Many different explanations have been proffered for the “new normal” of “secular stagnation” in the global economy ever since the Great Recession. This is supposed to be exemplified by low growth, verging on stagnation, in the advanced economies, now combined with slower growth in the developing world.

Certainly the recovery from the Great Recession of 2008-09 has been anaemic at best, even as it has failed to generate much employment outside of the US (and even there it has created mostly casual, part-time and poor quality jobs). Deflation has persisted in Japan for many years now, and has become evident in the Eurozone and the US as well. Financial markets are febrile and display nervously erratic behaviour, often without proximate cause – such as in the recent collapse in bond yields across the advanced economies.

But purely in terms of GDP growth, are the last five years really so very different from past patterns of global capitalism, even compared to the supposedly more dynamic period of globalisation? Chart 1 tracks annual GDP growth in developed and developing/transition economies from 1990. The period from 2002 to 2007 does show acceleration of growth across economies, but that came to end in the collapse of 2008-09, and since then GDP growth rates have been similar to those of the 1990s. 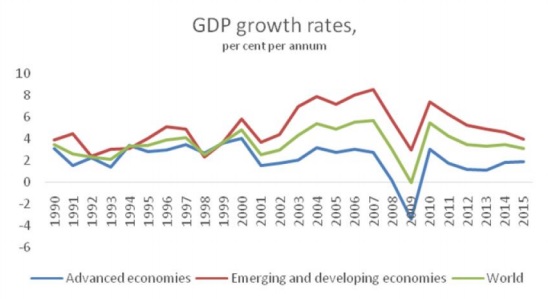 Indeed, that boom period in the 2000s could even be seen as more of an aberration. It is well known that the dynamism generated by US expansion – which in turn was driven by a finance-driven bubble centred around the US housing market – pulled the global economy into a brief period of rapid growth. This was associated with faster growth in some developing countries, particularly China, with implications for the nature and spread of economic activity.

But, precisely because it was based on a bubble, it was by definition short-lived. The inevitable collapse brought a very sharp downturn – with output declining for the advanced economies taken together, and decelerating sharply for the developing world. The “recovery” thereafter could simply be seen as a return to the more sedate growth rates that were evident in the first decade of globalisation.

But that does not mean there are no reasons for concern. First, the boom of the mid-2000s was an unsustainable bubble generated by finance, which had become the only means of generating expansion given the wage suppression and rising inequality that increasingly characterised capitalism. The realisation problem created by wage suppression – the growing difficulty of finding markets for production if mass incomes are not rising – can be answered through credit bubbles only as a very temporary solution, and one that necessarily gives rise to problems of its own. Once the bubble bursts, the need for private agents – both households and companies – to clean up their balance sheets means that deleveraging adds a further negative impetus to economic activity. So there are limits to using this as a way out of the stagnationary tendencies inherent in advanced capitalism.

In addition, there are other ways in which the world economy is different, and why similar growth rates today cannot be seen as simply a return to status quo ante of the pre-global crisis years. Consider, for instance, the behaviour of investment rates, as shown in Chart 2. Investment rates in the advanced economies kept declining throughout the period of globalisation, even though it was supposed to provide favourable incentives for investment to private players. Various factors have contributed to this, including the emphasis since 2010 on fiscal austerity, which has reduced the positive effects that public investment could have had on private investment.

Investment rates in the developing world did indeed increase significantly in the boom years of the 2000s and have since tapered off. But it is noteworthy that they have remained high even as output has decelerated after 2010. So something is awry in the accumulation process in developing countries, which may have to do with the falling effectiveness of investment in generating more output in some larger economies like as China. So it is not only the stagnation of global demand that is a problem – which indeed it is – but the fact that relatively high rates of investment no longer serve to deliver as much output as earlier. 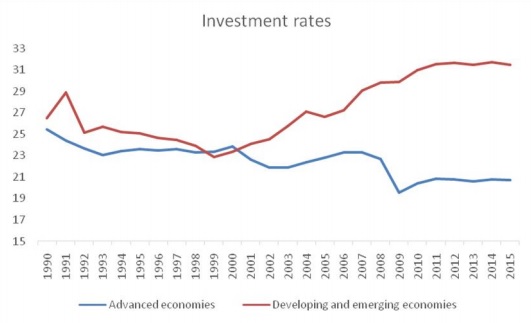 The other significant difference is that the global economy is now awash with supply of liquidity, because of the peculiarly one-sided response to the crisis in the developed world. Aside from the brief period just after the crisis, in 2009, expansionary fiscal policy has effectively been discarded as a possible response. Monetary policy has become not just the preferred instrument, but in most cases the only instrument, to deal with the threat of economic downturn. And this monetary policy also tends to be rather limited, focussed on “quantitative easing” and near-zero interest rates that deliver the potential to provide credit to banks but do not provide purchasing power to those who would use those resources to spend more and thus raise aggregate demand.

Since January 2008, total assets of the major central banks (which barely increased in the previous decade, or increased only very sluggishly) went up from around $6.5 trillion to $16.9 trillion. Excluding assets held by the People’s Bank of China (much of which are the foreign exchange reserves of the country) the assets held by all central banks went up from just under $4 trillion to nearly $12 trillion (Source: Central Bank Balance Sheets, www.yardeni.com).

The US Federal Reserve was the leader of that pack, as Chart 3 indicates. Further, after the initial post-crisis increase, the fastest and largest increase in liquidity creation by the US Fed took place in the third round of QE, between 2012 and 2014 – well after the so-called recovery was in place. The subsequent “tapering” of QE that caused so much grief to emerging markets by instigating capital flight back to the US, still left overall assets of the US Fed at unprecedented high levels. 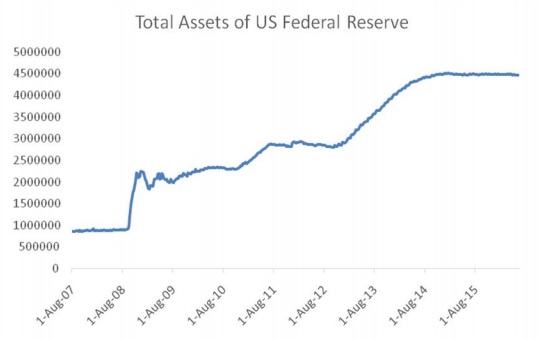 But this massive injection of liquidity has only just managed to maintain some semblance of growth in the advanced economies. Meanwhile, many developing countries and emerging markets are feeling the ill effects of their own credit bubbles that they created in response to the global crisis, as credit to GDP ratios and non-performing loans have risen sharply. This adds a further depressing element to the already listless patterns of investment and consumption. Debt-fuelled expansion cannot work anymore, yet policymakers everywhere seem to think that the more sustainable and desirable option of increasing wage incomes is simply unacceptable.

It does indeed appear as if global capitalism is running out of options. This is why “the new normal” may seem a bit like the old one, but in fact is much more dangerous.