This is Naked Capitalism fundraising week. 918 donors have already invested in our efforts to combat corruption and predatory conduct, particularly in financial realm. Please join us and participate via our Tip Jar, which shows how to give via check, credit card, debit card, or PayPal. Read about why we’re doing this fundraiser, what we’ve accomplished in the last year, and our fourth goal, burnout prevention

By Maria Demertzis, a fellow at Bruegel and a visiting professor at the University of Amsterdam. She has previously worked at the European Commission and the research department of the Dutch Central Bank. Originally published at Bruegel

The attempt to address the problem of non-performing loans in the EU should tackle both sides of credit creation at once.  On the demand side, new credit is not picking up as long as the problem of the debt overhang, namely the disincentive of undertaking new investments and consumption while old debts are prohibitively high, remains.  This, hinders the creation of new productive capacity, necessary to absorb factors formerly misallocated to sectors hit by the crisis. By implication, as long as private debts remain at high levels, economic activity will struggle to pick up. On the supply side of credit, progress has been slow in resolving impaired loans, which persist in banks’ balance sheets. This is problematic for both their overall health but also the creation of new credit. 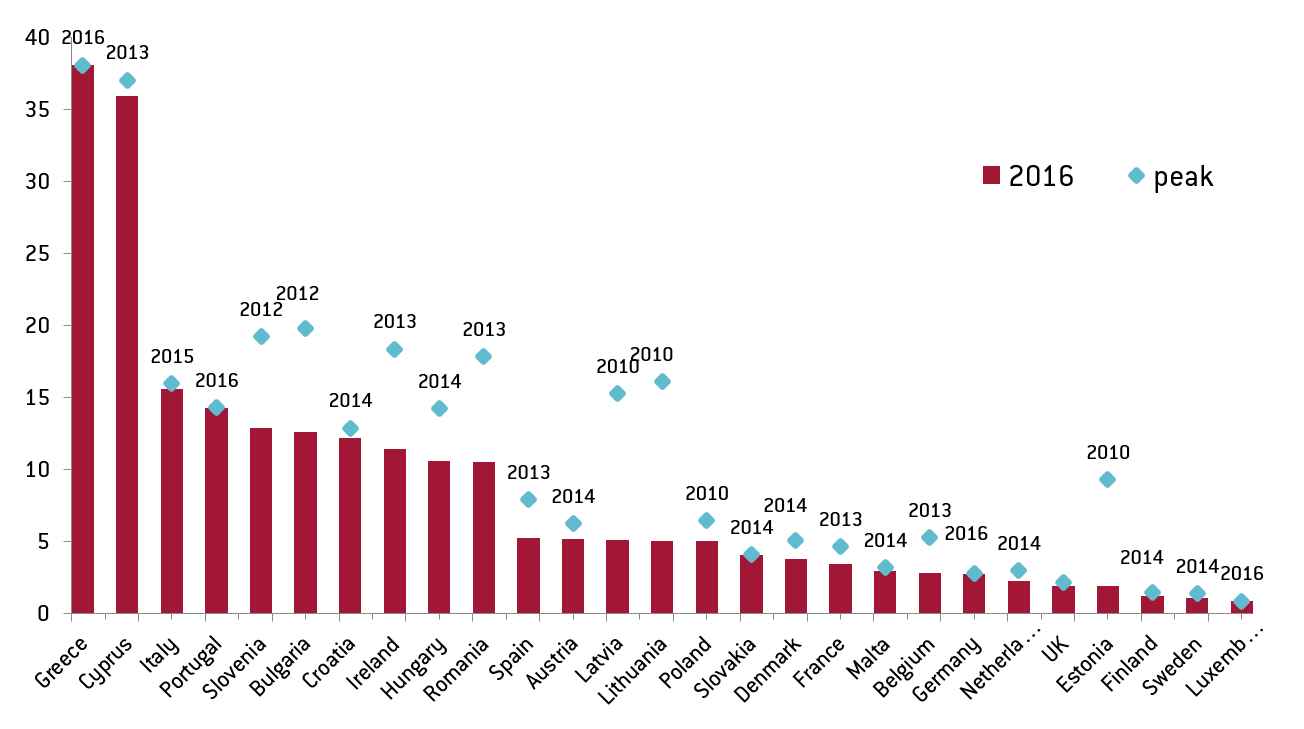 And while a number of countries (namely the Baltics) have managed to decisively resolve bad debts to the benefit of new credit creation, others have made less progress and some have even been unable to make any (Figure 1). The ECB recently issued draft guidelines in an attempt to pool resources and address the issue.

I argue here that an important guiding principle in resolving NPLs should be to ensure that viable debt remains serviced, while non-viable debt gets resolved. But this is not the same as resolving non-performing debt while holding on to performing debt. It helps therefore to categorise loans in two dimensions: viability and ability to service themselves.

Table 1 then provides four possible ways of classifying loans. Performing loans are those that are effectively being serviced and paid back. Viable loans are those for which the underlying assets generate sufficient value to cover funding costs.

Good loans are then, productive loans that are being serviced. This is the only category where debt has a productive role.

Bad loans by contrast are those that do not perform, but also those for which the activities they had financed do not generate enough value.  Aiming to resolve these loans in a swift and timely way should be encouraged, as the only way of identifying losses and reducing uncertainty for creditors but also releasing debtors from unproductive activities (second chance).

Unproductive loans are then those which may actually perform in the sense of servicing payments, but do not themselves generate value. Collateralised loans can provide indicative examples here.

Consider a household in the following situation: the value of its house is smaller than the loan that financed it (negative equity); it is liable by law for that remaining difference, as is the case in European countries (full recourse), and has very little possibility of walking away from such obligation by declaring bankruptcy (say through strict insolvency rules). If the household chooses (or needs) to sell that house, additional resources would be needed to repay the loan in full. Also, since the possibility of walking away from such a liability is effectively not available, the household is left locked into servicing a loan which is economically unattractive, as it is larger than the value of the house.

Protecting creditor rights is of course an important reason why insisting on servicing such debt may be a good idea. But when housing markets have gone through sharp corrections, followed typically by a downturn in the business cycle, such arguably unproductive loans may not be isolated cases, but rather wider spread. From a macroeconomic perspective, one ought to therefore at least consider whether the benefits of “creative destruction” outweigh the costs of violating creditors’ rights. The European Commission alludes to this in its last country report for the Netherlands.

Finally, there is also a category of temporarily distressed loans or strategic defaults. This includes either debts that are temporarily in distress but could return to being performing or loans that are non-performing by choice. The latter are the result of moral hazard where debtors choose not to pay back debt even when economically feasible. Evidence shows that strategic defaults increase as negative equity on mortgages increases, and especially when there is no full recourse. However, households’ likelihood to default strategically is shown to be also associated with perceptions of fairness, but also decreasing with the perceived risk of negative consequences of doing so (stigma, negative credit ratings etc). In this respect, indiscriminate protection of debtors or the less than perfect ability to collect collateral may lead to more strategic defaults.

Given the four categories presented above, understanding debtors’ true ability to pay back debts and restructure appropriately is crucial in this process. But aligning incentives between the different parties involved, creditors, debtors and relevant institutions (supervisors, regulators but also tax authorities and courts) is equally important.

The aim is to have as much debt fall in the “good” category. If loans are only temporarily distressed, they need to be identified as such and assisted in becoming productive again. Banks should be incentivized to deal with this in a timely manner.

Unproductive loans could be reduced if, for example, the possibility of walking away from debts through bankruptcy was not protracted and/or unforgiving. But here, while banks do not have an immediate incentive to either identify or deal with such loans, macroeconomic policy makers do, in particular when their size is systemic to the economy. Data on debtors failing to make other payments, like taxes or health insurance contributions, could serve as important indicators of financial distress. Such loans should then be assisted in becoming “bad”, which in turn should be treated swiftly to help redirect resources to productive activities. Enforcement and the rule of law are important in identifying “non-performance”; aligned incentives and bank involvement are important in determining “viability”.