This is Naked Capitalism fundraising week. 1031 donors have already invested in our efforts to combat corruption and predatory conduct, particularly in financial realm. Please join us and participate via our Tip Jar, which shows how to give via check, credit card, debit card, or PayPal. Read about why we’re doing this fundraiser, what we’ve accomplished in the last year, and our fifth goal, more original reporting.

Yves here. van Onselen is on a roll. This is an important bit of analysis, and is consistent with my views, which my economist interlocutors agree with: that the oft-made argument that demographics, by which they really mean population growth, is economic destiny is largely bunk. I lived in Oz in 2002 to 2004 when Australia had had the best run of economic growth of advanced economies despite (or perhaps due to) being on the sidelines in the Internet boom. And its population growth had been modest over that time frame.

By Leith van Onselen, an economist who has previously worked at the Australian Treasury, Victorian Treasury, and Goldman Sachs. Originally published at MacroBusiness

This site has gone to considerable effort to demonstrate why high population growth (immigration), as advocated by Australia’s major political parties, is very likely  lowering the living standards of existing residents. 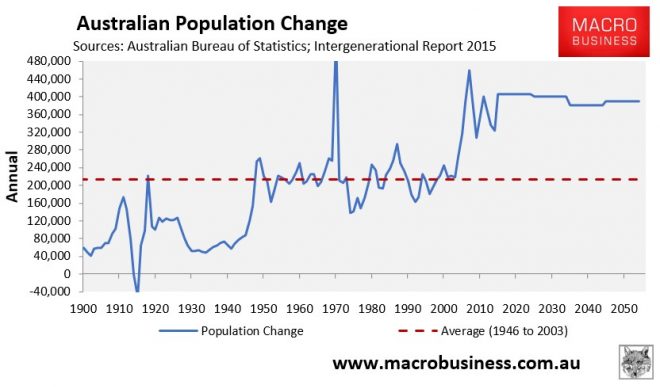 Since 2003, Australia’s population has grown by a whopping 22% – way faster than other advanced English-speaking nations and 2.5 times the OECD average: 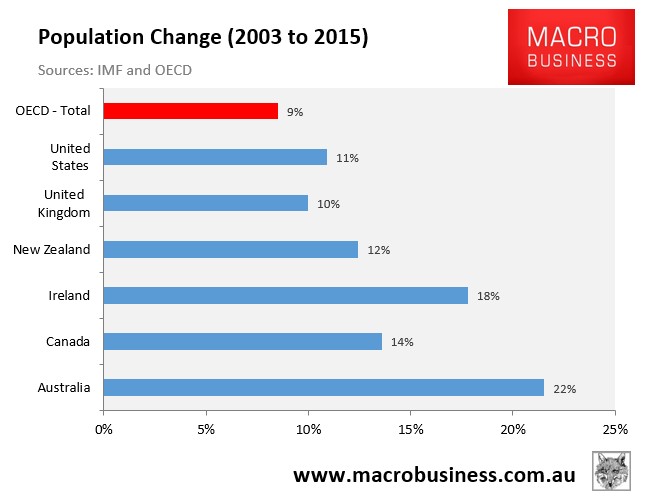 Since the immigration flood gates were jammed open in 2003, Australia’s per capita GDP and disposable income has grown at an anaemic rate compared to the previous corresponding 12-year periods (see below charts). 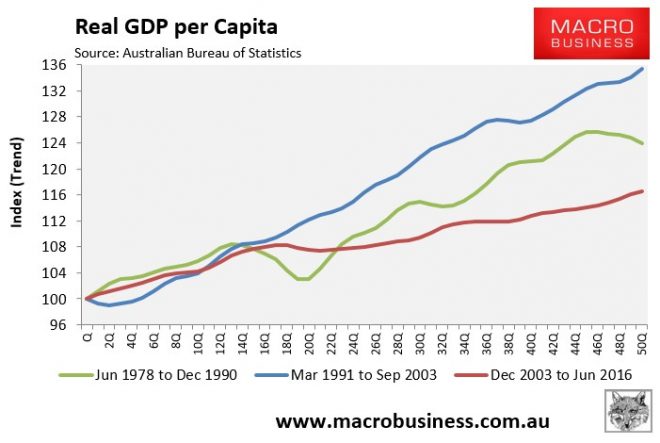 And this comes despite growth in the terms-of-trade being most favourable across the most recent 12-year period (see next chart). 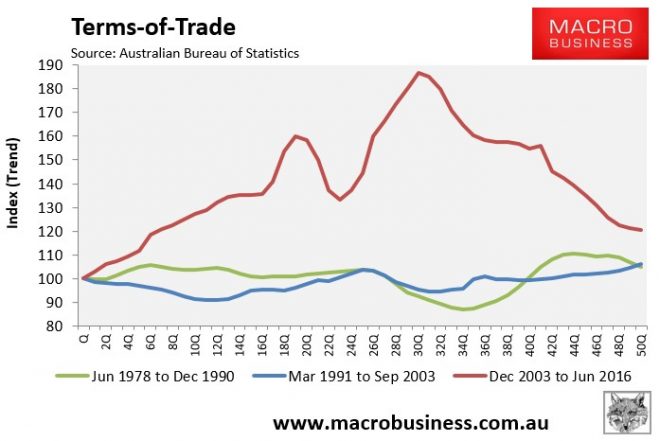 When viewed alongside qualitative measures like traffic congestion and housing affordability, which have clearly worsened as the population has exploded, there is a strong case to be made that Australia’s high population growth strategy is very likely lowering individual living standards.

Yesterday, I spent many hours crunching OECD macroeconomic data to determine whether there is a link between population growth and economic prosperity.

The first chart below is a scatter chart plotting the change in per capita real GDP against population over the years 2000 to 2015 across the 35 OECD member nations (Australia is shown in red): 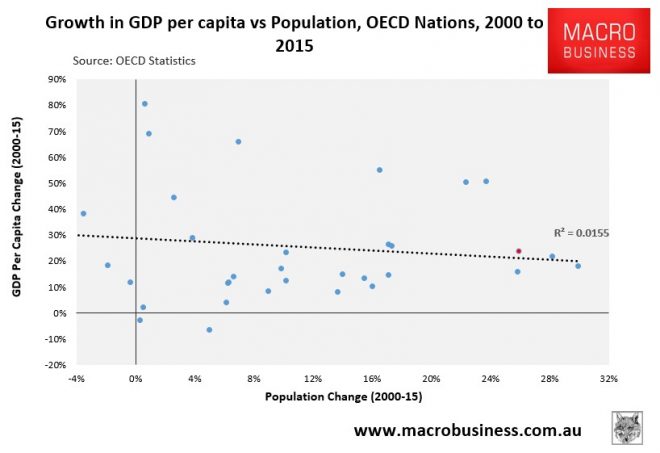 As you can see, there is no statistically significant relationship between the growth in the population and per capita real GDP across OECD member nations.

The next charts delve deeper and plot the change in population against measures of productivity. As explainedby the Productivity Commission (PC):

Productivity growth is a key source of long-term economic growth, business competitiveness and real per capita income growth. It is an important determinant of a country’s living standards and wellbeing.

There are two broad measures of productivity:

The first chart shows the relationship between population growth and labour productivity growth across the 35 OECD member nations over the period 2000 to 2015 (Australia shown in red):

The second chart shows the relationship between population growth and multifactor productivity growth across 20 OECD member nations (where data is available) over the period 2000 to 2014 (Australia shown in red): 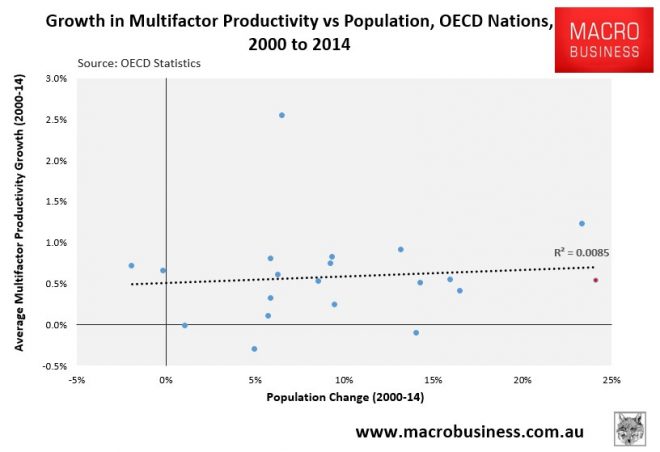 In both cases, there is no statistically significant relationship between population growth and productivity across OECD member nations.

Further, despite experiencing some of the highest population growth in the OECD, Australia’s productivity growth has been lackluster by comparison.  While this does not by itself suggest that Australia’s high immigration program has lowered productivity, it is nigh impossible to argue that it has raised it either.

Ultimately, the only real economic “benefit” that comes from running a high immigration program is via an improvement in Australia’s population pyramid as younger workers lower the average age profile and increase the ratio of working aged to non-working aged.  As explained by the PC: 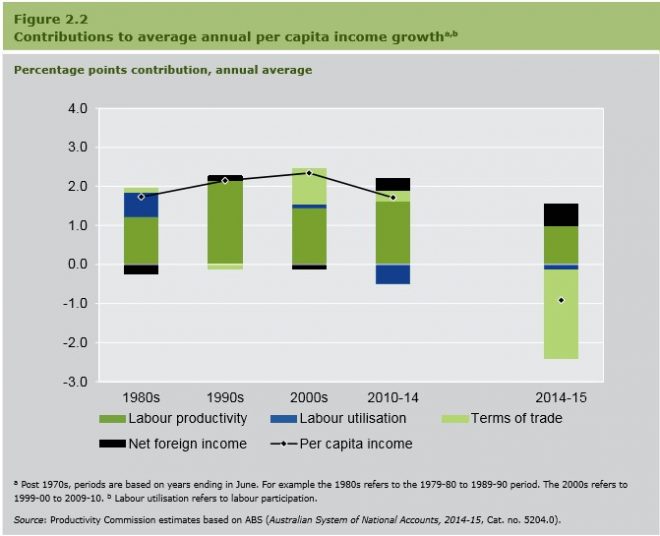 Growth in the population can increase the size of the economy but does not, in itself, increase output or income per capita. Growth of per capita income is determined by changes in participation (referred to as ‘labour utilisation’ in figure 2.2), labour productivity, the terms of trade and in net foreign income…

However, any benefit to labour utilisation is only transitory: as the migrants grow old they too add to the number of retired people, thus requiring ever more immigration and an ever bigger population to keep the age profile stable (classic Ponzi Demography).

Against these transitory benefits are the costs associated with pressures on infrastructure, housing , the environment, and in Australia’s case, the dilution of its fixed mineral endowment, which is a key driver of our wealth and living standards.

In short, the broad macroeconomic data – both domestic and international – does not support the assertion that Australia needs to run a high immigration program in order to drive the economy and increase living standards. In fact, given the significant qualitative costs – for example, the degradation of the environment, the depreciation of natural resources and decline in individuals’ quality of life – there is significant cause to dial Australia’s immigration program right back.