Slowish action overnight with the US closed but one measure hit new wides. European bond spreads continue to blow out:

French yields are now at their widest to German since 2012, the FT explains:

The premium for 10-year French debt climbed to a fresh post-eurozone crisis high over equivalent German Bunds on Monday, reflecting investor jitters about France’s upcoming presidential election. The yield gap exceeded 0.81 percentage points for the first time since August 2012 as France’s 10-year bond yield — which reflects the government’s borrowing costs — leapt 7 basis points today to 1.1 per cent. Renewed selling pressure was sparked by a latest poll showing Marine Le Pen is on course to emerge as a clear winner in the first round vote to be held in late April. Ms Le Pen, who has promised to hold a referendum on France’s eurozone membership, is polling at 27 per cent in the first round vote, with her two main rivals, François Fillon and Emmanuel Macron tied at 20 per cent, according to latest collated polls from OpinionLab.

More alarmingly, Le Pen also surged in the second round poll to her highest in recent times: 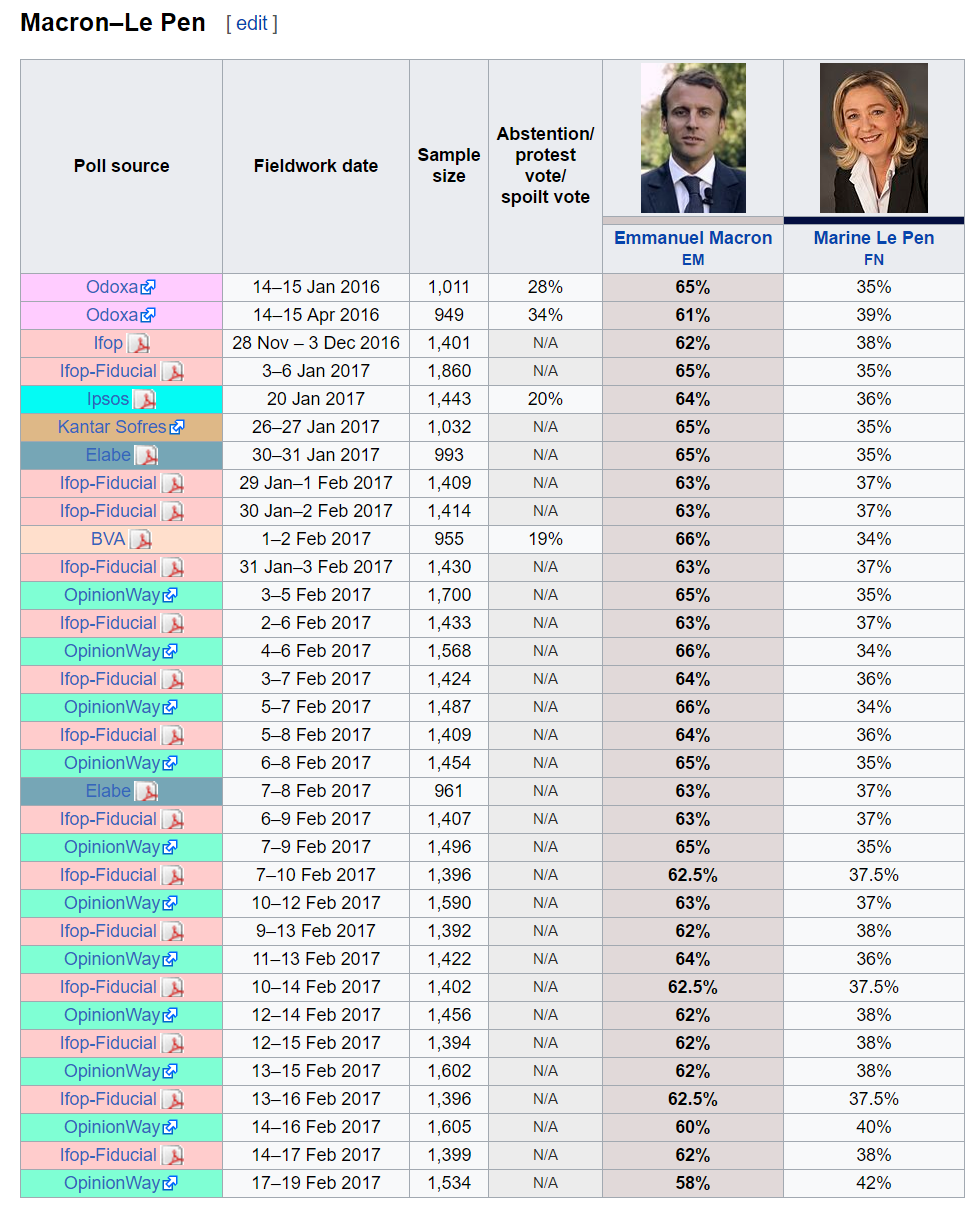 Though the gap remains wide. As we know, Le Pen would unleash Hell as she engineered a French exit from the euro, effectively ending the single currency and triggering a major global shakeout.

Meanwhile, in Germany, there is hope that that nation may go the other way, via Reuters:

Germany’s center-left Social Democrats (SPD) have moved ahead of Chancellor Angela Merkel’s conservative Christian Democrats (CDU/CSU) in an opinion poll by the Emnid institute for the first time since 2006, Bild am Sonntag newspaper said.

The SPD’s unexpected surge of some 12 points in the last month has caught Merkel and her conservatives off guard, analysts said, just seven months before the Sept. 24 election, where she had expected to win a fourth term easily.

The Emnid poll of 1,885 voters gave the SPD 33 percent of the vote, up 1 point in the last week, while the Christian Democrats (CDU) and their Bavarian sister party the Christian Social Union (CSU) would win 32 percent, down 1 point.

The SPD has now gained a record-breaking 12 points in the last four weeks, according to Bild am Sonntag newspaper, since former European Parliament president Martin Schulz was named as its candidate to run against Merkel in the Sept. 24 election.

“The increase is unmatched in the history of the Bild am Sonntag polls,” the newspaper wrote.

It has been quite a surge: 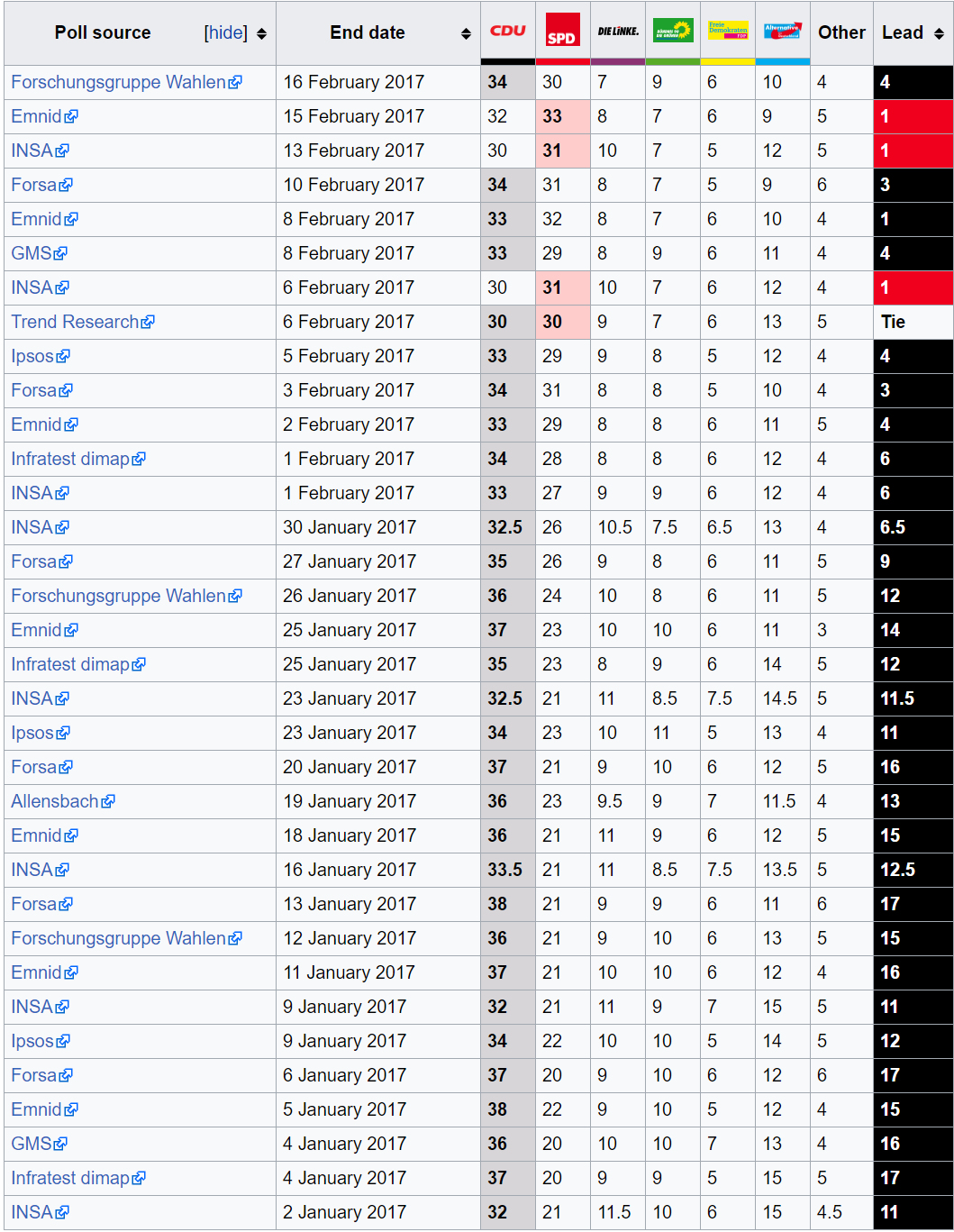 Perhaps most significantly, the SDP is a fan of closer European integration including eurobonds, also from Reuters:

Chancellor Angela Merkel’s conservatives on Monday rebuked Martin Schulz, the new Social Democratic leader who will run against her in September’s elections, for calling for “euro bonds” in the single currency bloc to relieve its debt crisis.

Peter Tauber, the Christian Democratic (CDU) general secretary and campaign manager, said the party intended to remind voters ahead of the Sept. 24 vote that Schulz, a former European Parliament president, had long advocated the introduction of EU-wide debt – anathema to many in Germany.

“He is the man who was for a mutualisation of debt,” Tauber told reporters in Berlin. He also said Schulz was “the man who wanted to allow Turkey to join the European Union” – another hot button issue that alarms many conservatives.

Germans fear that eurobonds would lead to higher interest rates in Germany, Europe’s biggest and most prosperous economy, and relax pressure on Greece, Italy and Spain to stick with their austerity programmes.

In her 2013 election campaign, Merkel spoke out clearly and often against eurobonds and debt mutualisation. Tauber presented a nine-page dossier on criticisms of Schulz that the CDU plans to use during the coming election campaign.

Maybe so, but this is now a political question as well. The failure to fiscally integrate Europe is a primary driver of the rise of populist de-globalising parties in the periphery (and even France). An SPD that reignites integration reform could unleash fiscal stimulus across the Continent and help fight the rise of extremism via more widespread growth. Sure debt and interest rates would rise but Germans may at last realise that that’s a worthwhile trade off.

This bears very close watching for current MB allocations. A revitalised European project would lift the euro dramatically and implicitly hit the US dollar as markets accelerated the timing for ECB tightening. It would thus also add a double tail wind to commodities as Europe released the spigot on fiscal spending, likely to be infrastructure, and a monetary tailwind as the US dollar bull market was held back. The Aussie dollar could fly in this scenario though it may also coincide with the slowdown in Chinese housing.

That said, if the pressure comes off the US dollar then that economy too will grow more strongly, adding weight to the S&P500. Gold is unlikely to benefit overly despite the easing US dollar owing to a clear easing in the existential European threat.