John Fullerton’s white paper, Regenerative Capitalism, lists eight principles critical to systemic economic health. The Capital Institute’s research group, RARE[1], uses recent scientific advances – specifically, the physics of flow[2]– to create a logical and measurable explanation of how these principles work to make or break vitality in the human networks of which economies are built.

I hate to come off like a nay-sayer, because I have no doubt that the underlying methodology is useful. But this sounds an awful lot like a new improved version of system dynamics, which the economics profession successfully beat back in the 1970s. As we discussed long form in ECONNED, orthodox economics rests on the assumption that economies have a natural propensity to equilibrium, and that equilibrium is full employment. As Paul Samuelson stressed, that assumption is necessary for economics to be science, as in mathed up, and the dominance that economists have achieved is due to their scientific appearances and the fact that their mathematical exposition enables them to dismiss lay critics.

Thus any analytical method, like systems dynamics or “the physics of flow” that allow for positive feedback loops (as in self-reinforcing instability) must be aggressively rejected by economists as a threat to their standing and rice bowls.

Having said that, I wish this post did not start with the Oxfam report, which suffers from serious methodological flaws. It’s not hard to make the case that wealth concentration is only getting worse, and there is solid work by people who have been tracking this trend over decades, such as Emanuel Saez and Thomas Piketty (Gabriel Zuc is a rising star on this beat; in fairness, the article does include some Piketty and Saez data further down). There’s no need to overegg the pudding.

According to a recent study by Oxfam International, in 2010 the top 388 richest people owned as much wealth as the poorest half of the world’s population– a whopping 3.6 billion people. By 2014, this number was down to 85 people. Oxfam claims that, if this trend continues, by the end of 2016 the top 1% will own more wealth than everyone else in the world combined. At the same time, according to Oxfam, the extremely wealthy are also extremely efficient in dodging taxes, now hiding an estimated $7.6 trillion in offshore tax-havens.[3]

Why should we care about such gross economic inequality?[4] After all, isn’t it natural? The science of flow says: yes, some degree of inequality is natural, but extreme inequality violates two core principles of systemic health: circulation and balance. 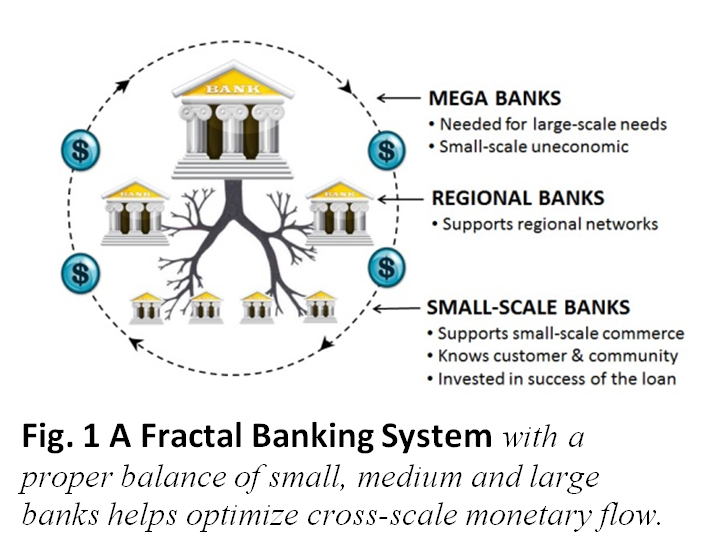 In flow systems, balance is not simply a nice way to be, but a set of complementary factors – such as big and little; efficiency and resilience; flexibility and constraint – whose optimal balance is critical to maintaining circulation across scales. For example, the familiar branching structure seen in lungs, trees, circulatory systems, river deltas, and banking systems (Fig. 1) connects a geometrically constant ratio of a few large, a few more medium-sized, and a great many small entities. This arrangement, which mathematicians call a fractal, is extremely common because it’s particular balance of small, medium, and large helps optimize circulation across different levels of the whole. Just as too many large animals and too few small ones creates an unstable ecosystem, so financial systems with too many big banks and too few small ones tend towards poor circulation, poor health, and high instability.

In his documentary film, Inequality for All, Robert Reich uses virtuous cycles to clarify how robust circulation of money serves systemic health. In virtuous cycles, each step of money movement makes things better. For example, when wages go up, workers have more money to buy things, which should increase demand, expand the economy, stimulate hiring, and boost tax revenues. In theory, government will then spend more money on education which will increase worker skills, productivity and hopefully wages. This stimulates even more circulation, which starts the virtuous cycle over again. In flow terms, all of this represents robust constructive flow, the kind that develops human and network capital and enhances well-being for all.

Both vicious and virtuous cycles have occurred in various economies at various times and under various economic theories and policy pressures. But, for the last 30 years, the global economy in general and the American economy in particular has witnessed a strange combination pattern in which prosperity is booming for CEOs and Wall Street speculators, while the rest of the economy – particularly workers, the middle class, and small businesses – have undergone a particularly vicious cycle. Productivity has grown massively, but wages have stagnated. Consumption has remained reasonably high because, in an effort to maintain their standard of living, working people have: 1) added hours, becoming two-income families, often with two and even three jobs per person; and 2) increased household debt. Inequality has skyrocketed because effective tax rates on the 1% have dropped (notwithstanding a partial reversal under Obama), while their income and profits have risen steeply.

We should care about this kind of inequality because history shows that too much concentration of wealth at the top, and too much stagnation everywhere else indicate an economy nearing collapse. For example, as Reich shows (Figure 1a & b), both the crashes of 1928 and 2007 followed on the heels of peaks in which the top 1% owned 25% of the country’s total wealth. 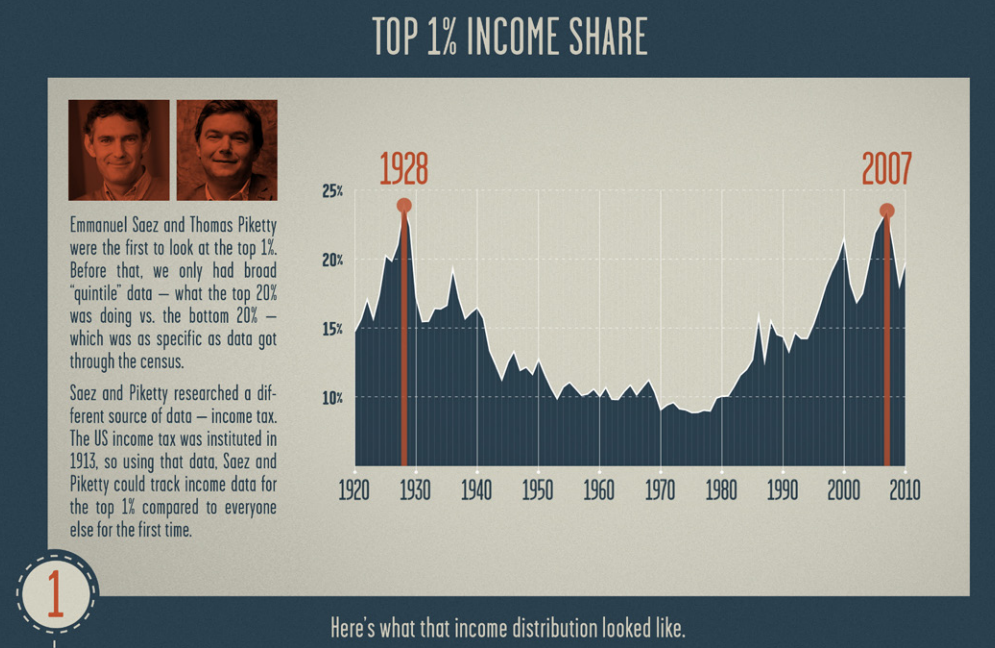 What accounts for this strange mix of increasing concentration at the top and increasing malaise everywhere else? Putting aside the parallels to 1929 for a moment, most common explanations for today’s situation include: the rise of technology which makes many jobs obsolete; and globalization which puts incredible pressures on companies to lower wages and outsource jobs to compete against low-wage workers around the world.

But, while technology and globalization are clearly creating transformative pressures, neither of these factors completely explains our current situation. Yes, technology makes many jobs obsolete, but it also creates many new jobs. Yet, where the German, South Korean and Norwegian governments invest in educating their workforce to fill those new jobs, the American government has been cutting back on education for decades. A similar thought holds for globalization. Yes, high-volume industrialism – that is, head-to-head competition over price of mass-produced, uniform goods – leads to a race to the bottom; that’s been known for a long time. But in The Work of Nations (2010), Robert Reich also points out that the companies that are flourishing through globalization and technology are ones pursuing what he calls high-value capitalism, the high-quality customization of goods and services that can’t be duplicated by mass-produced uniformity at cheap places around the world.

So, while the impacts of globalization and technology are profound, the real explanation for inequality lies primarily with an economic belief that, intentionally or not, serves to concentrate wealth at the top by extracting it from everywhere else. This belief system is called variously neoliberalism, Reaganomics, the Chicago School, and trickle-down economics. It is easily recognized by its signature ideas: deregulation; privatization; cut taxes on the rich; roll back environmental protections; eliminate unions; and impose austerity on the public. The idea was that liberating market forces would cause a rising tide that lifted all boats, but the only boat that actually rose was that of the .01%. Meanwhile, instability has grown.

The impact this belief system has had on the American economy and its capacities can be seen in American education. Trickle-down theories are all about cutting taxes on the wealthy, which means less money for public education, more young people burdened with huge college debt, and fewer American workers who can fill the new high-tech jobs.

To be fair, this process is not just about greed. Most of the people who participate in this economic debacle do not realize its danger because they believed what they were told by the saints and sages of economics, and many are rewarded for following its principles. So, what really causes the kind of inequality that drives economies toward collapse? The basic answer from the science of flow is: economic necrosis. But, let me flesh out the story.

Institutional economists talk about two main types of economic strategies: extractive and solution-seeking. (Hopefully, these names are self-explanatory.) Most economies contain both. But, if the extractive forces become too powerful, they begin to use their power to rig the rules of the economic game to favor themselves. This creates what scientists call a positive feedback loop, one in which “the more you have, the more you get.” Seen in many kinds of systems, this loop creates a powerful pull that sucks resources to the top, and drains it away from the rest of the system causing necrosis. For example, chemical runoff into the Gulf of Mexico accelerates algae growth. This creates an escalating, “the more you have, the more you get” process, in which massive algae growth sucks up all the oxygen in the surrounding area, killing all of the nearby sea life (fish, shrimp, etc.) and creating a large “dead zone.”

Neoliberal economics set up a parallel situation by allowing the wealthy to use their money to extract ever more money from the overall economy. The uber-wealthy grow wealthier by:

All of these processes help the already rich concentrate more, and circulate less. In flow terms, therefore, gross inequality indicates a system that has: 1) too much concentration and too little circulation; and 2) an imbalance of wealth and power that is likely to create ever more extraction, concentration, unaccountability, and abuse. This process accelerates until the underlying human network becomes exhausted and/or the ongoing necrosis reaches a point of collapse. When this point is reached, the society will have three choices: learn, regress, or collapse.

What then shall we do? Obviously, we need to improve our “solution seeking” behavior in realms from business and finance to politics and media. Much of this is already taking place. From socially-responsible business and alternative forms of ownership, to democratic reform groups, alternative media, and the new economy movement – reforms are arising on all sides.

But, the solutions we need are also often blocked by the forces we are trying to overcome, and impeded by the massive merry-go-round momentum of “business as usual.” Today’s reforms also lack power because they are taking place piecemeal, in a million separate spots with very little cross-group unity.

How do we overcome these obstacles? The science of flow offers not so much a specific strategy, as an empowering change of perspective. In essence, it provides a more effective way to think about the processes we see every day.

The dynamics explained above are very well known; they are basic physics, just like the law of gravity. Applying them to today’s economic debates can be extremely helpful because the latter have devolved into ideological debates devoid of any scientific foundation.

We believe Regenerative Economics can provide a unifying framework capable of galvanizing a wide array of reform groups by clarifying the picture of what makes societies healthy. But, this framework will only serve if it is backed by accurate theory and effective measures and practice. This soundness is part of what Capital Institute and RARE are trying to develop.