Yves here. While most readers are on board with the idea that austerity is economically counterproductive, as well as politically destabilizing, it’s nevertheless important to see more and more economists, approaching the question from different angles, come to the same conclusion.

Austerity policies implemented during the Great Recession have been blamed for the slow recovery in several European countries. Using data from 29 advanced economies, this column shows that austerity policies negatively affect economic performance by reducing GDP, inflation, consumption, and investment. It also warns that efforts to reduce debt through austerity in the depths of the economic recession were counterproductive.

Since the Great Recession of 2008–2009, recovery rates have varied widely across Europe. At one end of the spectrum is Greece, for which the ‘recovery’ never began. Greece’s per capita income at the end of 2014 was more than 25% below its 2009 level. Although Greece’s GDP performance is exceptionally negative, a contraction in GDP over the post-crisis period is not unique – about a third of European countries experienced net reductions in GDP between 2009 and 2014. At the other end of the spectrum is Lithuania. Like Greece, Lithuania experienced a strong contraction during the recession. Unlike Greece, however, Lithuania returned to a rapid rate of growth quickly thereafter.

The financial press and many economists have pointed to austerity policies that cut government expenditures and increased tax rates as an explanation for the slow recovery in several European countries (e.g. Blanchard and Leigh 2013, Krugman 2015). Our analysis finds that variation in austerity policies can in fact account for the differences in economic performance, and that these policies are sufficiently contractionary to contribute to increases in debt-to-GDP ratios in high-debt economies (House et al. 2017).

As a measure of austerity, we use the difference between predicted government purchases and actual government purchases (Blanchard and Leigh 2013). Our forecasts of government purchases include information about the current state of the economy. Thus, the resulting forecast errors can be interpreted as departures from ‘normal’ fiscal policy reactions to economic fluctuations. If spending typically increases during a recession but does not do so in the aftermath of the crisis, our procedure categorises that spending path as ‘austere’.

We compare our austerity measures to similarly constructed forecast errors for GDP, inflation, and other measures of economic performance. The scatterplot in Figure 1 shows the relationship between average forecast errors for GDP and government purchases in the post-crisis period (2010–14). Solid dots represent countries in the Eurozone or countries with exchange rates pegged to the euro. Open dots represent countries with floating exchange rates. The dot in the bottom right corner is Greece (GRC). Government purchases in Greece fell by almost 9% relative to pre-crisis GDP. At the same time, GDP in Greece fell by nearly 20%. In contrast, government purchases and GDP were close to their predicted values in Switzerland, Germany, and Sweden. On average, countries with more austere policies experienced greater shortfalls in GDP. The cross-sectional multiplier (the slope of the fitted line in the figure) is –2, meaning that for every €1 reduction in government purchases, GDP falls by €2. This estimate statistically controls for observed variations in taxes, productivity, debt ratios, and interest rate spreads. 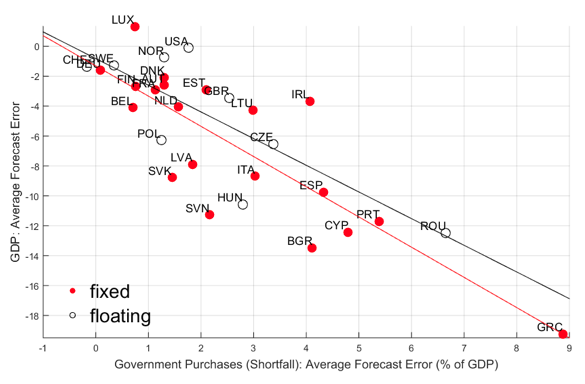 How austerity affects output and debt

Many observers have criticised macroeconomic models on the grounds that they are unable to explain the main driving forces behind the global recession and its aftermath. To address this criticism, we developed a multi-country New Keynesian dynamic stochastic general equilibrium (DSGE) model, calibrated to data on country size, trade linkages, and exchange rate regimes. In addition to the austerity shocks, we fed in shocks to the cost of firm credit as well as monetary policy shocks. This model allows us to isolate which features of the economy and which kinds of shocks are important for explaining the data. Overall, the model generates predictions that are very close to those found in the data. The cross-sectional multiplier of government purchases in the model is roughly –2, matching our reduced-form estimates. The model generates a positive relationship between austerity and net exports and a strong negative relationship between austerity and inflation.

To the extent that the model replicates the reaction of European countries to actual policy changes, we can use it to consider what might have occurred had policies been different. Figure 2 shows three counterfactual scenarios: the elimination of austerity, floating exchange rates and the dynamics of debt to GDP with and without austerity. The upper panels of Figure 2 show simulated GDP trajectories for the EU10 (Belgium, Germany, Estonia, France, Luxembourg, the Netherlands, Austria, Slovenia, the Slovak Republic, and Finland), and the lower panels show trajectories for GIIPS (Greece, Ireland, Italy, Portugal, and Spain). In the first experiment, we imposed the condition that the countries are at the zero lower bound (ZLB) in nominal interest rates. In a finding reminiscent of Nakamura and Steinsson (2014), the ZLB does not play a significant role in explaining the cross-sectional multiplier, although it is important for determining the relationship between government purchases and GDP over time (in effect, the ZLB would push down all the dots in Figure 1, leaving the slope unchanged). 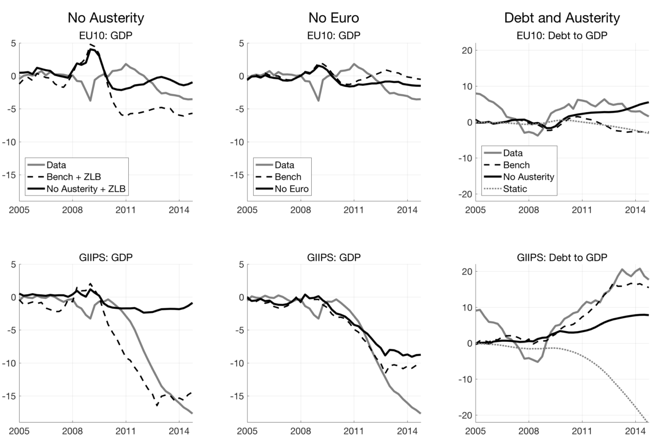 According to the model, had countries not experienced austerity shocks, aggregate output in the EU10 would have been roughly equal to its pre-crisis level, rather than showing a 3% loss. For the GIIPS economies, instead of experiencing an output reduction of nearly 18% below trend, the output losses would have been limited to 1% (the leftmost panels in Figure 2).

Allowing European nations to pursue independent monetary policy in the face of austerity shocks helps limit the drop in GDP (the middle panels of Figure 2). Relative to the benchmark model, allowing countries to have independent monetary policy would raise output for the GIIPS economies but would reduce output for the EU10. This is because the nominal exchange rate depreciates in the GIIPS region, stimulating exports and output. In contrast, under the euro, the EU10 already enjoys the export advantage of a relatively weak currency, so there is no additional benefit of a floating exchange rate.

Taking these channels into account (the ‘benchmark’ series), our model actually predicts an increase in the debt-to-GDP ratio in the GIIPS region, of a magnitude similar to that observed in the data. If no austerity measures had been implemented, the model predicts a more modest increase in the debt-to-GDP ratio for the GIIPS countries. Although we do not take the results of the model literally as a prescription for the European debt crisis, the model suggests that efforts to reduce debt through austerity in the depths of the economic recession were counterproductive.