Yves here. This post is simultaneously informative and frustrating. I first discussed the corporate savings glut in 2005, and co-authored a New York Times op-ed about it in 2010. As I wrote in 2010:

Rob Parenteau and I have an op-ed at the New York Times today. Rob’s last post here argued energetically that the now-established trend of the corporate sector to save, as opposed to invest in growth, in advanced economies, and even most emerging economies, was tantamount to capitalists abandoning their traditional role. It reminded me of an article I had written in 2005, “The Incredible Shrinking Corporation,” for the Conference Board’s magazine Across the Board, on how companies were trying to starve themselves into attractive- looking performance though the then-unprecedented act of saving in a time of economic expansion, which is tantamount to disinvestment. Rob’s post made further key points about the macroeconomic implications of corporate savings (given the norm of households savings as well) and made some policy recommendations….The draft was titled “It’s the Corporate Savings Glut, Stupid! The Hysteria of Marching to Austeria”:

On the one hand, the VoxEU article does a fine job of assembling long-term data on a global basis. It demonstrates that the corporate savings glut is long standing and that is has been accompanied by a decline in personal savings.

However, it fails to depict what an unnatural state of affairs this is. The corporate sector as a whole in non-recessionary times ought to be net spending, as in borrowing and investing in growth. As a market-savvy buddy put it, “If a company isn’t investing in the business of its business, why should I?” I attributed the corporate savings trend in the US as a result of the fixation of quarterly earnings, which sources such as McKinsey partners with a broad view of the firms’ projects were telling me was killing investment (any investment will have an income statement impact too, such as planning, marketing, design, and start up expenses). This post, by contrast, treats this development as lacking in any agency. Labor share of GDP dropped and savings rose. They attribute that to lower interest rates over time. They again fail to see that as the result of power dynamics and political choices.

You’ll observe that the rise in corporate savings corresponds to the start of the neoliberal era, roughly when Reagan and Thatcher took office. That is also when central bankers became more preoccupied with fighting inflation than promoting full employment, as a result of continuing to fight the last war of beating the 1970s stagflation (as well as becoming hostage to the ideology of the day). That meant central banks were explicitly in the business of weakening labor bargaining power by increasing the size of the reserve force of unemployed workers. The result was a long term tend of falling Treasury interest rates, which broke in May 2007, and stagnation of real wages as businesses captured the benefits of productivity growth, which had formerly been shared with laborers.

In the aftermath of the Global Crisis, economists and policymakers have been concerned that the pace of global recovery is constrained by the saving behaviour of firms and households. For example, Carney (2012) expresses concerns that the improvement in private-sector balance sheets is related to elevated uncertainty and lower spending, hiring, and capital investment. Alfaro et al. (2016) argue that, in an environment with financial frictions, the increase in uncertainty delays hiring and investment decisions and instead leads firms to hoard cash and reduce their debt positions.

In a new paper, we characterise patterns of sectoral saving and investment for a large set of countries over the past three decades (Chen et al. 2017). Consistent with previous studies such as Poterba (1987), we measure the flow of corporate saving from the national income and product accounts as undistributed corporate profits. Corporate saving together with government and household saving equal national saving. 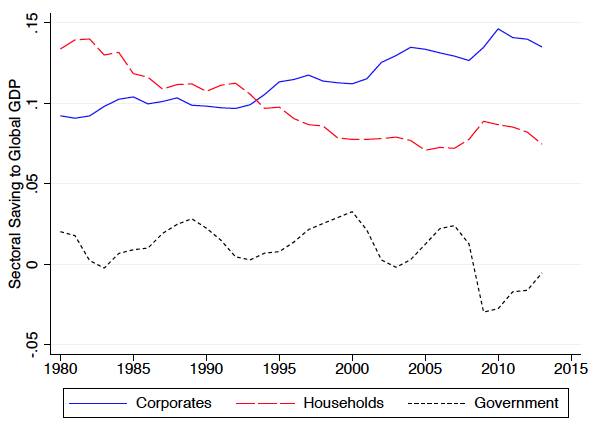 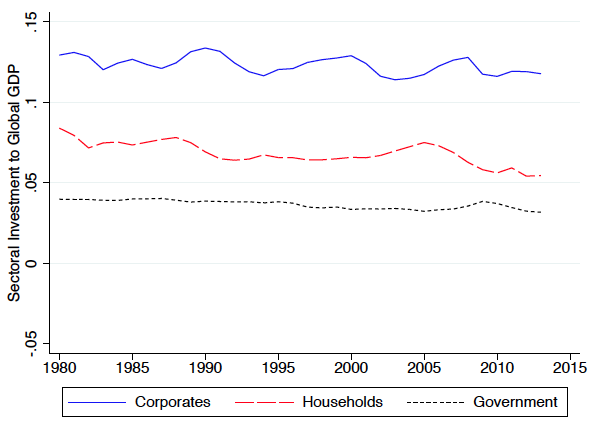 We find a global shift in the composition of saving away from the household sector and toward the corporate sector. The top panel of Figure 1 shows corporate, household, and government saving as a fraction of global GDP. Global corporate saving has risen from roughly 9% of global GDP in 1980 to almost 14% in 2015. Household saving has also exhibited a dramatic change but of the opposite sign, leaving the global total saving rate relatively constant. The bottom panel shows that, unlike saving, the sectoral composition of investment has been relatively stable over time. The corporate sector transitioned from a net borrower to a net lender of funds to the rest of the global economy. Contrary to common belief, this rise of corporate saving significantly predates the Global Crisis.

Corporate saving is undistributed (accounting) profits, or equivalently the part of corporate value added (or corporate GDP) that is not paid to taxes, to labour, to debt holders, or to equity holders. Using national accounts data, we document that taxes, interest payments, and dividends have remained essentially constant over time as a share of global GDP. Using firm-level data, we show that firms with larger increases in their (accounting) profits experienced larger increases in their saving rates but were not significantly different in their tax, dividend, or interest payments. The rise of corporate saving, therefore, emerged as the decline in the labour share pushed up corporate profits and dividend growth did not keep pace.1

How might multinational activity impact the rise of corporate saving? A multinational company’s saving is attributed to the country of its headquarters. Therefore, if production shifts to countries other than the headquarters, those countries’ measured corporate saving rates will be affected. One benefit of studying the rise of corporate saving in a dataset with many countries is that, to the extent that it is representative of the world economy, any such cross-country reshuffling of value added by multinationals should cancel out at the global level. Multinationals might also play an important role in driving the rise of corporate saving, given their (tax-driven) incentive and ability to shift profits across countries. We cannot precisely identify multinationals in our data, but we find that firms with significant income from foreign operations have indeed exhibited a larger trend increase in their saving rates than firms without significant foreign income. This larger trend increase in saving, however, comes from a larger trend increase in firm profits and not from differential changes in tax or dividend payments.

An increase in the flow of corporate saving relative to expenditures on physical investment implies an improvement in the net lending position of the corporate sector. How were these additional resources used? Among other possibilities, firms can buy back their shares, pay down their debt, and accumulate cash or other financial assets. Using firm-level data, we document that the balance sheet adjustment involved all three of these categories. However, we find interesting differences over time. Increases in firm net lending were more likely to be stockpiled as cash starting in the early 2000s, and were less likely to be used to buy back shares after the crisis.

Our analysis highlights that the proximate cause of the rise of corporate saving was the combination of a declining global labour share, and the stability of the dividend share of output. What might have been the deeper forces underlying these trends? We develop a model in which capital market imperfections such as dividend taxes, costs to raising equity, and debt constraints affect the flow of funds between corporations and households. We parameterise the model to represent the global economy in the early 1980s and feed into it changes in components of the cost of capital that we measure from the data – such as the declines in the real interest rate, corporate income taxes, and the price of investment goods – alongside an increase in firm markups and the slowdown of growth observed after the Great Recession. Our model generates a rise of corporate saving and a decline in household saving similar in magnitude to those observed in the data. The decline in the cost of capital and the increase in firm markups led to a decline in labour’s share and an increase in accounting profits. Given the stickiness of dividend payments, these additional resources were retained within the corporate sector rather than paid back to shareholders.