Yves here. This post gets a bit geeky at points, but it confirms what is a conclusion many readers may have made already: that nominal wealth and income in the US are misleading due to how many costs Americans bear that counterparts in other countries don’t, or don’t as much.

While wealth inequalities have received some attention, most academic, political, and public debates focus on inequalities in income. Concerning private wealth and international comparisons of wealth inequalities, research usually investigates the distributions of real and financial assets, debts and net worth.1 Net worth is the current value of all marketable or fungible assets (total gross wealth) minus debts.2 Differences in levels of, and inequalities in, these aggregates miss an important component of household wealth positions, namely, pension wealth – the discounted expected present value of future entitlements from public, occupational, and private pension schemes. Considering pension wealth is important because households in different countries make private savings decisions conditional on the country-specific characteristics of pension institutions. In particular, many studies show that (public) social security pension wealth serves as a substitute for other forms of private savings.3 Higher net worth in country A than in country B may indicate higher propensities to consume in the former. Yet if pension institutions are more generous in the latter, the opposite may be true.

A comprehensive measure that considers pension wealth in addition to real and financial assets is augmented wealth (Wolff 2015a, Wolff 2015b; Bönke et al. 2016). In a recent paper, we attempt to create a wealth database that allows us to conduct a systematic ‘head-to-head’ comparison of household net worth, pension wealth (including survivor pensions), and augmented wealth for two countries: the US and Germany (Bönke et al. 2017). The pension systems of both countries comprise three components: social security, occupational pension (including a government employee pension scheme), and private pension. Beyond these common features, their systems differ markedly with respect to generosity, coverage, attainment of entitlements, and type of financing. Our database builds on harmonised data from the Survey of Consumer Finances for the US and the Socio-Economic Panel for Germany in 2013 (see Bönke et al. 2016, Bönke et al. 2017).

Our data show that net worth holdings differ substantially between the two countries (Table 1). The mean for private households (in 2013 US dollars and purchasing power parity (PPP) adjusted) is about $183,000 in Germany versus about $337,000 in the US. This gives a ratio of about 1.84 in favour of US households. The gap for median net worth is smaller and the median is even slightly higher in Germany – almost $50,000 compared to $40,000 in the US. For the 75th percentile, we also find a small difference in favour of German households. In both countries, net worth for the 25th percentile is zero. These numbers suggest that net worth in the US is more concentrated at the top of the distribution.

Adding pension wealth implies a sizeable reduction of the wealth ratio of the two countries. Augmented wealth holdings of the average US household are about $650,000, or 1.4 times the holdings of an average German household of about $473,000. This difference is mainly driven by the higher net worth of US households that belong to the top of the augmented wealth distribution. Up to the 75th percentile, households in Germany possess larger assets. For example, the 25th percentile value of augmented wealth is about $149,000 versus $86,000 in the US.4

Table 1 Household wealth in the US and Germany 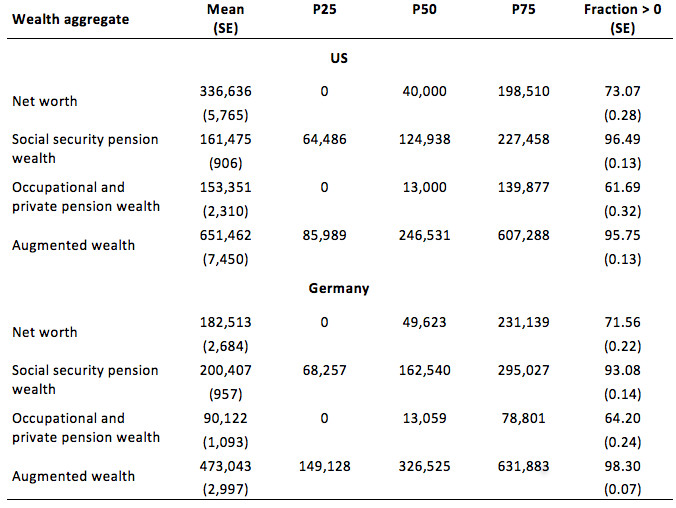 Household Portfolios of US and German Households Are Different

Concerning debt, total household debt in the US is, at about $91,000 on average, 2.5 times higher than in Germany ($36,000). Mortgage debt on owner-occupied property makes up the largest relative portion in both countries: 74% in the US and 61% in Germany. Debt ratios in the US are also higher than those in Germany, with respect to both income and net worth. These numbers suggest that the willingness to go into debt is much greater in the US, and access to credit markets appears to be easier there than in Germany. Table 3 presents Gini coefficients for the different wealth aggregates in the two countries. Because indices are difficult to interpret if the distribution entails observations with negative wealth, we re-did the analysis for the total population with a bottom coding of the wealth component at zero. Finally, to shed light on the inequalities among households that actually hold positive wealth, we have also derived all indices excluding all households with zero or negative wealth.

Here we only comment on the results for the overall population without bottom coding. Pertaining to net worth, our results confirm the previous finding of markedly higher inequality in the US. The Gini index is 0.892 as opposed to 0.765 in Germany. These high numbers indicate that wealth is highly concentrated among a small number of households in both countries and that it is much more concentrated than income.

Adding social security pensions to net worth reduces inequality: the Gini index falls to 0.704 in the US and to 0.512 in Germany. When adding occupational and private pension wealth to net worth, we also find an inequality-reducing effect, albeit smaller. The Gini indices for augmented wealth reveal the overall effect of the inclusion of pension wealth –  the respective index for US households is 0.701 and 0.511 for German households. Putting the Results in a Broader Perspective

We would expect that the wider social safety net in Germany, relative to the US, implies that middle-class and poor Germans need to save less for job loss, sickness, and old age than corresponding US citizens. We would expect this primarily because of the higher social security pensions and their greater relevance in Germany than in the US. In addition, university education is free in Germany, which means that, unlike US citizens, Germans do not need to save for university tuition. In general, one would think that a wider social safety net would mean less need for precautionary savings. However, net worth is actually higher in Germany than in US up to the eighth decile. Our research also shows that cross-country comparisons of wealth are sensitive to the choice of the wealth aggregate. Augmented wealth may provide a more accurate picture of the welfare positions of households in different countries than net worth. Nevertheless, interpretations should be made with caution because of the restricted convertibility of social security pension wealth.