Yves here. Among other things, derivatives contracts all elect governing law, which is either US or English. So that alone makes “What happens to English law contracts entered into by parties in EU jurisdictions post Brexit?” a non-trivial issue.

Mind you, one of the appeals of Cyprus before its banking crisis was as a way for foreign investors seeking to invest in Russia, and even Russians wanting to invest in Russia but wanting access to a more mature and cleaner legal regime, was to go through Cyprus and enter into English law contracts, which in the case of disputes would be adjudicated in courts in Cyprus set up to handle English law cases. So this isn’t as unprecedented, as the post mentions.

By Uuriintuya Batsaikhan, an Affiliate Fellow at Bruegel who previously worked at UNDP in Mongolia and the German Institute for Economic Research in Berlin, and Dirk Schoenmaker, a Senior Fellow at Bruegel and a Professor of Banking and Finance at Rotterdam School of Management, Erasmus University Rotterdam. Originally published at Bruegel

English common law is the choice of law for financial contracts, even for parties in EU members with civil law systems. This creates a lucrative legal sector in the UK, but Brexit could make UK court decisions difficult to enforce in the EU. Parties will be able to continue using English common law after Brexit, but how will these contracts be enforced? Some continental courts are preparing to make judicial decisions on common law cases in the English language.

The UK is home to the world’s largest over-the-counter (OTC) foreign exchange interest rate derivatives market, with 36.9% compared to the US share of 19.5%. The UK is also the second-largest market for OTC interest rate derivatives, with 39% second to the US share of 41%.[1] Naturally, surrounding this large financial sector there is a vibrant legal sector where financial contracts are drawn up, enforced and disputes are resolved.

English common law is the preferred choice of law in commercial and financial contracts. This reinforces London’s position as a global center for international dispute resolution. With Brexit, the UK’s position in the European Union’s legal landscape will change. However, these changes will not necessarily challenge the supremacy of English common law.

At the moment UK court rulings are enforceable across the EU. The EU has a common judicial area governed by a regulation known as Recast Brussels I or the Brussels Regime. This regulation sets out a common set of rules governing which courts have jurisdiction in civil and commercial matters in the EU. Recast Brussels I creates a common judicial area, ensuring mutual recognition of court decisions. Thus a decision in one member state is enforceable throughout the EU.

The EU also has rules that let contractual parties choose the law under which they draw up contracts. In addition to Recast Brussels I, the EU is governed by a legal framework known as Rome I. This set of laws gives the parties the freedom to choose the law to govern their contractual obligations. In contrast to Recast Brussels I, participation in Rome I is not exclusively for EU members. That is, when the UK exits the EU, it will exit both the Recast Brussels I and Rome I regulations. But Rome I can be adopted back into UK domestic law by an Act of Parliament.[2]

This means that parties to a contract will have little difficulty choosing the law that will govern their contract – EU parties will still be able to draw up contracts under English common law if they wish to. However, if cases are settled in UK courts, it will no longer be certain that these decisions will be recognised and enforced in other EU countries. Access to a common judicial area could be limited, and negotiating a post-Brexit legal agreement on mutual recognition and enforcement of judgements between the UK and EU might prove to be a lengthy and uncertain process.

The parties could, in fact, choose to submit the case to (for example) a French Court, which falls inside Recast Brussels I. And if the UK reenacts Rome I, this will make it binding for the French court to admit the common law contract.[3] However, at the moment French courts would struggle to actually try the case because of a lack of common law expertise, which makes it highly unlikely that the parties would choose to do this. 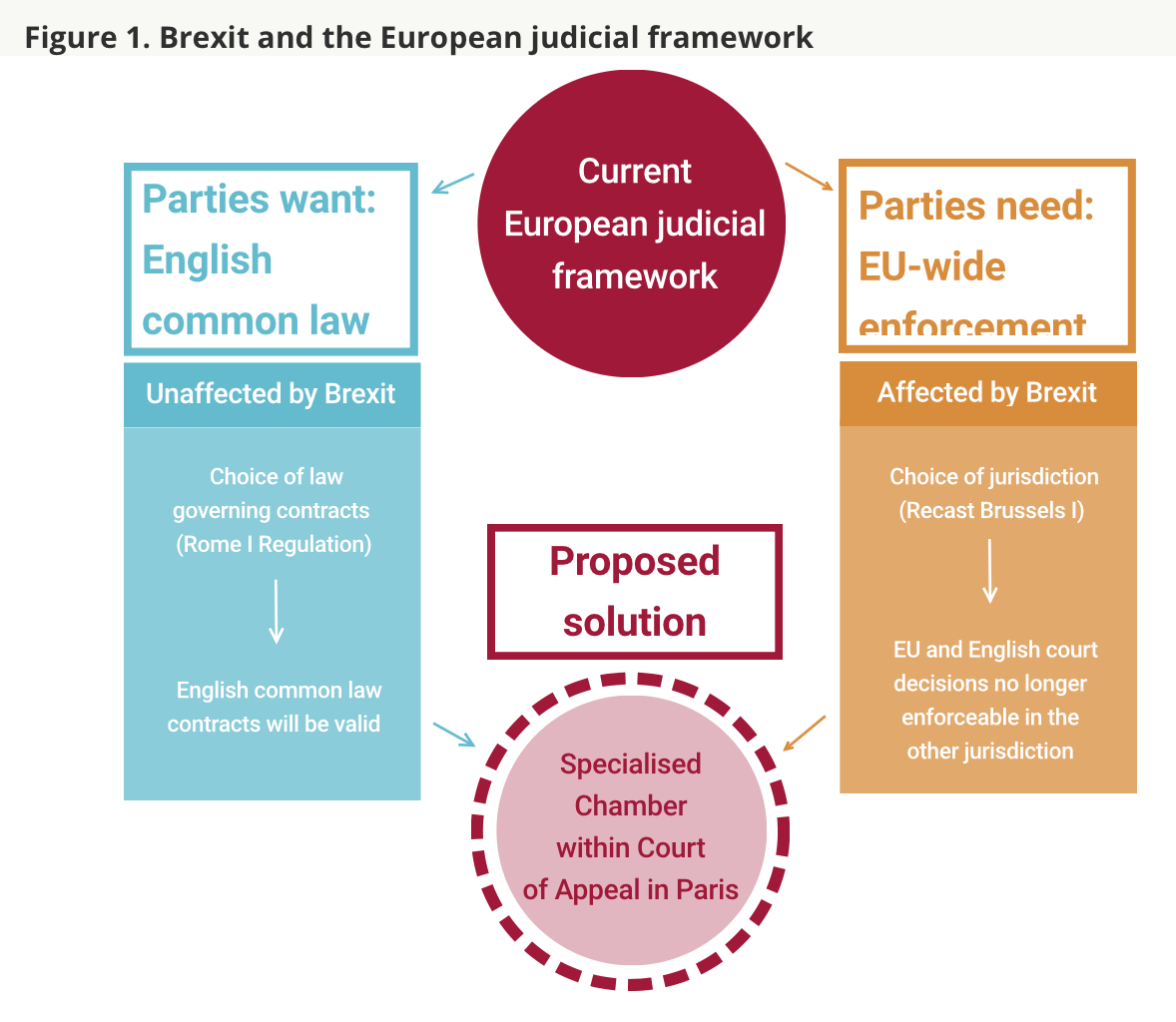 And there are already examples of the use of the English language in continental European courts. In France, Germany and the Netherlands the use of English is allowed in civil and commercial disputes, when all parties to the dispute consent to the use of English in conducting hearings, examining the evidence and appeal.

In the Netherlands, for instance, the Rotterdam District Courts allows use of English since January 2016 in cases involving maritime, transport law and international sales of goods. Use of English in the procedures entails that hearings are conducted in English, official records made in English, but the final decision is rendered in Dutch. But the use of English in a procedure does not change the application of Dutch procedural law. Going a step further, the Netherlands is setting up a specialised court, the Netherlands Commercial Court (NCC), to be opened in 2017/2018. The NCC will deal with large-scale international commercial disputes. The working language of the court will be English, but the court will apply Dutch law. The NCC aims to attract London and other international clientele by offering a cost-effective alternative to the City legal market.

In Germany, the District Courts of Aachen, Bonn and Cologne have started a pilot project where hearings can be conducted and documentary evidence can be presented in English without interpretation.[1] Use of English is allowed as long as both parties agree and the case involves civil cases exceeding 5000 euros and the case is of “international” nature. The pilot project gave way to a larger initiative that aims to establish chambers for international commercial matters at district court levels in Germany. The draft bill is currently being reviewed. If the bill is adopted, these specialised chambers will conduct hearings, file cases and even deliver judgments in international commercial cases in English. But they will still apply German law.

And in France, since 2010 the International Courtroom of the Paris Commercial Court has been accepting hearings and processing of case documents in English, German and Spanish, while the final decisions have to be delivered in French.

However, there is now a suggestion in France to go even further, using not just the English language but also English law. A recent report by the Legal High Committee for Financial markets of Paris put forward a proposal to create a specialised chamber within the Court of Appeal in Paris to deal with international trade and financial market disputes. This specialised chamber would deal with international business law litigation in English and be able to apply common law both in cases of first instance and appeal. In order to do so, the chamber would comprise of competent judges that are able to examine evidence, conduct hearings and deliberate in English, applying highly specialised technical elements pertaining to international commercial and financial contracts.

In this sense, the recent proposal suggesting a specialised chamber for international commercial dispute resolution under the Court of Appeal in Paris is a step forward into an uncharted territory, whereby English will be the working language in the French court while at the same time judges and the lawyers need to be able to apply common law within a French court system. The appeal procedure, accordingly, will also be administered through the French system.

If Paris wishes to be an international center for commercial dispute litigation, France could to a large extent accommodate common law and the use of English, which is the standard language for international commercial and financial contracts. Indeed, currently established arbitral tribunals work in exactly this way (English language and common law procedures). However, for this overall project to be feasible, France would need to make large investments in legal and human resources.

We should also remember that Ireland and Cyprus exercise common law in their arbitration and have access to the European common judicial area. As with the financial sector, the legal services sector is subject to competition to attract clients. In this sense Paris is one center entering the fray in this competition. It remains to be seen if and where legal services eventually move.

But one thing we can say. President Juncker may have spoken too soon about the falling importance of English in Europe. On the contrary, legal professionals might soon need to reach out for the Oxford dictionary of Law.

[3] Legal High Committee for Financial Markets of Paris (2017) “Report on the Implications of Brexit”, available at http://ibfi.banque-france.fr/fileadmin/user_upload/banque_de_france/HCJP/Rapport_05_A.pdf, last accessed June 1, 2017