Yves here. I must confess that I have not read the underlying papers. However, I have every reason to think this summary is accurate. And if so, I see two shortcomings with this analysis and I welcome reactions from readers, particularly those familiar with that debate (or alternatively, the economy of Miami)

One is it does not appear to allow at all for macro trends. The immigrants arrived in 1980, the depth of a very nasty recession. Thus the extra workers were picked up in the vigorous and sustained economic upswing after it ended. The second is whether “Miami” can be treated as a discrete economy. How many low-end jobs are there with local employers who would and could drop pay, versus ones like McDonalds and national hotel chains which wouldn’t?

By Silvia Merler, currently an Affiliate Fellow at Bruegel and previously an Economic Analyst in DG Economic and Financial Affairs of the European Commission. Originally published at Bruegel

What’s at stake: how does immigration affect the wages of local workers? One way to answer this question is by exploiting a natural experiment. The Mariel boatlift of 1980 constituted an ideal experiment – bringing a sudden and large increase of low-skilled workers in just one city – but results are still hotly debated.

In 1980, 125,000 mostly low-skill immigrants arrived in Miami from Mariel Bay, Cuba (“Mariel Boatlift”) in the space of a few months. In 1990, David Card investigated the effects of the boatlift on the Miami labour market. The Mariel immigrants increased Miami labour force by 7%, and the labour supply to less-skilled occupations and industries by even more, because most of the immigrants were unskilled. Nevertheless, Card concluded that the Mariel influx had virtually no effect on the wages or unemployment rates of less-skilled workers, even among Cubans who had immigrated earlier. Card suggested that the ability of Miami’s labour market to rapidly absorb the Mariel immigrants was owing to its adjustment to other previous large waves of immigrants. 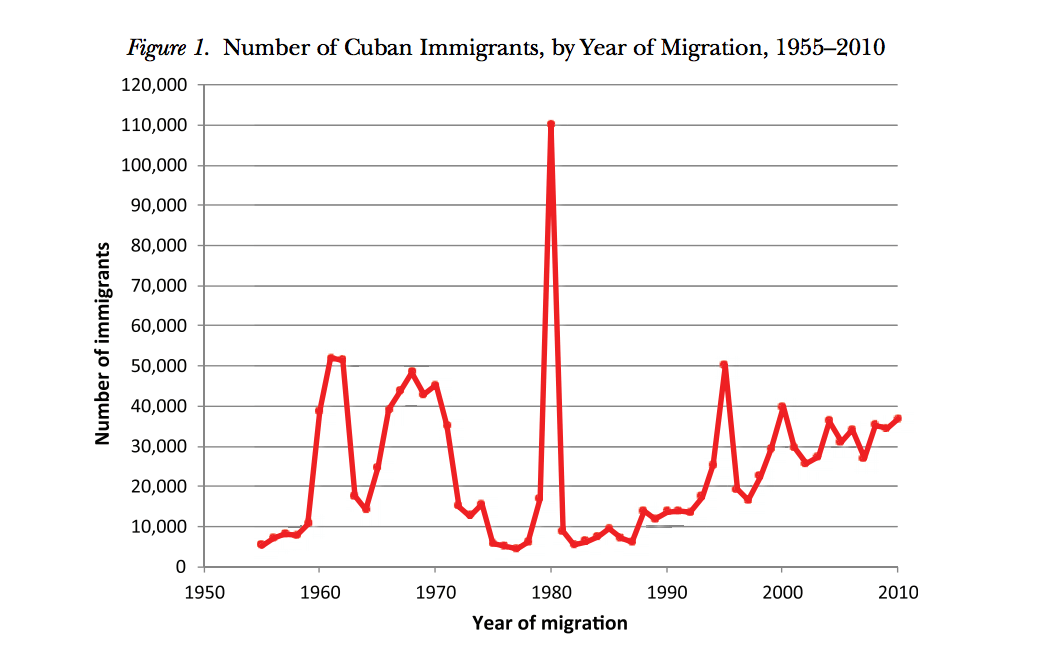 Ethan Lewis evaluates two explanations for Card’s result: (1), whether after the boatlift Miami increased its production of unskilled-intensive manufactured goods, allowing it to “export” the impact of the boatlift; and (2) whether Miami adapted to the boatlift by implementing new skill-complementary technologies more slowly than they otherwise would have. Lewis’ results suggest that wages are consistently found to be insensitive to local immigration shocks because markets adapt production technology to local factor supplies. Bodvarsson et al. argue that one reason immigration has no evident negative effect on the wages of locals is that immigrants as consumers contribute to the demand for their services. They model an economy where workers spend their wages on a locally produced good, then test it via a reexamination of the Mariel Boatlift and find strong evidence that the Boatlift augmented labour demand.

In 2015, George Borjas published the first version of a paper that was overturning completely the results of the previous literature on the Mariel supply shock. Borjas argued that any credible attempt to measure the wage impact must match the skills of the immigrants with those of the pre-existing workers. At least 60 percent of the Marielitos were high school dropouts, and specifically examining wages in this low-skill group suggests that Mariel did affect Miami’s wage structure. The wage of high school dropouts in Miami dropped dramatically, by 10 to 30 percent (depending on which control “placebo” groups is employed).

In 2015, Peri and Yasenov re-examined the wage and employment effect of the Mariel Boatlift, by using a synthetic control method to choose a control group for Miami so as to best match its labour market features in the eight years before the Boatlift. Analysing wages and unemployment rates they found no significant departure between Miami and its control from 1980 to 1983. 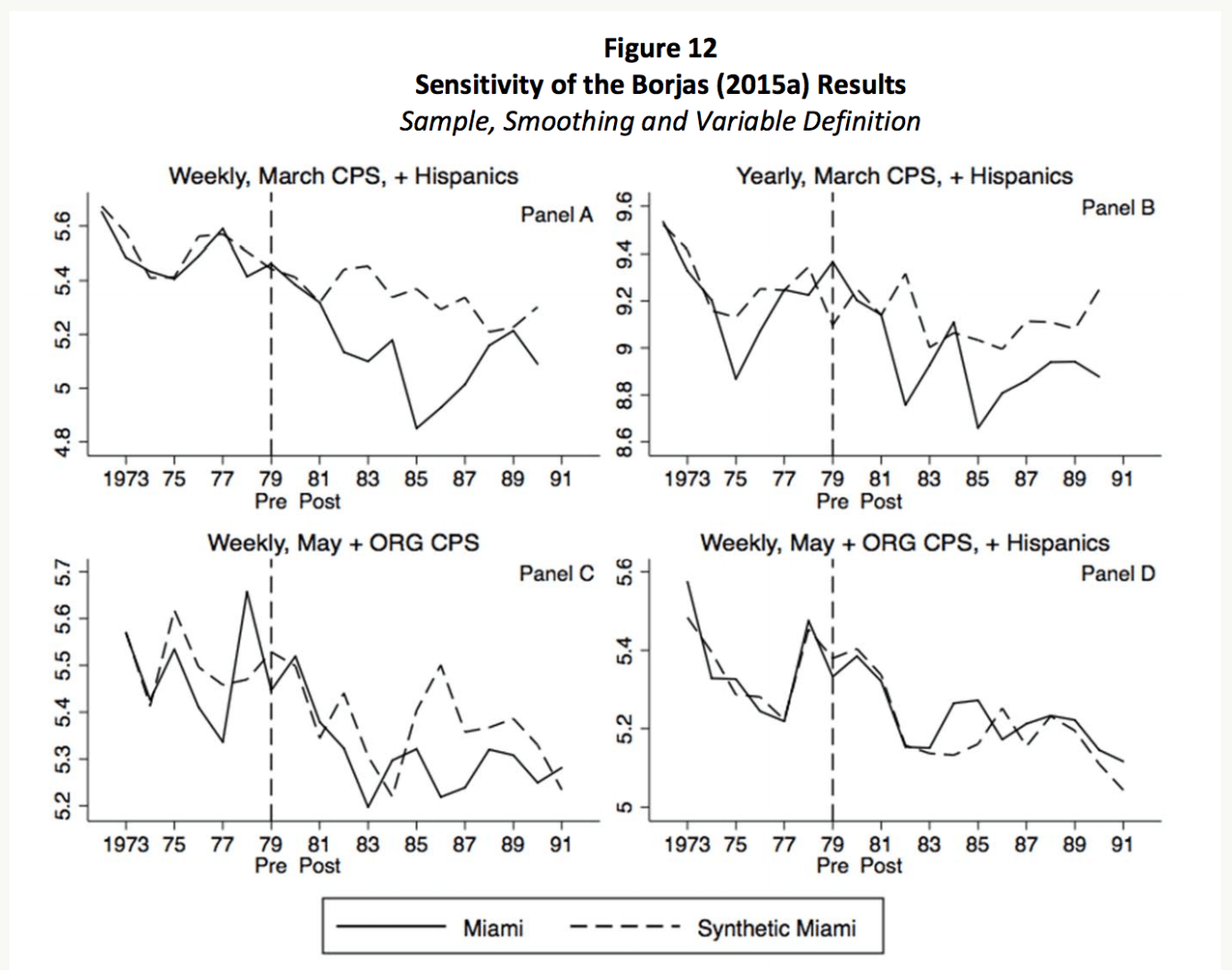 Peri and Yasenov also replicate Borjas’ results (figure above), and find that a large negative deviation of wages of high school dropouts in Miami arise only when using the March Current Population Survey data. Moreover, the deviation is significant only in a sub-sample obtained by eliminating women, non-Cuban Hispanics and selecting a short age range (25-59 years old) among high school dropouts. These very drastic choices leave the sample in Miami as small as 15-20 observations per year and measurement error in average Miami wages can be in the order of 20-30% for such sample. They argue that these restrictions are problematic because they eliminate groups of workers on which the effect of Mariel should have been particularly strong. They show that by adjusting Borjas’ sample to include these sub-groups of high school dropouts or looking at alternative outcomes, the post 1979 Miami-control differences vary widely (negative to zero to positive) if using March-CPS data.

Borjas answered with a second paper, intended to isolate the source of the conflicting results. He argued that the main reasons for divergence are that Peri and Yasenov calculate wage trends in a pooled sample of men and women, but ignore the contaminating effect of increasing female labour force participation. They also include non-Cuban Hispanics in the analysis, but ignore that at least a third of those Hispanics are foreign-born and arrived in the 1980s. Lastly, they include workers aged 16-18 in the sample. Because almost all of those “workers” are still enrolled in high school and lack a high school diploma, this very large population of high school students is systematically misclassified as high school dropouts. Borjas argues that this is a fundamental error in data construction, which contaminates the analysis and helps hide the true effect of the Mariel supply shock.

More recently, Clemens and Hunt argues that the discrepancy between Card’s, Borjas’s, and Peri and Yasenov’s analyses of the Mariel Boatlift can be explained by a sudden change in the race composition of the data they all use, i.e. the Current Population Survey (CPS). This survey happens every month; and two datasets taken from the CPS also report workers’ wages (the ‘March Supplement’ and the ‘Outgoing Rotation Group’, ORG). Clemens and Hunt point out that in 1980, the CPS survey methods was improved to cover more low-skill black men, which had been undercounted previously. Starting in the 1981 CPS, survey coverage of lower-skill black men shifted to include relatively more black men with less-than-high-school, and relatively fewer black men who completed high school (see figure below). 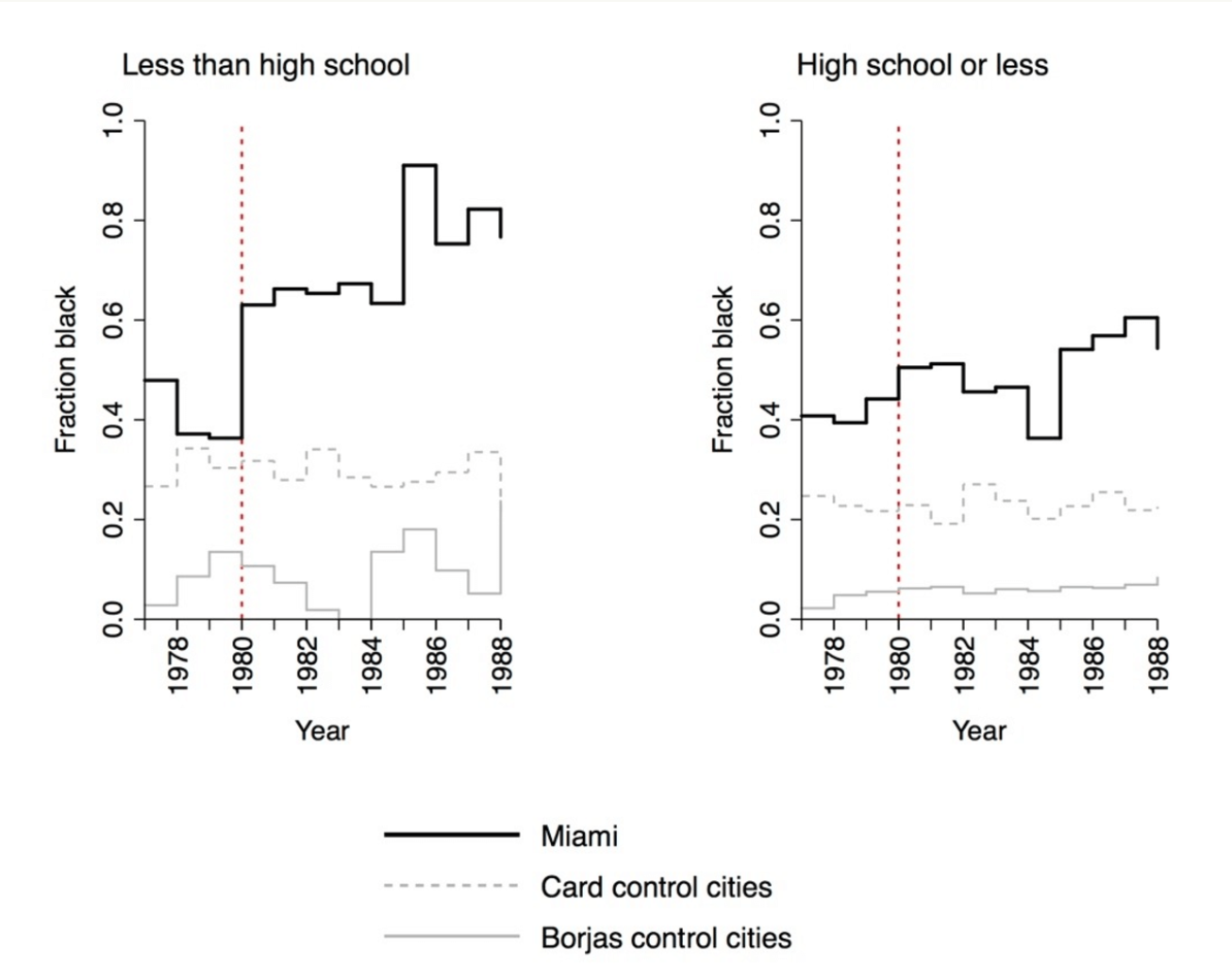 So in 1980, coinciding exactly with the Boatlift, the fraction of non-Hispanic blacks suddenly doubled in the subgroup of Miami workers with less-than-high-school analysed by Borjas (2017). No such increase occurs in the subgroup of natives with high-school-or-less analysed by Card (1990) in the same dataset, nor in the control cities favored by either Card or Borjas. Clemens and Hunt argue that due to the large wage divergence between black and non-black workers with less than high school, this sharp shift from majority non-black in 1979 to majority black in 1980 and almost entirely black by 1985 can account entirely for the magnitude of the effect measured by Borjas (2017) relative to the null result of Card (1990). The wage drop identified by Borjas would therefore be entirely spurious. Borjas methodological response and Clemens and Hunt methodological counter-response can be found here and here, respectively.