Regular readers are well aware of the opioid crisis (which is well summarized here). Short version: Between 2000 and 2014, deaths from opioid overdoses tripled. Question: Why?

The latest edition of The National Bureau of Economic Research’s (NBER) Bulletin on Aging and Health features a non-technical summary of a paper that grapples with the relationship between the decline in economic opportunities over that period and the increase in what have been called “deaths of despair.”

Alex Hollingsworth, Christopher J. Ruhm, and Kosali I. Simon wrote the paper, released earlier this year; here’s a link to the full version, Macroeconomic Conditions and Opioid Abuse 23192. (NBER 23192). From their abstract:

We examine how deaths and emergency department (ED) visits related to use of opioid analgesics (opioids) and other drugs vary with macroeconomic conditions. As the county unemployment rate increases by one percentage point, the opioid death rate per 100,000 rises by 0.19 (3.6%) and the opioid overdose ED visit rate per 100,000 increases by 0.95 (7.0%). Macroeconomic shocks also increase the overall drug death rate, but this increase is driven by rising opioid deaths. Our findings hold when performing a state-level analysis, rather than county-level; are primarily driven by adverse events among whites; and are stable across time periods.

The release of the NBER Bulletin’s summary has sparked renewed, wider coverage of the full paper’s findings on how the use of these drugs varies with macroeconomic conditions (see the following recent accounts in the International Business Times and Business Insider). Given that Trump declared the opioid crisis to be a national emergency earlier this month, it’s worth taking a closer look at the paper.

The paper analyzes data from the Multiple Cause of Death files compiled by the US Centers for Disease Control and Prevention (CDC) for the years from 1999 through 2014. Those files document all deaths that occurred in the United States during that period (and include state and county of residence details for the deceased). In addition, the researchers also examined drug-related emergency department (ED) visits at the county and state level, using information from the Healthcare Cost and Utilization Project of the Agency for Healthcare Research and Quality. Comprehensive national data on ED visits are not compiled, so the NBER researchers instead assessed data from 16 states for the years 2000 to 2014 (see pp. 6-13 of the paper for further discussion of data issues).

The researchers first use their data to examine trends in drug-related deaths and ED visits. The incidence of all drug-related deaths rose from 6 per 100,000 in 1999 to 16 per 100,000 in 2014. On average, half of these drug-related deaths involved opioids, 17 percent specifically involved heroin, and 38 percent involved only drugs other than opioids. Opioid-related ED visits are also on the rise, growing by about one-third between 2006 and 2014, though they represent just 14 percent of all drug-related ED visits. The probability that an opioid overdose ED visit results in an in-hospital death is 1.2 percent, far higher than the probability of death after an overdose of benzodiazepines, anti-depressants, or other common drugs.

The paper’s major contribution is the linkage it traces between unemployment rate increases  and opioid deaths and ED visits.  A one percentage point increase in the county unemployment rate:

The results for state level data were magnified compared to those for county level data. 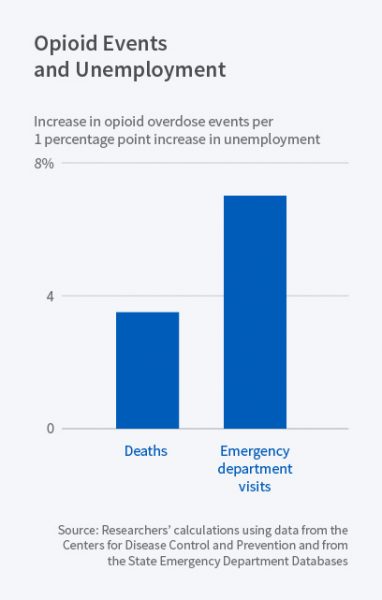 The NBER researchers found that the spike in drug-related deaths over the period studied has been far more pronounced for non-Hispanic whites than for either blacks or Hispanics (see the more extensive discussion at pp. 21-24 in the paper). This finding is consistent with the work of other researchers, such as the landmark 2015 study by Anne Case and Angus Deaton on the mortality and morbidity consequences of the increasing immiseration of the American white working class and their follow-up published in March of this year, each covered extensively by Naked Capitalism (see here, here, here, here, here and here, among other places on this site).

Please permit me to quote the last two paragraphs of the paper in full, as these discuss possible mechanisms for their finding that opioid-related deaths and ED visits increase during times of economic weakness:

There are numerous potential causal pathways linking macroeconomic developments to health behaviors and their consequences but we know little about the mechanisms for the effects observed here. For instance, lower incomes might lead to reduced purchases and use of legal or illicit drugs during periods of economic weakness … and explanations emphasizing reductions in time costs (e.g. having more time to engage in time-intensive health-improving behaviors like exercise or recovery treatment programs) would lead to better outcomes in economic downturns. Neither of these appear to be a dominant factor for opioids or other drugs that lead to ED visits or deaths, since both are predicted to increase as a result of negative macroeconomic shocks. On the other hand, our results could be consistent with a role for supply-side factors, such as the loss of health insurance or of public health funding for treatment or prevention during periods of economic weakness.

Notwithstanding the possible pathways just described, we suspect that the dominant factor linking macroeconomic conditions to adverse drug outcomes is that fatal and near fatal abuse of opioids often (and increasingly over time) reflects a physical manifestation of mental health problems that have long been known to rise during periods of economic decline. In this regard, we note that although opioids are prescribed to treat pain, there are strong linkages between pain, mental health problems and the use of analgesics. With the increased availability of prescription opioids (and reductions in heroin prices), it seems likely that consumption of these drugs rise when economic conditions worsen and that some of this increased use leads to adverse outcomes including emergency department visits or death. Developing a better understanding of the causal pathways for the results we observe is an important direction for future research (pp. 26-27; citations omitted).

I’ve nothing to add except: dare we hope to see some effective political and policy attention to this crisis?

So far, Trump’s declaration of a national emergency appears to be nothing more than mere empty rhetoric. And, as the cliche goes, talk is cheap. Nor am I alone in my pessimism; see, for example, this USA Today piece from a couple of days ago, The opioid emergency: Now what, Mr. President?— only one of many similar accounts I could have cited.

To be fair, Trump inherited this complex problem, the solution to which requires no less than something like this comprehensive approach discussed further in this cross-post from earlier this month, The Opioid Crisis: Treating Root Causes of Addiction. But I don’t think anything even remotely appropriate to the task will be attempted. So it goes.

Instead, in the absence of any official response other than mere lip service, too many preventable and unnecessary deaths from despair will only follow.