When tighter regulations were imposed on the banks after the Financial Crisis, the largest among them, the very ones that threatened to bring down the financial system, began squealing. Those voices are now being heard by Congress, which is considering deregulating the banks again. In particular, they claim that current capital requirements force banks to curtail their lending to businesses and consumers, and thus hurt the economy.

Nonsense! That’s in essence what FDIC Vice Chairman Thomas Hoenig told Senate Banking Committee Chairman Mike Crapo and the committee’s senior Democrat, Sherrod Brown, in a letter dated Tuesday, according to Reuters. The senators are trying to find a compromise on bank deregulation.

If banks wanted to increase lending, they could easily do so without lower capital requirements, Hoenig pointed out.

Rather than blowing their income on share-buybacks or paying it out in form of dividends, banks could retain more of their income, thus adding it to regulatory capital. Capital absorbs the losses from bad loans. Higher capital levels make a bank more resilient during the next crisis. If there isn’t enough capital, the bank collapses and gets bailed out. But banks that increase their capital levels through retained earnings are stronger and can lend more.

Alas, in the first quarter, the 10 largest bank holding companies in the US plowed over 100% of their earnings into share buybacks and dividends, he wrote. If they had retained more of their income, they could have boosted lending by $1 trillion. 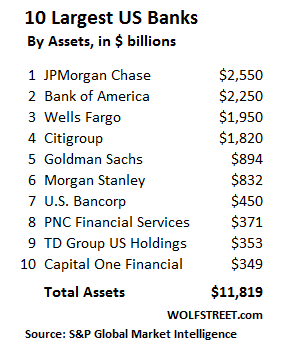 The CEO of the top bank on this list has been very vocal about plowing more of the bank’s income into share buybacks and dividends, while pushing regulators to lower capital requirements.

In his “Dear Fellow Shareholders” letter in April, Jamie Dimon wrote under the heading “Regulatory Reform,” among many other things:

“It is clear that the banks have too much capital.”

“And we think it’s clear that banks can use more of their capital to finance the economy without sacrificing safety and soundness. Had they been less afraid of potential CCAR stress losses, banks probably would have been more aggressive in making some small business loans, lower rated middle market loans and near-prime mortgages.

But the government was preventing them from doing it, he suggested.

This didn’t sit well with Hoenig apparently. He was president of the Kansas City Fed and member of the Fed’s policy-setting Federal Open Market Committee (FOMC) from 1991 to 2011 – through the Financial Crisis. Observers of the Fed remember him wistfully as a one of the rare “hawks” on inflation. And, in his function at the FDIC, he’s not shy about being a thorn in the side of the biggest banks – though he is outclassed by the power of the biggest bank regulator, the Fed, which has a much more accommodating view of bank regulation.

So Hoenig supplied some numbers in his letter.

The largest bank on his list, JPMorgan Chase, earned $26 billion over the four quarters. But it plowed $27.6 billion – or 106% of its income – into share-buybacks and dividends. If it had retained that income, it would have raised its capital by that amount, and it would have been enough to make an additional $250 billion of loans under current capital rules.

In total, the 10 largest banks combined, on an annualized basis, will plow 99% of their earnings into share-buybacks and dividends. Share-buybacks alone amount to $83 billion (not counting dividends). Under existing capital rules, if the banks were to retain this capital instead of buying their own shares with it, they could have increased commercial and consumer loans by $741 billion.

“I can only caution against relaxing current capital requirements and allowing the largest banks to increase their already highly leveraged positions,” Hoenig wrote. “The real economy has little to gain, and much to lose, by doing so.”

“While distributing all of today’s income to shareholders may be received well in the short run, it can undermine their future returns and weaken the growth outlook for the larger economy,” he wrote.

“I recognize that dividends are an important factor for investors and they should be rewarded for the risks they take. But it is also true that funding business growth, assuring future economic success, and promoting capitalism depend upon the retention of earnings,” he wrote.

What is it that makes me think that his reasoning and pleas will once again fall on deaf ears? Is it the fact that banks, including Goldman Sachs, have aggressively schmoozed with Congress and staffed essential parts of the administration? Something tells me that Hoenig will be once again shunted to a sidetrack and forgotten.