Syndicated loan issuance has grown dramatically over the last 25 years. Over the period, the syndicated loan business model has evolved, affecting the nature of the associated risks that arranging banks are exposed to. This column introduces the concept of ‘pipeline’ risk –the risk associated with marketing the loans during the syndication process. Pipeline risk forces arranging banks to hold much larger shares of very risky syndicated term loans, which results in reduced lending by the arran­­ging bank not only in the syndicated term loan market, but in others as well. 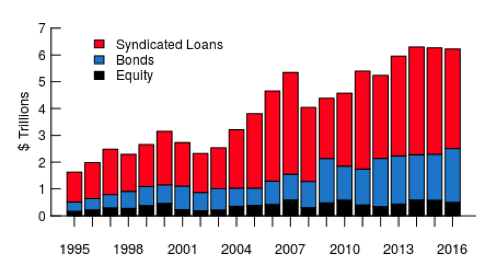 One consequence of these changes in the syndicated loan market is that the arranging bank nowadays aims to distribute as much of the loan as possible to these institutional investors, and keep very little or nothing on their banks. Currently the arranging banks retain, on average, only about 5% of a term loan.

The shift in the syndicated loan business model has also affected the nature of the associated risks that arrangers are now exposed to. While a large literature studies the consequences of loan syndication on the incentives to monitor borrowers (e.g. Sufi 2007), in a recent article we argue that while the sharp decrease in ultimate retention of syndicated loans has reduced the arranging banks’ exposure to traditional credit risk, the shift in the business model generates what we call pipeline risk (Bruche et al. 2017). This is the risk associated with marketing the loans during the syndication process. It stems from the need to underwrite loan syndications, and uncertainty about how much of the loan can actually be placed with institutional investors. 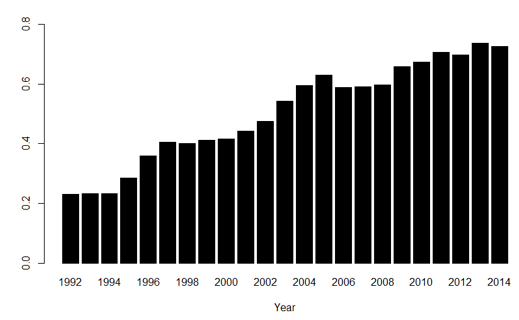 Two episodes in the last ten years illustrate that pipeline risk. In 2008, lacking demand from institutional investors for new syndicated loans, the banks arranging syndicated loans for leveraged buyout of Harrah’s Entertainment were forced to take $14 billion of very risky debt onto their balance sheets, at a time when banks already had substantial exposure of about $150 billion of unsyndicated, mostly LBO-related debt on their balance sheets.1 Similarly, in the fall of 2015, the loans financing the leveraged buyout of Veritas failed to attract sufficient investors, sending new shockwaves through the syndicated loan market. At the end of 2015, banks had about $40 billion of mostly LBO-related debt stuck in their syndication pipelines.2 Many arranging banks incurred sizable losses when they sold these loans later with large discounts.3 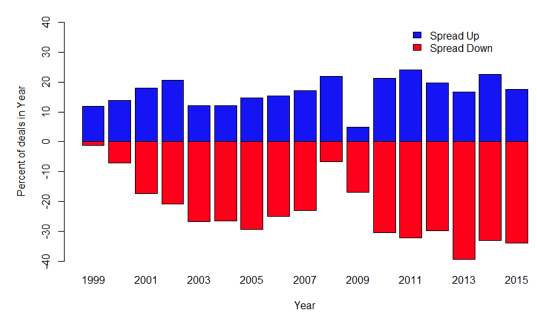 This second aspect generates risk about how much of the loan can be placed with investors. In practice, borrowers often have little flexibility over the total loan amount, and therefore will require guarantees from the arranger that the necessary funds will be raised (e.g. when a syndicated loan finances an LBO). Consequently, arrangers will often explicitly or implicitly underwrite loans and assume this.

Using data from S&P and the Federal Reserve, we show that arrangers retain larger shares in loans for which the spread was increased because investors indicated a low willingness to pay. If the loan spread increased by 100 basis points, the arrangers’ loan share is up to 3.3 percentage points larger. This is a large effect when compared to the average arranger loan share of 5.3%. In extreme cases, a loan is not syndicated at all, and banks have to provide bridge loans. In such bridge loans the arranging bank typically holds a much larger share.5

Pipeline risk is the risk that arranging banks have to hold much larger initial shares in very risky syndicated term loans that institutional investors find unattractive. Such ‘unfortunate’, larger-than-expected retention of a syndicated loan reduces the bank capital available for lending and causes banks to approach their internal risk or concentration limits. Consequently, we also find that unfortunate retention subsequently results in reduced lending of the affected arranging bank, not only in the syndicated term loan market but in other markets as well.

Hence, pipeline risk exposes arranging banks to having to hold much large shares of very risky syndicated term loans, which reduces bank capital available for lending and causes banks to approach their internal risk or concentration limits. Consequently, we also find that when banks have to hold much larger shares, they subsequently reducing lending not only in the syndicated term loan market but in other markets as well.

To be clear, from a risk-sharing perspective, the shift to the originate-to-distribute model may still be considered an improvement, as institutional investors rather than highly-levered, systemically important banks now hold most of the very risky term loans. However, this shift has also increased the vulnerability of those banks to pipeline risk. If too many banks engage in this type of risk-taking, and pipeline risk materialises for many of them at the same time (as happened in the financial crisis, for example, or towards the end of 2015), they could have a significantly reduced ability to engage in other lending, which may affect aggregate credit supply. For this reason, pipeline risk in the syndicated loan market bears watching, not just for micro-prudential reasons, but potentially also because of its macro-prudential implications.6

Authors’ note: The opinions expressed here are those of the authors and do not necessarily ‎reflect the view of the Board of Governors or members of the Federal Reserve System.