By Samuel A. Greene, Reader in Russian Politics and Director of the Russia Institute at King’s College London. Originally published at openDemocracy

Failed utopias lead to the death of idealism, and the likes of Putin and Trump are symbols of this process. As we watch Russia struggle with history, the US and UK cannot afford to pretend that this history doesn’t affect us too.

Revolutions – and their centenaries – are best dealt with in the first person. That, of course, creates a certain awkwardness for an academic, whose stock in trade is meant to be distance from the subject of study. But nothing forces a reckoning with one’s place in the order of things quite like a revolution, and that is true of academics even 100 years after the fact. Witness, for example, the never-ending debates about what a revolution even is.

Slipping into the first person – reckoning with my place in the order of things – allows me to admit another awkwardness that has arisen in this centenary season: That of an American, living in the UK, who is expected by virtue of his profession to pronounce on the “Russian” revolution. If any combination of subject, audience and personal heritage could make me feel like more of an imposter, I don’t know what it is.

To lessen that awkwardness, I have told myself – and a handful of audiences – that October 1917 was not just a Russian revolution. February had already done away with monarchical absolutism and the doorway to modernity – at least in the Euro-centric conception that dominated the age – was open. But Bolshevism, as the name would suggest, was meant to be about more than that: about more than Russia, perhaps about more than modernity.

The Bolsheviks looked at western modernity and found it lacking – in need of transformation. However misbegotten, and without regard to its eventual mutations, the communist ideal – what Yuri Slezkine has described as a millenarian, utopian vision for the fall of Babylon and the establishment of Justice – was to its adherents a universalist idea. It was a pathway to universal justice, to global justice, and it emerged onto the scene just as its brother, the Wilsonian democratic ideal, strode forth from America. Both of these universalist projects shared a progenitor, in the Scottish Enlightenment of Hume, Ferguson and Smith.

Each vision of Utopia presented an insurmountable challenge to the other.

Woodrow Wilson’s conceit was that paradise on Earth was already extant, in the New World and pockets of the Old, and, provided that the passions of humanity could be tamed, this paradise would eventually bathe the world in a gently rising tide of democracy. Lenin’s conceit was a hotter one, an understanding of the world so structurally unjust that only the fire of revolutionary uprising – the passions of humanity unleashed – could clear away the suffocating underbrush and allow for new growth. Russia and America have spent the last 100 years as mirrors held up to one another, revealing in excruciating detail both the loftiness of our ambitions and our frequent failures to live up to them. Indeed, our almost ubiquitous failures to live up to them. Russia and America – and perhaps the west more broadly – have constructed their contemporary selves with clear and abiding reference to one another: the American way was American because it was the rejection of the Soviet way, and vice versa. 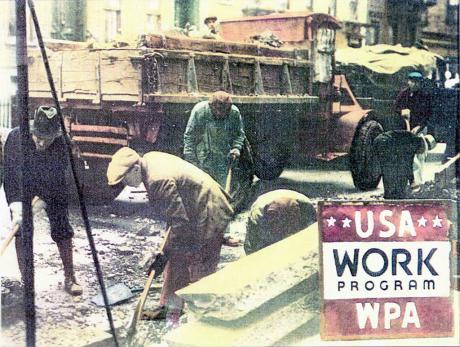 That reflexive, reflective modernity continues today. It outlasted the death of ideological fervour in both Moscow and Washington. It was the New Deal and the rise of the western welfare state – propelled by the example of state socialism and the fear of contagious ideology – that fueled Khrushchev’s Thaw. It was Yuri Gagarin who put Neil Armstrong on the moon. It was in the hall of mirrors that we call the Cold War that Martin Luther King Jr and Andrei Sakharov came into focus.

Utopia, of course, died long before the Soviet Union, but it is threatening to drown idealism in its wake. It is easy to forget, but in 1991 – in that moment of genuine euphoria – many Americans and Russians alike believed in a common future.

It took Americans longer than Russians to realize that this dream – that Russians would somehow become “like us” (whatever that might mean), the dream of the end of history – would not come true. Russians began to see in their American mirror something unattainable, but also something undesirable, and retreated from universalism into particularism, an insistence on a special path, a uniquely Russian civilization.

And Americans have come to see in the Russian mirror an image of everything we so desperately fear becoming – and that image is getting sharper by the day. We fear, in truth, not that Trump was installed by Putin, but that in electing Trump we ourselves have elected our own Putin – a leader who allows us to be our basest self and absolves us of guilt. If poet Fyodor Tyutchev (of “You cannot understand Russia with your mind…” fame) has replaced Lenin in the Russian discourse, Sarah Palin has replaced Wilson in the American.

As Russia Grapples With Its History, Are We Doing Any Better?

It has become commonplace to note how few conversations are happening in the Russian public space about 1917. The current masters of the Kremlin have hewn to a story of uninterrupted Russian power, from the princes of Kyiv, through Ivan the Terrible’s Muscovy and the Romanovs, into the Soviet era and beyond, with Putin the rightful heir of all of these disparate lineages. It is a neat trick, made possible only by the replacement of universalism with particularism. The only legitimating idea that connects the 19th, 20th and 21st-Century constructions of Russian power into a single arc is that of Russia itself.

Having noted that, it’s worth turning the same question back on ourselves: If Russia is struggling to come to grips with the transformation caused by 1917, are we doing any better? 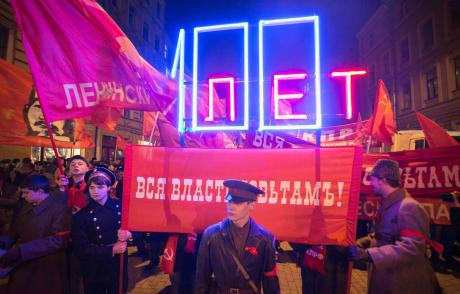 We call it the Russian revolution – or the Bolshevik revolution, which, if anything, makes it sound even more foreign – and we hold lectures and exhibitions. Excellent lectures and engrossing exhibitions. The Royal Academy. The Tate Modern. The British Library. Even King’s College London. John Reed is serialised on BBC Radio 4, with Russian workers speaking in cockney and Stalin sporting a spectacular Scottish brogue. We have dozens and dozens of opportunities to reflect – on Russia. And they’re fascinating. And we’re fascinated. But they miss the point.

How did 1917 change us? I don’t mean the fate of capitalism and socialism in the west, though that matters, too. I mean the west itself. To a very great extent, the west as we know it was born in 1917 in Petrograd. And 100 years later, it is still in Russia’s mirror that we see ourselves most clearly. If we care to look.

Revolutions generally begin with a mixture of concrete grievance and an abstract sense of justice – while the most powerful revolutions seem to involve an appeal to a transcendent, universal justice, to values that accrue to us all. Revolution in its purest sense thus might be thought of as the negation of identity and the rejection of particularism.

Revolutions are also about imagination – a simultaneous re-imagination of the future and the past, transforming our past into an abstraction of injustice to be rejected, and transforming the future into its opposite. In the process, we universalize our particularism – we ascribe to all of humanity our own grievances and our own imaginations.

The first thing we need to understand, then, was that 1917 threw all of us into a process of self-definition by reference to different imagined utopias. Competing and incompatible claims to universality – stalemated first by accidents of history and then by the design of Mutually Assured Destruction – decay into competitive claims of exceptional particularism, with the caveat that each particular exceptionalism is grounded in an exclusive universality.

Let me repeat that. Over the course of the 20th Century, Russia’s and America’s competing and incompatible claims to represent a universal vision decayed into competitive claims of exceptional particularism. And each of these particularistic formulations of exceptionalism was grounded in a mutually exclusive vision of universality.

An Impossible Future, and a Past That Never Existed

Because we “won” the Cold War – because our system of political and economic governance survived and the Soviet Union’s did not – we might forget that we have walked the same path and arrived at the same destination.

The Soviet Union began by attempting to build a future that could not exist: universal prosperity could not be planned. As the idea of that shining future faded, Russia sought shelter in a past that never existed, a myth of pan-Slavic virtue, harmony and plenty. The argument that justifies Crimea, that justifies Donbas, is not an argument – it is the absence of an argument. It is the argument that arguments do not matter. That ideas do not matter. That what matters, is where we are, and right now, we are here.

But the America of the NRA and Black Lives Matter – or the Britain of UKIP and Grenfell Tower – are not the lands we told the Soviets we were building. They are not the lands we told ourselves we were building. And we, too, retreat from future into past. We elect governments on the basis that government is the problem, not the solution. We cleave to leaders who base their politics in the absence of policy. And we, too, fight wars because we can.

For those of us who study politics, these past few years have also been a time of retreat into particularism – into methodological exceptionalism, if you will. Rational choice. Realism. Constructivism. As a discipline, whatever your preferences, your foundations have been shaken. The politicians tell us our nations have had enough of experts, and we are duly, maybe ritually indignant – but in our quieter moments, we, too, wonder about our usefulness. The evisceration of idealism that enables both Putin and Trump afflicts us, too.

Maybe the time for quiet moments has passed. Maybe we can raise the volume a bit. Maybe we can turn the tide back towards the universal, towards understanding something about the other in ourselves and the self in our others. Wouldn’t that be revolutionary?

This text is adapted from a keynote address delivered at the British International Studies Association Conference on “1917 in 2017: Russia’s Unfinished Revolution” on 17 November 2017, in London.