Yves here. This article describes how women’s work is subjected to more scrutiny than men, which the author argues lowers their productivity. To add insult to injury, in many fields, women also have to produce more than men to be admitted to leadership roles. For instance, a MIT study found that female scholars in the sciences had to publish 2.5 times as many peer reviewed papers as men to get tenure.

By Erin Hengel, Lecturer in Economics, University of Liverpool, Originally published at VoxEU

When evaluated by narrowly defined quality measures, women are often found to outperform men. This column uses an analysis of almost 10,000 articles in top economics journals to show that one area where this is the case is clarity of writing. Tougher editorial standards and/or biased referee assignment may force women to write better, and may also reduce their productivity.

Yet there is another side to female productivity that is often ignored – when evaluated by narrowly defined quality measures, women often outperform. For example, houses listed by female real estate agents sell for higher prices (Salter et al. 2012, Seagraves and Gallimore 2013); female lawyers make fewer ethical violations (Hatamyar and Simmons 2004); and patients treated by female physicians are less likely to die or be readmitted to hospital (Tsugawa et al. 2017).

In a recent study, I show that female economists surpass men on another dimension: writing clarity (Hengel 2017). Using five readability measures, I find that female-authored articles published in top economics journals are better written than equivalent papers by men.

Why? Because they have to be. In a model of an author’s decision-making process, I show that tougher editorial standards and/or biased referee assignment are uniquely consistent with women’s observed pattern of choices. I then document evidence that higher standards affect behaviour and lower productivity.

Is It Really Discrimination?

To determine readability, I rely on a well-known relationship: simple vocabulary and short sentences are easier to understand and straightforward to quantify. Using the five most widely used, studied, and reliable formulas to exploit this, I analyse 9,123 article abstracts published in the American Economic Review, Econometrica, Journal of Political Economy and Quarterly Journal of Economics.2

First, female-authored abstracts are 1–6% better written than similar papers by men. The difference cannot be explained by year, journal, editor, topic, institution, English language ability, or with various proxies for article quality and author productivity. This means the readability gap probably wasn’t (i) a response to specific policies in earlier eras; (ii) caused by women writing on topics that are easier to explain; (iii) generated by factors correlated with gender but really related to knowledge, intelligence and creativity; or (iv) due to a lopsided concentration of female native English speakers.

Second, the gap widens precisely while papers are being reviewed. To show this, I analyse readability before and after review by comparing published articles to earlier drafts released in the National Bureau of Economic Research (NBER) Technical and Working Paper Series.3

Figure 1 Readability gap formed before and during peer review (%) 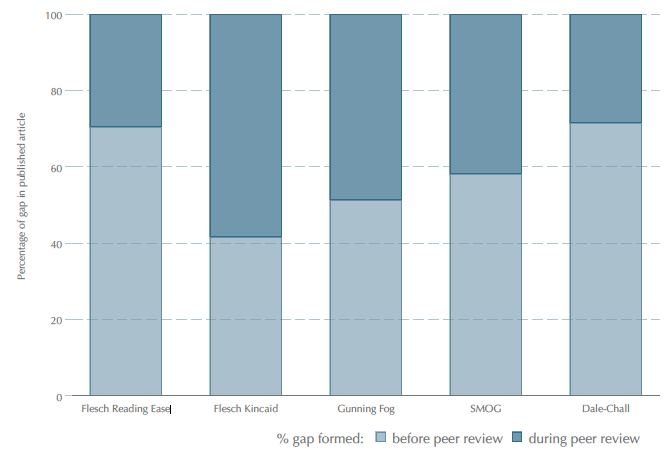 Why does peer review cause women to write more clearly? There are two possible explanations. Either women voluntarily write better papers – for example, because they’re more sensitive to referee criticism or overestimate the importance of writing well – or better written papers are women’s response to higher standards imposed by referees and/or editors.

Both explanations imply women spend too much time rewriting old papers and not enough time writing new papers. However, my evidence suggests the latter is primarily to blame. To show this, I model an author’s decision-making process over time. The model establishes three sufficient conditions to test for higher standards in peer review.

The intuition behind these conditions is simple. Assuming preferences do not change over time, authors improve readability today relative to yesterday only if they believe better writing leads to higher acceptance rates. Of course, oversensitivity and/or poor information may distort their beliefs – and affect readability – but the impact declines with experience. Holding acceptance rates constant, this implies that a widening readability gap between equivalent authors is caused by discrimination – i.e. asymmetric editorial standards and/or biased referee assignment beyond women’s control.

On average, conditions 1 and 2 hold. Experienced female economists write better than equivalent male economists, and women improve their writing over time (but men don’t) (Figure 2). Between authors’ first and third published articles, the readability gap increases by up to 12%. Although my data do not identify probability of acceptance, conclusions from extensive studies elsewhere suggest no gender difference (e.g. Ceci et al. 2014). 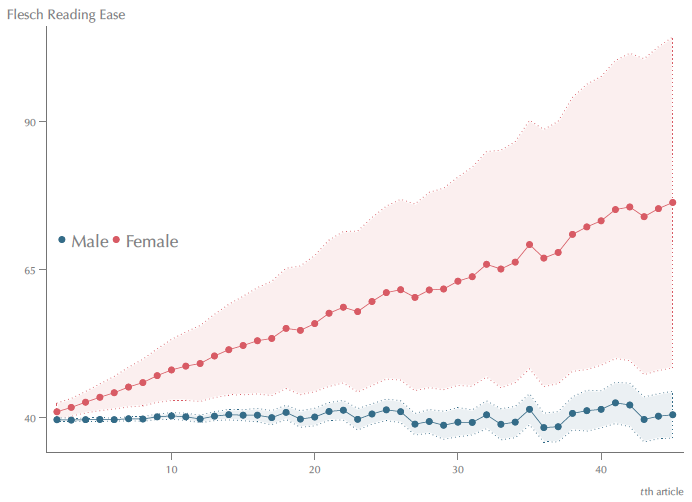 Technically, however, each condition must hold for the same author in two different situations: before and after gaining experience and when compared to an equivalent, experienced author of the opposite gender. To account for this, I match prolific female authors to similarly productive male authors on characteristics that predict the topic, novelty, and quality of research. 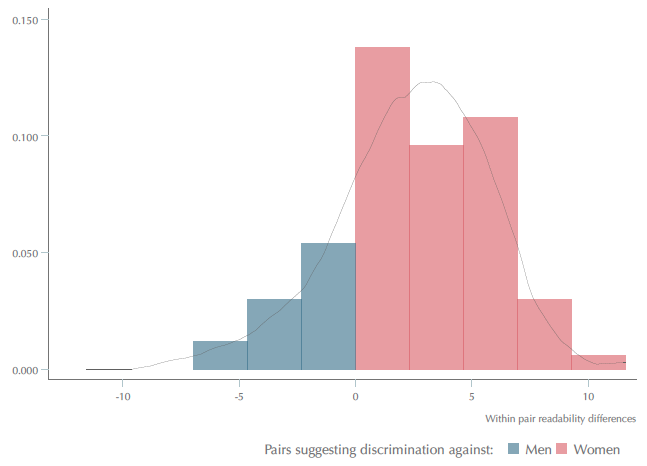 Within-pair differences from Figure 3 can also be used to generate unconditional (conservative) estimates of the effect of higher standards on authors’ readability (for details, see Hengel 2017). On average, they suggest that discrimination causes senior female economists to write (at least) 9% more clearly than they otherwise would.4

Figure 4 displays review time distribution by author sex. Women’s times (pink) are disproportionately clustered in Figure 4’s right tail – articles by female authors are six times more likely to experience delays above the 75th percentile than they are to enjoy speedy revisions below the 25th. 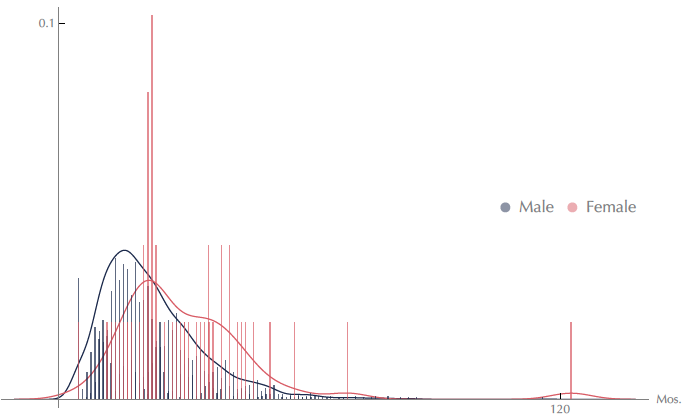 Using a more precise estimation strategy, I find that male-authored papers take (on average) 18.5 months to complete all revisions; equivalent papers by women need half a year longer. These estimates are based on a model by Ellison (2002: 963). In addition to the statistically significant variables he incorporates – author productivity, article length, number of co-authors, order in an issue, citation count, and field dummies – I also control for motherhood and childbirth.5

How Do Women React to Higher Standards? 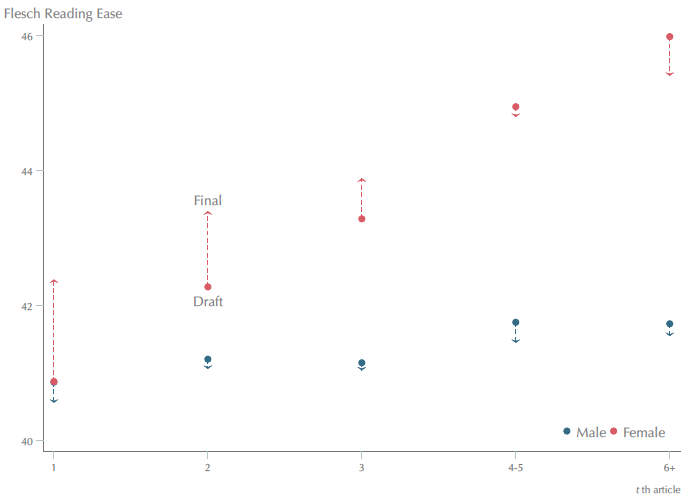 Note: Flesch Reading Ease marginal mean scores for authors’ first, second, third, 4th–5th and sixth and up publications in the data. Solid circles denote estimated readability of NBER working papers; arrow tips show the estimated readability in the published versions of the same papers. Pink represents women co-authoring only with other women; blue are men co-authoring only with other men.

Men, however, do not. Draft and final readability choices remain relatively stable over the course of their careers.

Are men just better informed about referees’ expectations? Yes and no. Male and female draft readability scores for first-time publications are exactly the same. This suggests that men and women start out with identical beliefs. But those beliefs reflect standards that apply only to men. Women are then mistaken by thinking they apply to them, too.

Figure 5 suggests that women respond to biased treatment in ways that not only obscure the line between personal preferences and external constraints, but can paint a rosier picture than even preferences justify. This raises a couple of concerns about identifying discrimination from narrow viewpoints. For example, if we only concentrate attention on a cross-section of papers written by senior economists, we might conclude that women simply prefer writing more clearly. Alternatively, if we limit our focus to the gap formed inside peer review, we might decide it declines with experience.

But neither conclusion is supported when the data are analysed from a broader perspective. A smaller gap in peer review is completely offset by a wider gap before peer review. Senior female economists did not enjoy writing so well when they were junior economists.

My evidence also emphasises that discrimination impacts more than just obvious outcomes. It corrupts productivity, too. Work that is evaluated more critically at any point in the production process will be systematically better (holding prices fixed) or systematically cheaper (holding quality fixed). This reduces women’s wages (for example, if judges require better writing in female-authored briefs, female attorneys must charge lower fees and/or under-report hours to compete with men) and distorts measurement of female productivity (billable hours and client revenue decline; female lawyers appear less productive than they truly are).

Unfortunately, there is no easy way to eliminate implicit bias. But least intrusive – and arguably most effective – is simple awareness and constant supervision. Monitoring referee reports is difficult but it isn’t impossible, especially if peer review were open. Several science and medical journals not only reveal referees’ identities, they also post reports online. Quality does not decline (it may actually increase); referees still referee (even those who initially refuse) (van Rooyen et al. 1999). And given what’s at stake, is spending an extra 25–50 minutes reviewing a paper really all that bad (van Rooyen et al. 2010)?