We Are Most Likely Alone in the Universe Reason (PlutoniumKun)

A tragedy in the making as the US confronts China Asia Times. Kevin W: “Goldman being Goldman, he goes off the reservation a bit towards the end but it still interesting reading.”

Confirmed: Northern Ireland has no back-up plan for a hard border Politics.co.uk (guurst)

Immigration overhaul on life support in the House The Hill

Trump Calls For Deportations Without Hearings Or Judges Jonathan Turley

Democrats once again prove they’re out of touch on immigration New York Post (Li). From a conservative perspective, but has some polling data on policy options.

Unionsstreit beschert AfD Rekordhoch N-TV. Merkel polls better than the head of the CSU, Horst Seehofer, even among CSU voters, despite his poking a stick in Merkel’s eye over migration.

Donald Trump hits out at Harley-Davidson decision to move some production out of US Abc.net.au (Kevin W)

Personal attacks on Trump staffers won’t end well for America New York Post (Li). What these Dem top 10% instigators don’t seem to understand is what is good for the goose is good for the gander. If it becomes OK to mob a Trump official who fronts for policies you don’t like, it becomes OK to mob TV hosts, state and local officials, and even rich funders (assuming they can be identified) that stand for things the right or worse, those “deplorables” don’t like. They are greasing the skids of revolutionary violence and assume this is gonna work out just fine for them.

This Is a Bully’s Language Medium (PlutoniumKun). The left is so fucked:

This is someone celebrating — celebrating — that they helped get an event cancelled, and they’re openly admitting that they did it for NO OTHER REASON than that they had a personal vendetta against one of the organizers. I’ve met plenty of bullies before, and this is a bully’s language.

People are ‘ghosting’ at work, and it’s driving companies crazy LinkedIn. Alex V: “Interesting….. probably should be read with a massive grain of salt. Now if only companies would stop ghosting the population on wage increases. ”

This picture came off the trail cam I have hanging at the edge of my backyard, taken July 23 2017 at 7AM. The camera makes a barely audible click when it fires, and this instantly attracted the cat’s attention. I am in southern Fairfield County, Connecticut, in an over-developed suburban town about 12 miles from the coastline. However, our backyard abuts a large wooded area of wetland (also known as swamp), enough of which we own to have prevented development over the years. Lots of deer, turkeys, possums, raccoons, skunks, chipmunks, woodchucks and foxes (a family of four was cleaning up under the bird feeder last week). Also, flying squirrels at night (especially if we forget to bring in the bird feeder) — once every few years in the fireplace, but we have a small havahart trap. We have the occasional coyote, and I have frequently seen (and heard) screech owls and barred owls. but I have yet to see a bear. Also, nice selection of birds, with hawks that get a mourning dove every so often. From what I have read, bobcats are keen on self-preservation (article said that they are excellent climbers, but stay out of trees to avoid injury, also that they tend to be solitary to avoid conflicts and fights) so I think I am lucky to have this picture. It was the only one in several years of trail cam use. If he is still out there, he makes himself very scarce, and probably sees me long before I see him. 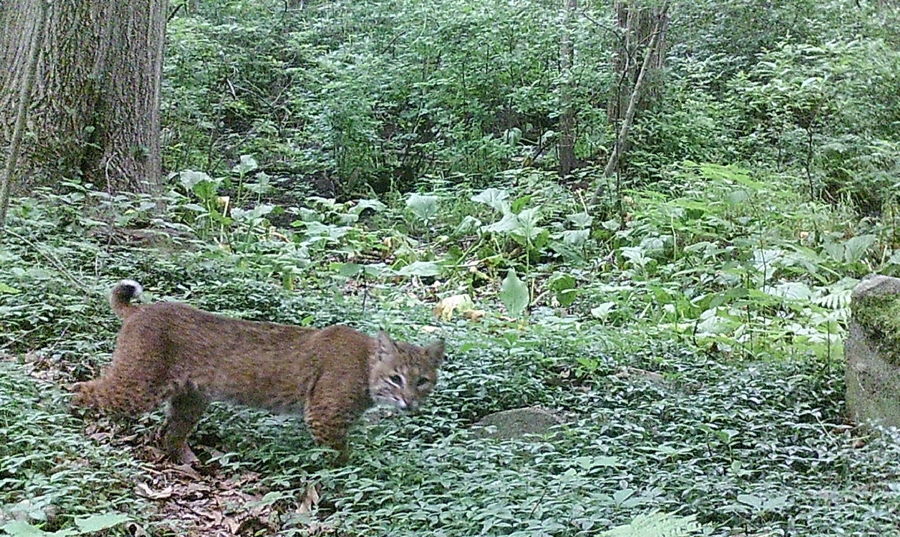