Here is latest iteration of my “Table 1” for the 2018 primaries. The structure is the same as the last iteration (‘Worksheet for the 2018 Midterms (How Big Does “The Wave” Have to Be?)’. As usual, the horserace information is the latest available from the Inside Elections tipsheet (last updated June 14[1]). All the districts even remotely in play are listed. There are 82, and surely, if the Democrats are to win the 23 seats they need to win to take control of the House, those 23 are in that 82.

I have added two columns: “PVI” and “HRC +/-.” PVI (data from Cook Political Report), or “Partisan Voter Index,” is “a measurement tool that scores each congressional district based on how strongly it leans toward one political party.” Concretely:

(Here is Howie Klein using PVI to evaluate past DCCC chair Steve Israel’s performance.) HRC +/- is 2008 Democrat candidate Hillary Rodman Clinton’s margin of victory or defeat (data compiled by Daily Kos). For many districts, I have added the “winner” to status, and added challengers and bios who “withdrew” (needed to make sense of California, where some withdrawals were forced). A few were “disqualified,” so I added that category to the Hoser. I have also added the category “Safe-D,” for those horse races that the Cook Political Report removed from its ratings after they moved from “Likely-D.” I also added a new backer, Great Slate.

Herewith the table, which gives us important results, different and more nuanced than in the past.

First, let’s look at those safe Democrat districts. Here they are:

These are, as it were, pieces off the board. This is consistent with a slow erosion of Republican strength, as from “Likely-R” to “Tilt-R,” as seen in the previous two worksheets.

Now let’s look at something much more interesting, and take our new PVI and HRC columns out for a spin. The first query returns districts — not all, remember, but the “battleground districts” we are tracking — where Clinton’s margin was between zero and ten:

Figure 2: Republican Districts Likely to be Targeted (by HRC) 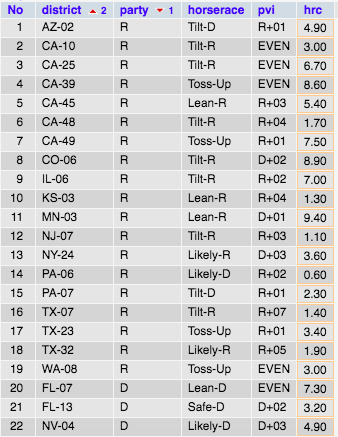 You will immediately recall that the Democrats need to flip 23 seats, and when you look at the figure, you will see that of the 22 districts listed, 19 are Republican. It makes sense, pragmatically, for Democrats to try to flip Republicans seats that Clinton won, as we have been told. For example:

I continue to insist that these Democrats will have a lot of trouble getting this done, because the dominant factions in the party[2] are so awful in every way (Shattered; Chasing Hillary; Listen, Liberal!). The Republicans won’t be passive, either. But you can see why the professionals are less skeptical of Democrat victory than I am. (For me, the outcome of the election is either gridlock — assuming that Pelosi sticks to her promise not to impeach Trump, which would tear the country apart — or Götterdämmerung for today’s liberal Democrat establishment. So I’m sitting in the catbird seat: All the outcomes are good!)

Figure 3: Republican Districts Likely to be Targeted (by District) 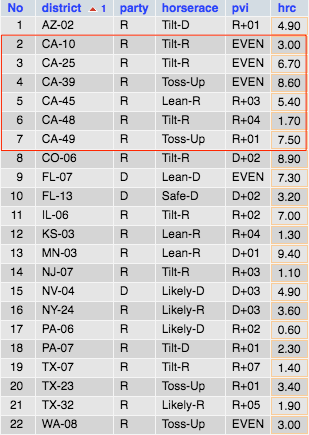 California leaps to the eye, and would, even if I hadn’t outlined these districts in red and highlighted them in yellow! Let’s put those districts on a map. (This the best I can do; all the others I could find are in some JavaScript-heavy [family blogging] interactive format I can’t just add mark-up to.) 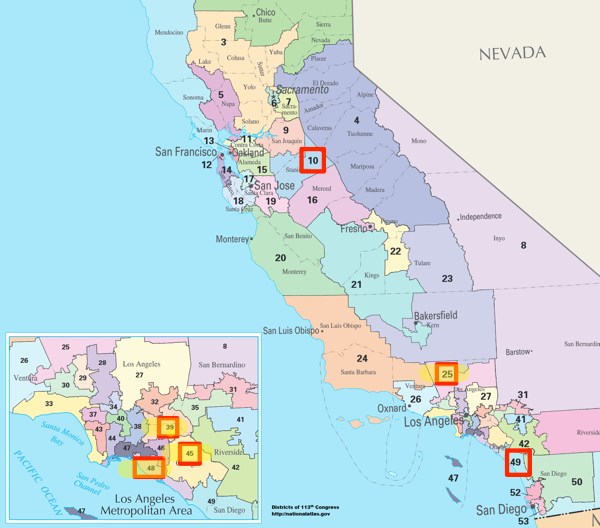 Time presses, and I haven’t added a demographic column to Table I (and at some point I’m going to run out of horizontal space). So I will speculate, though I think with reason (see below), that the Latinx composition of the urban districts mapped is high, and that the prospect of Latinx votes in these key, flippable districts accounts for the Democrat Party’s drastic and sudden shift from “Russia! Russia! Russia!” to what Nicholas Nassim Taleb labels pedophrasty. (That’s not to say that immigration policy is not a serious issue — it is — but to say that the liberal Democrats approach to it shows little evidence of good faith.)[3]

Now let’s add an additional overlay to the map in Figure 4: California ports. 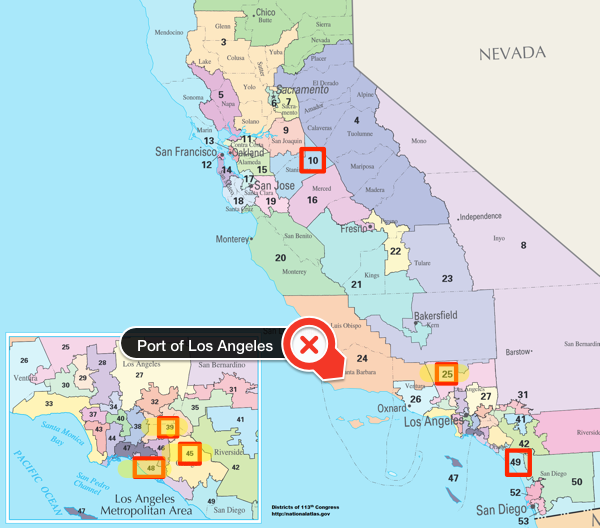 A new picture emerges, doesn’t it? Here are some statistics for the Ports of Los Angeles and Long Beach complex:

The port’s container volume was 9.3 million twenty-foot equivalent units (TEU) in calendar year 2017, a 5.5% increase over 2016’s record-breaking year of 8.8 million TEU. It’s the most cargo moved annually by a Western Hemisphere port. The port is the busiest port in the United States by container volume, the 19th-busiest container port in the world, and the 10th-busiest worldwide when combined with the neighboring Port of Long Beach. The port is also the number-one freight gateway in the United States when ranked by the value of shipments passing through it.

In terms of market share, the Ports of Los Angeles and Long Beach combined are twice as large as the next ranked port, New York. (In other words, these ports are the most important choke point for the entire supply chain of the United States, incoming and outgoing.)

Now let’s ask ourselves a question that Democrats do not ask, at least in public: What is the nature of the working class that makes these ports run? By a happy coincidence, I have been working through Kim Moody’s excellent On New Terrain (recommended at NC by Steven Parfitt here), and Moody provides the answer to this question. From Chapter 5, “Logistics: Capital’s Supply Chain Gang,”[4] pages 59 et seq.:

Even as capital in the United States was consolidating in industry after industry, the ties that bind the production of goods and services together, whether locally or across space, were tightening in new and important ways…. One of the most important changes in the reorganization of supply chains is their geography, the concentration of workers in key “nodes” or “clusters” [see Figure 5] along with their technological drivers and linkages…

Because the turnover times of sunk capital that characterize logistics clusters and their internal infrastructure are long, and profits sloe in coming, there is enormous pressure on both owners and users of this infrastructure to seek out relatively cheap labor compared to that employed in the movable aspects of logistics: trucks, trains, planes, ships, and the like.

All the metropolitan sites of major logistic clusters are also homes to large “ghettos” and “barrios” housing large numbers of unemployed and underemployed working-class people…. They are the quintessential reserve army of labor….

This is the unspoken locational “metric” that makes the Los Angeles, Chicago, and the New York-New Jersey metropolitan areas, the country’s three largest metropolitan statistical areas with their millions of low income Black and Latino people and relatively high poverty and unemployent rates, the biggest logistics clusters of all.

So you can see what the Democrat Party is doing here. As we show in Figure 5, three of the districts in California that Democrats must flip — must flip, if one takes their protestations in good faith, to remove a psychotic President from office, and prevent Fascism — are centered on the Ports of Los Angeles and Long Beach; they are logistics clusters, hence have (at least for the Latinx portions of the reserve army of labor) exactly the same demographics that Democrats are — as seems obvious to me — trying to manipulate with their “Babies! Babies! Babies!” moral panic. Yet will they attempt, as a party, to address the, er, “economic anxiety” of this portion of the working class? Will they support a $15-dollar-an-hour wage? (That would buy some babies better formula!) How about card checkMR SUBLIMINAL lol no so that these “ghetto and barrio” workers can form unions? (That might get some babies health insurance through collective bargaining!) Call me crazy, but how about #MedicareForAll? (That should help some babies grow up with two healthy parents!) Will they even combine their serial moral panics with an economics appeal? Of course not.

On the one hand, liberal Democrats would kill Baby Hitler in his or her cradle; on the other, they’d rather die as a party — as they may well do — than make a class-based appeal in districts that cry out for it![5] Every logistics cluster is a ginormous [family blogging] cage with hundreds of thousands of inmates, including babies, and liberal Democrats seem firmly determined to keep the working class confined behind the chain link fences and bars. Well played, all.

[1] That is, before the migrant moral panic began, and so not including its effects, if any. My guess, and we’ll see in two weeks whether I’m right, is that the effect will be “not very much,” assuming that the memory of Obama’s own deportations, for-profit detention centers, and family separations remains vivid in the minds of those targeted, and that liberal Democrat apparatchik posturing, preening, and historical erasure fail to gain traction except among those already sold. In a close election, of course, “not very much” could translate to “just enough.”

[2] Remember that the purpose of this series is not following the horse race — although who can look away from it? — but to come to an understanding of the Democrat party as an institution. Frankly, I don’t feel that I’m very far along. The closest I have come, so far, is that the Democrats are a gang that control the ballot line instead of a street corner, but that analogy does not provide an account of entities like Brock’s million-dollar trolls, tame “journalists,” or Democrat-aligned factions in the intelligence community. It also doesn’t provide an account of changes in the Democrat base, as described by Thomas Frank.

[3] Speaking against this account would be that the current episode concerns Central American migrants, and I neither know the exact Latinx composition of these districts nor wish to assume that all Latinx voters have identical values and interests.

[4] Here I pause to pat myself on the back for making shipping and supply chain issues central-to-mission for Water Cooler.

[5] Bernie should hold a town hall or two in some logistics centers.