Net neutrality is dead, and ISPs (internet service providers) now have unprecedented power to block or throttle internet traffic or even prioritize traffic in exchange for payment.

And you would expect the average ISP to jump at the opportunity to squeeze some extra cash from providers in this cutthroat environment.

But some say it isn’t going to happen.

Major ISPs are now saying they won’t do any of those things.

AT&T, Verizon and Comcast have all said on their websites they have no plans to do any blocking, throttling or paid prioritization. Another telecom giant– Charter Communications– has only promised in its network management disclosure not to block or throttle but has suspiciously remained tight-lipped about its position on paid prioritization.

The new rules of the game allow paid prioritization in which ISPs provide internet fast lanes to service providers by optimizing data transfer rates in exchange for payment. They are, however, required to disclose any such privileges publicly. The disclosures are supposed to be made either on the ISPs’ websites or on the FCC website.

AT&T, Verizon, Comcast and Charter are the four biggest home internet providers in the U.S.

It’s not like the latest announcements by these ISPs have exactly come as a major surprise to observers. Net neutrality supporters have always speculated that ISPs would be on their best behavior during the early stages after repealing the old law to prevent a backlash that might encourage lawmakers to reconsider their position.

Critics of net neutrality argue that bandwidth-hogging companies like Netflix should be made to pay for the heavy burdens they place on broadband networks.

Its proponents, on the other hand, argue that creating fast lanes for specific sites would necessarily lead to slowing down other potentially competing sites. That would, of course, amount to unfair or even unethical practices that regulatory bodies would frown upon.

Further, favoring some providers over others would essentially be making them gatekeepers and give them too much power to control free market activities. Smaller edge providers have argued that prioritizing the big players would lead them to dominating the competition and stifling innovation.

Although net neutrality has finally been banished, it’s far from being a fully resolved issue. There’s a fair chance that a weaker form of net neutrality might soon appear, though chances of a full restoration of the old FCC rules as per the demands of Democrats look remote.

Not every state is willing to leave its citizens at the mercy of ISPs.

As responses from state and local governments have been varied, the National Regulatory Research Institute (NRRI), a research branch of the regulatory non-profit NARUC, has decided to start tracking legislative action by each state. NRRI has developed maps that track states that have passed executive orders, laws and various resolutions in response to the repeal. 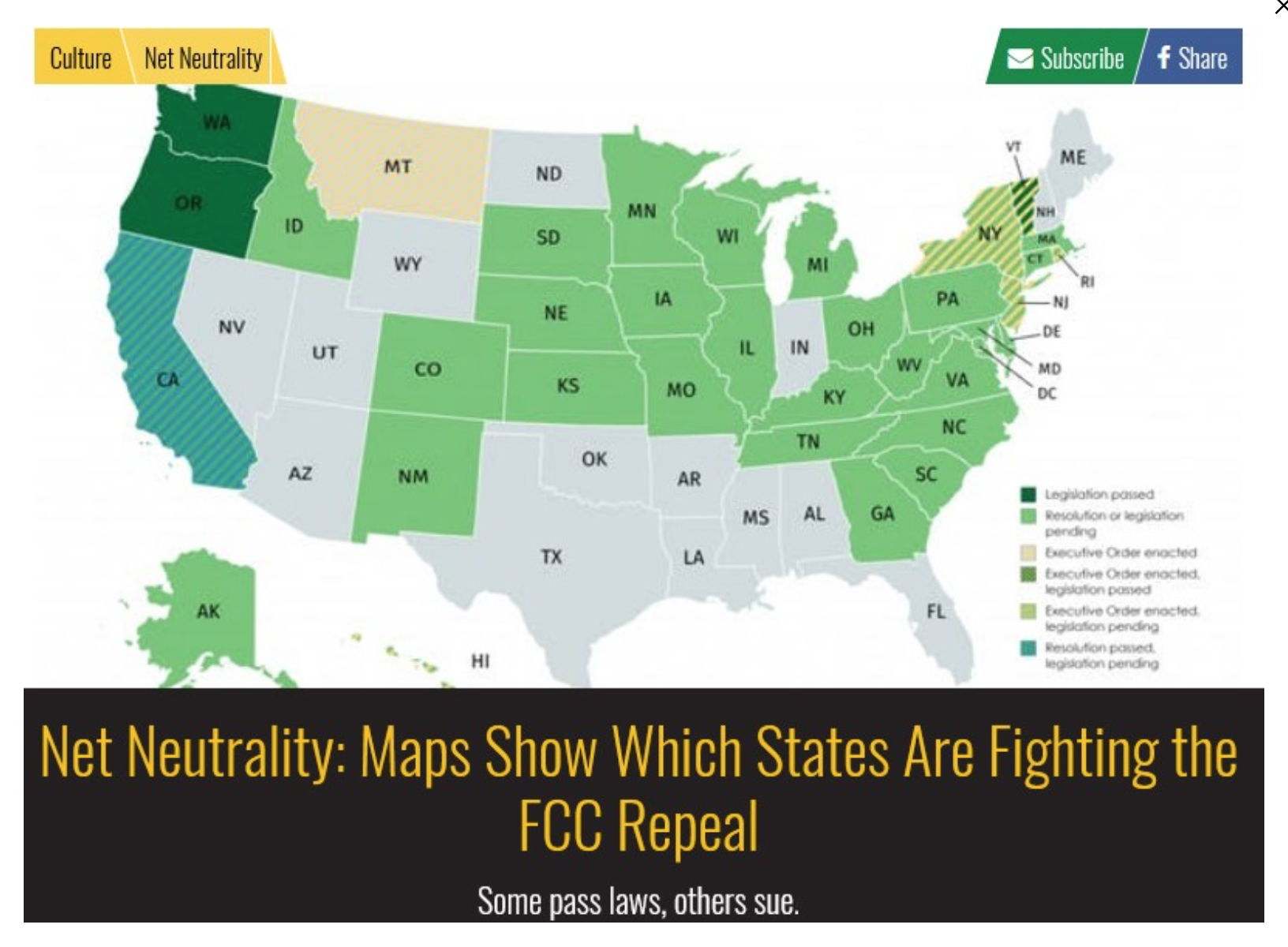 The latest update by NRRI shows a rather intriguing picture. A total of 36 states have proposed or passed resolutions since the passing of the new rules, with New York, New Jersey, Hawaii, Montana, Rhode Island and Vermont issuing executive orders that require ISPs to contract with state governments to ensure they continue abiding by the old net neutrality requirements.

A good 22 states are already suing the FCC  in the courts to overturn the Restoring Internet Freedom Order. NRRI  also says mayors of 122 cities have pledged to require ISPs to play by the old net neutrality rules if they hope to continue doing business with their municipalities.

Looks like the war against net neutrality is far from being won.