Yves here. I must confess to not knowing that participation in social activist groups was a prescription ofr depression. First, there is a very strong base of evidence that shows that regular exercise is very effective in alleviating mild to moderate depression, so I am curious to see remedies with less solid research backing being recommended widely instead. Since most people are extroverts, it’s not hard to see the intuitive appeal of getting them out of the house and out with people as a mood-lifter. And for those whose depression was triggered or intensified by a personal setback, getting out and seeing that others are worse off may restore a sense of proportion. But still….

By John Picton, a lecturer at the University of Liverpool where he specialises in non-profits, donation and the law, particularly as they relate to politics. Follow him on Twiter at @JohnPicton5. Originally published at openDemocracy

Apolitical volunteering is ill-equipped to address the structural causes of depression. 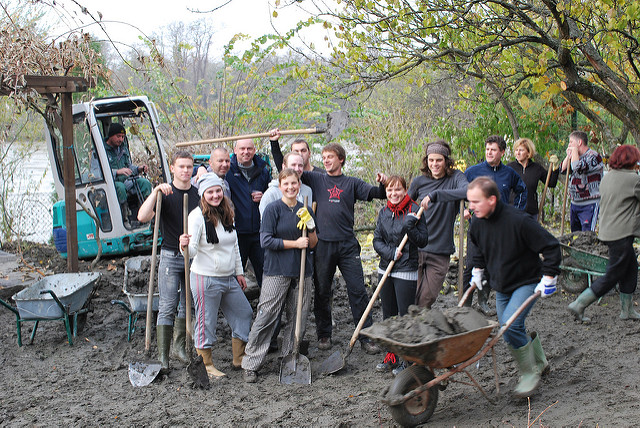 ‘Social prescribing,’ where patients with depression join in community activities as a part of their treatment, is moving from the fringe of medical practice to the mainstream. Matt Hancock, the new British Minister for Health and Social Care, has pledged £4.5m to promote it, but we should stop to think before we take this medicine: linking patients to their communities is a positive step, but a better move would be for people to get involved in social activism.

The Minister probably has one eye on his budget, since social prescribing is thought to stop patients coming back to doctor’s surgeries—so saving the state money in the National Health Service (NHS). But this scheme, which normally involves referring the patient to a link worker who then recommends different types of community activity for them, is about more than balancing the books: in fact the NHS is administering a large dose of social theory.

Almost 20 years ago, the American Political Scientist Robert Putnam published Bowling Alone. Since then there has been a groundswell of interest in its central concept of ‘social capital’—the idea that community bonds such as those developed in bowling leagues in the USA make both individuals and societies happier and healthier.

Putnam is a nuanced writer, but the core focus of Bowling Aloneis on community participation not social activism. He wants to unify us not cause political fights, and hopes to develop a country of association-joiners: religious service attenders, sports club players, park gardeners, members of knitting circles and school governors. In one interview he analogises this to a honeycomb, a social system of welcoming and interlocking groups, each empowered as a part of a greater civic whole.

Charismatic, and with the enigmatic appearance of a nineteenth century preacher, Putnam has become an academic celebrity. His ideas on social capital have been met with great enthusiasm by policy makers on both sides of the Atlantic. One British policy group working right at the heart of the Cabinet Office has called him the most influential political scientist alive. Before his promotion, Hancock held the British Government’s brief for civil society, and the influence of Bowling Alonecan be clearly felt in his new policy on social prescribing. Linking individual depression to a lack of community activity takes a leaf straight out of Putnam’s book.

At core the idea is simple: integrating patients into their communities is thought to develop self-esteem and social support, providing a holistic treatment instead of just prescribing drugs. In turn, the community will also be improved. It would take a hard heart to reject this idea completely; friends and community really are an important element in our lives whether or not we have depression.

One report by the charity Age Concern describes the case of a woman who, having lost her husband to suicide, found solace in volunteering as a befriender and in theatre outings. Another, trapped in a rural community without access to transport, was encouraged to organise a local party. Social prescribing is also deployed in support of community gardening, sports and arts and crafts. Although there is little hard evidence to back this up, strengthening the community links of patients seems likely to have a positive impact on their health.

But there is something missing from this picture. Depression is intimately connected with economic structures. Even when we are well paid we might still have a difficult boss. Target-driven work culture is bad for us, leading to intense and demanding jobs in environments over which we have little control. When we are also short of money our situation gets even worse; unemployment impacts negatively on health, and the effect is more pronounced in countries with weak social security systems. Discrimination impairs our mental well-being.

In their new book The Inner Level, epidemiologists Kate Pickett and Richard Wilkinson make a data-based case, not only that unequal societies are worse to live in but also that inequality erodes trust and leads to anxiety, causing an arms race in competitive consumption. This animus is good for no one; disparities in wealth connect with the prevalence of mental illness, and so depression is linked to a deep economic ordering which volunteering is ill-equipped to address. No bowling league will work for a fairer society and no gardening club can keep your boss off your back.

It’s not that social capital theory is wrong, just incomplete: community networks are an important, perhaps vital, element of our lives. But even combined with medication they are not a truly holistic solution to depression. By emphasising community over political action, social prescribing side-steps the economics of mental illness: a focus on social capital shifts the frame away from the social effects of capitalism. It is economic society that needs a visit to the doctor.

Of course we should not abandon hope in voluntary action. In its more radical guise as social activism it focuses attention on the economic context of depression. In this vein, a charity called Time to Change encourages its members to meet with their bosses, requesting a pledge to tackle mental health stigma in the workplace. Another charity, Mind, works to improve welfare benefits for mental health sufferers, encouraging its members to lobby Parliament. In contrast to much community work, these campaigns put politics at the centre.

In the period since Putnam wrote Bowling Alone, it has become obvious that society cannot realistically be theorised as a civic whole of interlocking groups: there is no ‘honeycomb.’ News reports reflect a world of irreconcilable conflict, from Brexit in the UK to the polarising impact of President Trump in the USA. Yet the fact that we can no longer ignore our divisions might lead us to mount a back-to-front argument againstpoliticising volunteering in this way: in a context of strife, non-political community work could be said to provide a neutral space which opens up a civic domain in which we can come together and leave politics at the door; a place where we might give it all a rest and just concentrate on something fun like bowling.

There is some mileage in this view. It’s true that not everyone wants to talk politics with their neighbours, but all political silence has a cost. After two years of field work, the American Sociologist Nina Eliasoph concluded that volunteers often work to keep their conversations neutral, taking care not to sour the mood at meetings. Yet to disengage on social questions is to accept a type of disempowerment, a self-removal from the scene. For Eliasoph, social activists have something valuable that community workers do not—a willingness to recognise complexity, challenge authority, and relate deeply with each other. To confront political issues is only to recognise social reality.

While a focus on the economics of depression might push some right-leaning volunteers out of the meeting room, single-issue activism can still be reasonably inclusive. In contrast to party membership, which might require the broad embrace of a cluster of divisive policies, social activism hones in on a cause. A single issue can provide a point around which diverse people might coalesce, even when they agree on little else. At best, activists enjoy the community advantages of a cell in Putnam’s honeycomb. They can be tightly bound together as friends, but they also have a critical awareness of cracks in the overall social and political structure.

Social activism can mean leafletting, door knocking and collecting signatures, but it is not necessary to get cold outside in order to change the world. Those that prefer the warm might turn to art. William Morris, the Victorian socialist and designer thought that joy in creativity was nature’s compensation for toil in labour. Depressed in office work, we might still take pleasure in music, dance, film, photography, crafts or ‘craftivism.’ It is even possible to politicise a knitting circle if activists put slogans onto clothes, quilts and samplers, voicing the economics of depression in cross-stitch. Or they might write and blog together, explaining the world in order to change it. What matters is that we do all our work with an awareness of society, politics and economics, combined with a willingness to change all three.

The British Minister for Health should be given credit for being innovative, but it is unrealistic to expect him embrace or encourage social activism. No Minister could prescribe social change on the National Health Service; part of the attraction of Putnam’s theory is precisely its political safety. Policy-makers are responsible for steadying the ship of state not rocking it.

When Brooks Newmark, a former British Minister for Civil Society said recently that charities should “stick to their knitting,” he meant to imply that they should keep out of political and economic issues. But that is the voice of the status quo. In fact, politics is precisely what volunteers should be doing—not least with their needlework.