Sounding the Alarm on Global Warming

If the Paris climate agreement of December 2015—the so-called COP21 —provided cause for optimism that, after years of fruitless diplomatic squabbling, coordinated global action to avoid dangerous climate change and ensure manageable warming of less than 2° Celsius, would finally happen, recent publications by climate scientists are loudly sounding the alarm bells. Specifically, Earth systems scientists (Steffen et al. 2018) and the Intergovernmental Panel on Climate Change (IPCC 2018) warn that even if global emissions are drastically reduced in line with the 66% below 2°C goal of COP21, a series of self-reinforcing bio-geophysical feedbacks and tipping cascades—from melting sea ice to deforestation—could still lock the planet into a cycle of continued warming and a pathway to final destination: “Hothouse Earth.”

Allowing warming to reach 2°C would create risks that any reasonable person—if not, perhaps, Donald Trump—would regard as deeply dangerous. To avoid those risks and keep warming below 1.5°C, humanity will have to reduce emissions of greenhouse gases (GHGs) to net zero by 2050. The early optimism about the Paris agreement is giving way to widespread pessimism that COP21 will not be working soon enough. Climate scientists and Earth systems scientists attempt to counter the growing pessimism by showing that limiting the global mean temperature increase to 1.5°C is neither a geophysical impossibility, nor a technical fantasy. The engineering solutions to bring about deep de-carbonization—including quick fixes and negative-emissions technologies—are available and are beginning to work.

The real problem is that available solutions go against the economic logic and the corresponding value system that have dominated the world economy for the last half decade—a logic aimed at scaling back (environmental) regulations, pampering the oligopolies of big fossil-fuel corporations, powering companies and the automotive industry, giving free rein to financial markets and prioritizing short-run shareholder returns (Speth 2008; Klein 2014; Storm 2017). Hence, as Steffen et al. (2018) write, the biggest barrier to averting going down the path to “Hothouse Earth” is the present dominant socioeconomic system, based as it is on high-carbon economic growth and exploitative resource use. We will only be able to phase out greenhouse gas emissions before mid-century if we shift our societies and economies to a “wartime footing,” suggests Will Steffen, one of the authors of the “Hothouse Earth” paper in an interview with Kate Aronoff (Aronoff 2018).

The alarmist tone of the “Hothouse Earth” analyses stands in contrast to more upbeat reports that there has been a delinking between economic growth and carbon emissions in recent times, at least in the world’s richest countries. The view that decoupling is already happening in real time is a popular position in global and national policy discourses on COP21. To illustrate, in a widely read 2017 Science article titled “The Irreversible Momentum of Clean Energy,”, former U.S. President Barack Obama, argues that the U.S. economy could continue growing without increasing CO2 emissions thanks to the rollout of renewable energy technologies. Drawing on evidence from the report of his Council of Economic Advisers (2017), Obama claims that during the course of his presidency the American economy grew by more than 10% despite a 9.5% fall in CO2emissions from the energy sector. “[T]his ’decoupling’ of energy sector emissions and economic growth,” writes Obama, “should put to rest the argument that combating climate change requires accepting lower growth or a lower standard of living.” Obama is not the only optimist in town; others have highlighted similar trends:

In our new INET Working Paper, we attempt to go beyond the “Yes, We Can” optimism concerning decoupling, offering what we hope is a more realistic evaluation of the nexus between economic growth and carbon emissions. We do this in two ways. We first assess the viability of a long-run decoupling of global economic growth and carbon emissions using the easily-understood Kaya identity[i]. We then present a systematic econometric analysis of the (historical) relationship between economic growth and carbon dioxide emissions, using the Carbon-Kuznets-Curve (CKC) framework. We run panel data regressions using OECD Inter-Country Input-Output (ICIO) CO2 emissions data for 61 countries during 1995-2011, and to check the robustness of our findings, we construct and use three other panel samples sourced from alternative databases (Eora; Exio; and WIOD).

Can the Global Economy Grow as Global Carbon Emissions Fall?

We first assess the scope for (global) growth from 2014-2050, which is consistent with carbon emission reductions of the 66% below 2°C scenario of COP2. Using the Kaya identity, the growth of global carbon emissions can be decomposed into global population growth, per capita income growth, the growth of carbon intensity of energy supply, and the growth of energy intensity of GDP. Table 1 presents the results of a decomposition of global CO2 emissions for the period 1971-2015 and our projection for the period 2014-2050. Note that we focus on CO2emissions from the energy system, which represent 70% of global GHG emissions in 2010. As Table 1 shows, historically, global CO2 emissions increased by 1.93% per year during 1971-2015. Growth in population (at 1.53% per year) and in per capita real GDP (at 1.91% per year) exerted upward pressure on CO2 emissions, which was only partially offset by downward pressure from higher energy efficiency (energy intensity declined by 1.35% per annum) and lower carbon intensity (which declined by 0.15% per year). These downward trends in energy and carbon intensity are insufficient to delink economic growth and carbon emissions—and they are nowhere close to what is needed to achieve the longer-term Paris pledges or the recommendation of IPCC (2018).

Sources: See Schröder and Storm (2018). Notes: Average annual growth rate are compound average annual growth rates. Calculations are based on the IEA (2017) and IEA 66% 2°C scenario projections. The projected changes for the period 2014-2050 are consistent with the IEA 66% 2°C scenario projections. For derivation, see Schröder and Storm (2018)

Table 1 also presents our growth prognosis for the period 2014-2050. We assume that global CO2 emissions in 2050 have to be reduced by 85% relative to their 1990 level, or by 5.13% per year. World population growth equals 0.79% per year, based on United Nations projections. The very ambitious (i.e. historically unprecedented) projected decreases in energy and carbon intensity are taken from OECD (2017, Table 2.18); these projections are in line with IEA-OECD 66% below 2°C scenarios. Based on these optimistic assumptions, we find that climate-constrained growth of global per capita income cannot exceed a measly 0.45% per year during the next three decades. Hence, if we want to stabilize the climate, future global economic growth must be well below the historical annual income growth rate (of 1.93%) during 1971-2015—and this holds true under the optimistic assumption that we manage to bring about historically unprecedented reductions in carbon intensity and energy intensity.

The prognosis strongly suggests that we have reached a fork in the road. We could continue to grow our economies the way we did in the past, but this means we have to prepare for global warming of 3°C to 4°C by 2100 and run a big risk of having to adapt to “Hothouse Earth.” Adaptation would mean that we have to come to terms with the impossibility of material, social and political progress as a universal promise: Life is going to be worse for most people in the 21st century in all these dimensions. The political consequences of this are hard to predict.

But there is an alternative: We do whatever it takes to force through the technological, structural and societal changes needed to reduce carbon emissions so as to stabilize warming at 1.5°C (Grubb 2014; Steffen et al. 2018) and just accept whatever consequences this has in terms of economic growth (Ward et al. 2016). Whichever way, the bottom line is that the climate constraint appears to be binding. Or are we missing something: Is there a small group of (advanced) countries that have crossed the turning point of the CKC?

Can we put to rest the argument that halting warming requires accepting lower growth, as Obama argues we can? We systematically investigate Obama’s hypothesis that a small group of (advanced) countries has crossed the turning point of the CKC (Schröder and Storm 2018). The CKC hypothesis holds that CO2emissions per person do initially increase with rising per capita income (due to industrialization), then peak and decline after a threshold level of per capita GDP, as countries arguably become more energy efficient, more technologically sophisticated and more inclined to and are able to reduce emissions by corresponding legislation. We run panel data regressions using OECD Inter-Country Input-Output (ICIO) CO2 emissions data for 61 countries for the period from 1995 to 2011. To check the robustness of our findings, we construct and use three other panel samples sourced from alternative databases (Eora; Exio; and WIOD). We present a variety of models, and pay particular attention to the difference between production-based (territorial) emissions and consumption-based emissions, which include the impact of international trade (Schröder and Storm 2018).

The turning point for consumption-based CO2 emissions is at 93 thousand dollars – outside the sample range. Hence, we conclude that while there is some evidence of decoupling between economic growth and production-based (territorial) emissions, there is no evidence of decoupling for consumption-based emissions. Some OECD countries have managed to some extent to delink their production systems from CO2 emissions by relocating and outsourcing carbon-intensive production activities to the low-income countries. The generally used production-based GHG emissions data ignore the highly fragmented nature of global production chains (and networks) and are unable to reveal the ultimate driver of increasing CO2 emissions: consumption growth. Obama is wrong, therefore: there is no evidence of carbon decoupling—and mind you, it is no great achievement to reduce domestic per capita carbon emissions by outsourcing carbon-intensive activities to other countries and by being a net importer of GHG, while raising consumption and living standards. 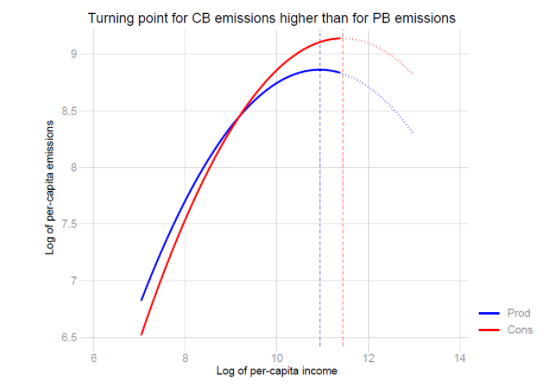 Our statistical analysis shows that, to avoid a climate catastrophe, the future must be radically different from the past. Climate stabilization requires a fundamental disruption of hydrocarbon energy, production and transportation infrastructures, a massive upsetting of vested interests in fossil-fuel energy and industry, and large-scale public investment—and all this should be done sooner than later. Steffen’s analogy of massive mobilization in the face of an existential threat is fundamentally correct. The problem for most economists is that it suggests directional thrust by state actors, smacks of planning, coordination, and public interventionism, and goes against the market-oriented belief system of most economists. “Economists like to set corrective prices and then be done with it,” writes Jeffrey Sachs (2008), adding that “this hands-off approach will not work in the case of a major overhaul of energy technology.” We thus have to discard the prevalent market-oriented belief system, in which government intervention and non-market modes of coordination and decision-making are inferior to the market mechanism and will mostly fail to achieve what they intend to bring about. Without a concerted (global) policy shift to deep de-carbonization (Sachs 2016; Fankhauser and Jotzo 2017), a rapid transition to renewable energy sources (Peters et al. 2017), structural change in production, consumption and transportation (Steffen et al. 2018), and a transformation of finance (Mazzucato and Semieniuk 2018), the decoupling will not even come close to what is needed (e.g. Storm 2017).

Political support for such a strategy of deep de-carbonization is not in the cards—not just in the U.S., but also in Brazil, Australia, and elsewhere. Ostensibly more progressive “green growth” approaches unfortunately remain squarely within the realm of business-as-usual economics as well, proposing solutions which rely on technological fixes on the supply side and voluntary or “nudged” behavior change on the demand side, and which are bound to extend current unsustainable production, consumption and emission patterns into the future. The belief that any of this half-hearted tinkering will lead to drastic cuts in CO2 emissions in the future is plain self-deceit; and we know, with Ludwig von Wittgenstein, that nothing is so difficult as not deceiving oneself. Hence, if past performance is relevant for future outcomes, our results should put to bed the complacency concerning the possibility of “green growth.” There is no decoupling of growth and consumption-based CO2 emissions – “green growth” is a chimera.