The Ocean Cleanup’s effort to encircle the Great Pacific Garbage Patch (GPGP) – a major plastic accumulation zone three times the size of France, located in subtropical waters between California and Hawaii – and collect plastic for eventual recycling, has stalled.

The Ocean Cleanup Array has suffered damage and thus been towed back to Hawaii for necessary repair, as reported today in the Hawaii Tribune Herald, Malfunctioning ocean cleanup boom to arrive in Hilo today:

State Department of Transportation spokesman Tim Sakahara said Friday the Harbors Division “is in coordination with” The Ocean Cleanup “regarding its damaged equipment used to remove garbage from the sea.”

Sakahara confirmed the anticipated arrival today of System 001 and its support crew in Hilo.

“The organization will perform damage assessments, which will help determine the length of time the asset will be in Hilo Harbor,” Sakahara said in an email.

“Harbor operations will continue as scheduled without impact to other vessels or the general public.”

I’ve written about the GPGP before, in Plastic Watch: First Ocean Cleanup Array to Launch Tomorrow and Plastic Watch: Great Pacific Garbage Patch Grows. My post on the launch of the array highlighted three risks, the third of which was the survivability of the system in rough Pacific conditions.

Ocean Cleanup has yet to disclose exactly what went wrong – and to be fair, may not itself yet know what the problem is. In a 31st December blog post, WILSON TO RETURN TO PORT FOR REPAIR AND UPGRADE, the group described the decision to cut short this mission:

Due to a structural malfunctioning of the cleanup system, today we made the decision to return to port earlier than planned. We will set sail as soon as an appropriate weather window is available.

On Saturday, December 29th, during a regular inspection of the cleanup system, our offshore crew discovered that an 18-meter end-section had detached from the rest of the system. Although it is too early to confirm the cause of the malfunction, we hypothesize that material fatigue (caused by about 106 load cycles), combined with a local stress concentration, caused a fracture in the HDPE floater.

It’s important to note that both the 580-meter main section and the 18-meter end section are both completely stable; all bulkheads are intact, and the end section has two stabilizers affixed to it, so rollover is not possible Also, because no material was lost, there have been no safety risks for the crew, environment or passing marine traffic. However, as the redundancy in the cleanup system’s sensors and satellite communication (which are mounted on both end sections) has now been compromised, we concluded it is sensible to return to port. 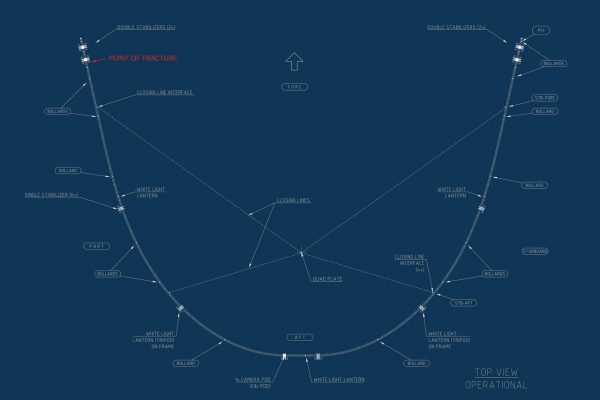 Blueprint of system, indicating the point of fracture

Source: Ocean Cleanup,  WILSON TO RETURN TO PORT FOR REPAIR AND UPGRADE

Death Knell: By No Means Assured

In discussing the decision to return to port, Ocean Cleanup emphasized that it anticipated problems might arise as its array moved from the design phase to implementation.

We are, of course, quite bummed about this as 1) we hoped to stay out for a bit longer to collect more data on plastic-system interaction, and 2) it introduces an additional challenge to be solved. At the same time, we also realize that setbacks like this are inevitable when pioneering new technology at a rapid pace. Being in port provides us with the  opportunity to make upgrades to the system with the aim of solving the plastic retention issue, which we previously reported.

A much more important problem than the break in the array itself  is that  apparently plastic is not staying inside its system – this is the  plastic retention issue mentioned in the Ocean Cleanup blog post above. A n earlier, November Ocean Cleanup blog post, WILSON UPDATE – TWEAKING THE SYSTEM,  reported on the array’s failure  to retain plastic it has initially collected, and speculated on some possible ways of tweaking the system to make it perform.

We are returning to port with terabytes of data that we will use in coming weeks and months to develop the necessary upgrades. The Maersk Transporter is also carrying around 2000 kg of plastic that we recovered from the patch over the past few weeks through a combination of the cleanup system and ghost net fishing (for comparison: once fully operational, System 001 is expected to harvest 1000 kg per week).

Forbes in Founder Of Ocean Cleanup Vows Return, Says Failure Talk Is ‘Rubbish‘ highlights the gap between this haul of a mere 2000 kg of plastic and what the group still hopes to achieve:

That’s a fraction of what The Ocean Cleanup still plans to collect. Slat said the goals remain intact, to clean up 50% of the patch in five years, with a 90% reduction by 2040, using an improved  fleet of 60 more units after testing of System 001 and an updated 002 are complete.

As Outside emphasizes in Was the Ocean Cleanup Just a Pipe Dream?:

Last fall ,with much fanfare, a 2,000-foot-long contraption of floating pipes was towed out to sea from San Francisco as the first step in an ambitious project to clean up the Great Pacific Garbage Patch, an estimated 1.8 trillion pieces of trash (including some 87,000 tons of plastic) floating between California and Hawaii. System 001, also known as Wilson, was supposed to pick up some of those pieces. The Dutch nonprofit behind the endeavor, the Ocean Cleanup (TOC), hoped to eventually deploy 59 more similar devices, claiming that all together they could collect half the debris in the patch within five years.

Now, after less than four months, System 001 is coming home almost empty-handed—and in pieces. It’s being towed to Hawaii for investigation and repairs after what Boyan Slat, TOC’s founder and a much hyped boy genius (he started the organization in 2013, when he was 18) has described in a blog post as “structural malfunctioning.”

Boyan Slat’s Ocean Cleanup device didn’t collect tons of plastic as planned during its first run at the end of 2018. But Slat says he’s heard plenty of trash talk about the failure of the mission. The effort is still on, he says. The 600-meter span is being towed to Hawaii. There, crews will go about fixing an end section that detached from the system in the middle of the Great Pacific Garbage Patch. The Ocean Cleanup hopes to relaunch in a few months, after analyzing data to make sure the problem doesn’t happen again.

“We think the fastest way to clean the ocean is to learn by doing,” said Slat, speaking from an office in the Netherlands. “We didn’t plan for it to break, but we always accounted for a possibly to take the system back in and out several times during this project.”

He’s seen recent headlines that the project has stopped or failed. “Of course, that’s rubbish,” Slat said. “This is just a bump in the road to success.”

Even if the Ocean Cleanup Array eventually can be made to work as designed, this setback highlights a larger problem with our general approach to plastics cleanup –  such as it is: the reliance on geez whiz golly  to-be-created technofixes, rather than changing behavior, now. And I mean today.

Instead, these technofixes remind me of the old joke about the physicist, engineer, and economist, who when marooned on a desert island with only tinned goods to eat- offer solutions to their predicament. The economist’s:  “Assume a can opener.”

Over to Outside for more on this general point:

But according to Marcus Eriksen, the cofounder of the 5 Gyres Institute, an organization committed to ending plastic pollution, such grand pipe dreams can get in the way of real solutions. “This is the sexy story right now. It’s easy, it’s digestible, and it plays to the lack of information on ocean plastics,” he says. “I can’t tell you how many times people have come to me with the same kind of story as Boyan Slat—‘We have a barge, we have an airplane, we have a ship to go scoop up trash from the sea!’”

Eriksen, who has been bringing attention to the Great Pacific Garbage Patch for more than a decade, believes the world cannot have both practical, proven efforts and moonshot experiments. Successful environmental endeavors, he says, “focus on prevention and reject distractions,” noting that cleaning the air in cities didn’t succeed because of smog-collecting systems. Instead, society rallied to reduce air pollution.

“There’s only limited time and resources that the public and policymakers have on this issue,” says Eriksen. “We need all hands on deck to focus on prevention. What the Ocean Cleanup is doing is taking public attention away from that fact.”

What Is To Be Done

I’m not willing to go as far as Eriksen and repudiate what the Ocean Cleanup is trying to do with its array outright. After all, even if we were to cease all use of plastics overnight, the GPGP – which is only one of  several such garbage patches, by the way – will still need to be cleaned up.

Slat agreed that preventing more plastic from entering the ocean is part of the solution but said something needs to be done about what’s already there.

“This plastic doesn’t go away by itself, and to just let hundreds of thousands of tonnes of plastic out there to be fragmented into these small and dangerous microplastics to me seems like an unacceptable scenario,” he said.

But I do agree that the main focus should be drastically reducing and eliminating use of plastic, immediately – rather than on relying on various magical measures to clean up unnecessary waste after it has been generated.

In a similar vein, I’ve written several  posts on the misspent reliance by governments on the recycling fairy to clean up plastic waste, rather than on instead mandating less consumption of plastic (see Plastic Watch: Five Flaws in the EU’s Single-Use Plastics Plan and Plastic Watch: Recycling Woes. This focus is particularly wrongheaded, now that China has for more than a year refused to accept most plastics imports for recycling (see Waste Watch: US Dumps Plastic Rubbish in Southeast Asia).

Going forward, the emphasis should be on reducing, reusing, and repairing – rather than relying on either the recycling fairy or other magical technofixes to solve the plastics crisis (see Four Rs: Reduce, Reuse, Recycle, and…Repair).

That being said, I hope the repairs in Hilo are completed quickly, and that The Ocean Cleanup’s engineers figure out a way to make the array work as designed, and return to to the GPGP as soon as possible.