Readers, here is a standalone Water Cooler on the Mueller report. Needless to say, I haven’t been following the ins and outs of #RussiaGate, as I suppose I have to call it, in any detail. What follows, then, is press coverage with commentary (as opposed to an over-arching theory of the case). Twitter-haters, there will be a lot of tweets; like it or not, that’s the field this story is being fought out on. I wish this were more coherent than it is, but c’est la vie! Have at it!

Good morning. The NYT didn't even try to caveat the truth to make the medicine go down a bit more smoothly for their readers. Their front-page headline this morning, as crystal clear as it gets: pic.twitter.com/9tCoHByQWB

(2) Moving the goalposts from “collusion” to “obstruction of justice.” As for example: “Whether Trump obstructed justice isn’t the attorney general’s call to make. It’s Congress’ decision.” So, that should keep the clicks coming for another few years.

Obstruction of justice as defined by FindLaw:

Elements of an Obstruction of Justice Charge

The elements required for a conviction on an obstruction of justice charge differ slightly by code section. For instance, prosecutors must prove the following elements for a conviction under section 1503 of the federal statute (influencing or injuring an officer or juror):

But regardless of the specific section of federal law (1501 through 1521) cited in a particular case, the prosecution need not prove any actual obstruction — the defendant’s attempt to obstruct is enough. The element of intent, which is central to such cases, is also usually the most difficult to prove; although memos, phone calls, and recorded conversations may be used as evidence to establish this.

IANAL. It’s not clear to me how you prove intent with Trump at all, because he emits so much bullshit his intent is opaque. I also don’t know whether there must be an underlying crime for obstruction; Guiliani says so, but the above seems to say not. It would seem to me, however, that Trump, by not firing Rosenstein or Mueller, has a case for not obstructing (assuming the Comey case can be distinguished).

Watching a procession of MSNBC voices downplay the Mueller probe or double-down on the conspiracy theory, I’m realizing that a “moving the goalpost” .gif doesn’t cut it. Anyone got a .gif where an entire stadium is uprooted, loaded onto a spaceship, & moved to a different galaxy?

(3) Good journalists and writers. Axios, of all places: “Be smart: These liberals/contrarians are right — they got this story and outcome more right than many who dominated Twitter and cable news.” Here’s a handy list. There are more than you would think. Thread:

Who never succumbed to Russiagate hysteria?

Below a list of 50 journalists, commentators etc & 15 media organizations who remained rationally skeptical throughout the Mueller investigation:

And of course Taibbi. Commenting on reaction to this post:

I’m not “celebrating.” I’m no fan of Donald Trump. I covered his campaign and wrote a whole book ripping him. What I care about it is this profession, which has been marred for a generation by this story. https://t.co/hSXrVAFODc

(4) Deprogramming: A giant task, and who even knows if it can be performed?

NPR tote bag people are my people. Professors, lawyers, wriers, even college deans; professionals all. So this is extremely distressing to me:

This is the saddest thing I've ever read. Robert Mueller was George Bush's post-9/11 FBI Chief who rounded up Muslims and was a key figure in WMD lies. And now this: https://t.co/g0wOIuC8jQ

And on this matter, at least, they all need to be gently led away. I can’t think of a historical precedent. Perhaps the bursting of the South Seas bubble?

Imagine how profoundly disorienting this moment is for consumers of liberal media, who were peddled a delusional and dangerous conspiracy theory as legitimate "news." https://t.co/5pISyAGgIz

The view from brunch:

#DonaldTrump has forced us to live through war as a nation for the last two years; he has caused depression, despair, confusion and death. We're not just sick at heart, but literally sick from him; from uncontrollable rage at the thought that he will get away with his crimes.

Where were these people when Bush whacked a few hundred thousand brown people? Or Obama destroyed a generation of black wealth?

Maybe now the Democrats will do a 2016 post mortem?

What Democrats really wanted from Mueller is evidence Clinton was a good candidate.

Because Stoller’s not wrong.

“Mueller report reprieve becomes Trump’s re-election weapon” [Associated Press]. “As the president’s lawyers debated legal strategy, Trump aides and political allies developed a plan to turn the end of the probe into the launching pad for a new round of attacks on the president’s foes and a moment to reinvigorate his supporters in the run-up to the 2020 campaign. Trump surrogates rushed to take a victory lap, depict the probe as a failed coup and rub the results in the face of Democrats, many of whom had spent months promising that Mueller would turn up more.” • Well, if one does not characterize #RussiaGate as a “failed coup” (see Naked Capitalism here), how ought one to characterize it? What is giving the intelligence community veto power over the selection of a President other than a coup? And if #RussiaGate is what they did to Trump, imagine what they’ll do to Sanders.

And then Mike Gravel:

It's almost like focusing on weird neo-McCarthyite conspiracy theories about Russia for two years wasn't a winning strategy for the Democratic Party https://t.co/QOzoXnKDqt

Of course, there’s also the issue that in 2020 Trump can say — with reason, after two solid years of hysteria from almost every venue over what turned out to be a damp squib — that press coverage of his campaign is, well, fake news. And how exactly will the press go about disproving that? What a weapon they’ve handed him. “Mueller report: Trump cleared of conspiring with Russia.” After all the yammering and stamping and frothing and mimosas!

Holding office rather than power:

Apropos of nothing in particular, one of the most disastrous mistakes of the Italian left during the Berlusconi years was waiting for the justice system to disqualify him from political office or, better still, jail him.

Exactly what liberal Democrats did with Mueller. I don’t understand the mentality; the wish for an external, apolitical authority figure to come in and settle the matter. Why not practice politics, instead? As the Financial Times says:

Liberals, on the other hand, are like a child who has discovered Santa Claus does not exist. Enormous faith was invested in Mr Mueller’s report as a magic bullet to solve the Trump problem. By the same token, an outsized role was conferred on Vladimir Putin as the evil genius who robbed Hillary Clinton of the presidency. There were large dollops of evidence supporting both views.

I don’t understand the liberal Democrat need to demonize Trump, either; perhaps so they can keep him distinct, mentally, from the other very rich figures in their donor class? Back to Berlusconi–

“The case for normalizing Trump” [Vox]. From 2016, still germane: “[S]everal students of authoritarian populist movements abroad have a different message. To beat Trump, what his opponents need to do is practice ordinary humdrum politics. Populists in office thrive on a circus-like atmosphere that casts the populist leader as persecuted by media and political elites who are obsessed with his uncouth behavior while he is busy doing the people’s work. To beat Trump, progressives will need to do as much as they can to get American politics out of reality show mode.” And the precedent: “In a post-election op-ed, [Luigi Zingales of the University of Chicago] revisited these themes and observed that the two politicians who beat Berlusconi in elections — former Prime Minister Romano Prodi and current Prime Minister Matteo Renzi — had two important things in common: ‘Both of them treated Mr. Berlusconi as an ordinary opponent. They focused on the issues, not on his character. In different ways, both of them are seen as outsiders, not as members of what in Italy is defined as the political caste.” • Needless to say, the Democrats have taken — and will continue to take, absent deprogramming their base — a different approach.

Interestingly, however, Buttigieg agrees with Zingales:

Gotta say I like that answer. It’s articulate, like Obama, but substantive in a way that Obama never quite was.

(8) Talking Points: At least they’re consistent about some things:

Someone got the memo pic.twitter.com/RRIHqUAqeT

Mueller report confirms no Linux on the desktop.

Readers, feel free to contact me at lambert [UNDERSCORE] strether [DOT] corrente [AT] yahoo [DOT] com, with (a) links, and even better (b) sources I should curate regularly, (c) how to send me a check if you are allergic to PayPal, and (d) to find out how to send me images of plants. Vegetables are fine! Fungi are deemed to be honorary plants! If you want your handle to appear as a credit, please place it at the start of your mail in parentheses: (thus). Otherwise, I will anonymize by using your initials. See the previous Water Cooler (with plant) here. Today’s plant (Peter): 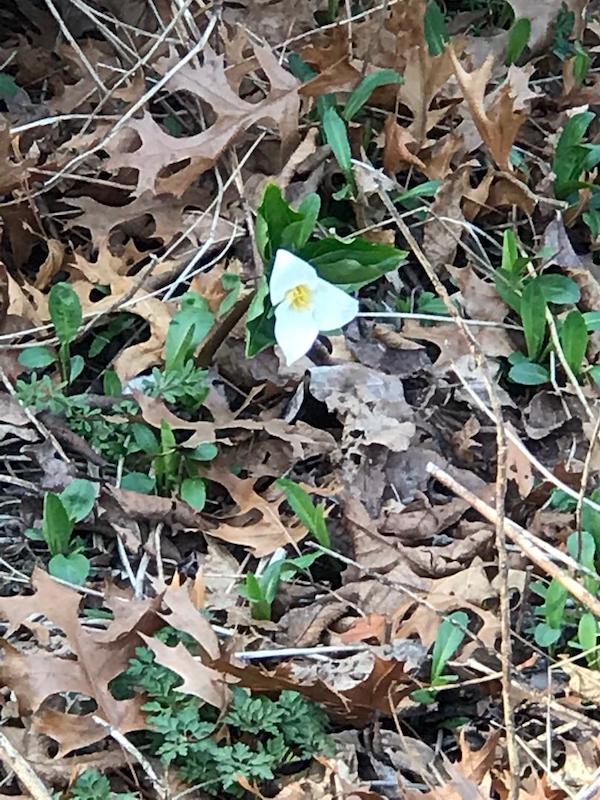 Peter writes: “First trillium — Redmond, Washington.” You get a bonus plant, this one for spring!