Yves here. This article has a significant finding. It contends that while the shift of manufacturing jobs from the US to China did create a tremendous number of jobs in China, it did not lead to an increase in manufacturing wages.

This would seem implausible until you remember that China had (and still has) hundreds of millions in the hinterlands working in substance farming. These workers could move to industrializing areas and get higher wages, which kept manufacturer from having to compete for workers to fill demand from the US. To put it another way, the great increase in living standards in China was due to hundreds of millions from the countryside being able to earn manufacturing-level incomes, and not to global demand for Chinese goods also increasing those incomes.

Trade between the US and China is widely thought to have contributed significantly to the decline in US manufacturing employment between 1999 and 2007. Flipping the point of view, this column examines the impact on China of the growth in trade and finds that for every US manufacturing job lost, almostsix new Chinese manufacturing jobs were created. International trade did not contribute to faster wage rises for Chinese industrial workersbut instead channelled agricultural and non-participating workers into the industrial labour market.

The last two decades of trade globalisation generated a large rise in imports from low-income countries like China to the developed world. While its negative effect on manufacturing employment in high-income labour markets is well documented (Autor et al. 2013, Bloom et al. 2016, Dauth et al. 2014, Pierce and Schott 2016) and frequently referred to as the ‘China Syndrome’, its flip-side effect on labour markets in China has not been subject to much empirical scrutiny.

New research by two of us (Ouyang and Yuan 2019) relates the surge in Chinese industrial exports to changes in China’s local labour markets. Analogous to research on the import exposure of US commuting zones by Autor et al. (2013), we divide China into prefecture-level cities and construct measures of export exposure based on a city’s initial industry specialisation. This method yields a detailed map of geographic export exposure depicted in Figure 1. 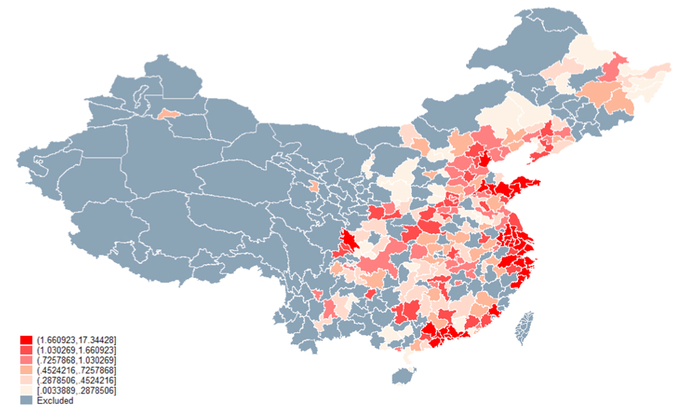 Similar to America’s commuting zones, trade exposure varies greatly across Chinese cities. The 17% most-export-exposed cities (in red) witnessed on average an increase of US exports by $830 million between 2000 and 2006. This compares to only $22.76 million in additional US exports for the 17% least-exposed cities (in beige). Many of the most-exposed Chinese cities are concentrated in coastal regions, but they can also be found inland with stark differences between neighbouring prefectures.

As export growth can influence local economic activity and vice versa, any causal analysis requires a so-called instrument, namely, variables that proxy for export exposure without being influenced by Chinese labour market outcomes. Calculating export exposure based on the export growth from other emerging economies to the US provides such an instrument because other emerging countries also benefited from strong US product demand.

Manufacturing Employment Growth: China Versus the US

The main analysis draws on China’s annual survey of industrial firms (available for the period 1998-2007). In Figure 2, we rank 112 different manufacturing industries by the strength of their US export growth. Red circles denote the industry-specific employment growth in China and blue crosses denote the corresponding employment change for the US. Two-stage least square regressions show that a one-standard-deviation increase in export exposure per worker is associated with a 0.38 standard deviation in the change in industrial employment as a share of working-age population.

Figure 2 Employment growth in China versus the US by industry rank in export growth, 1999-2007 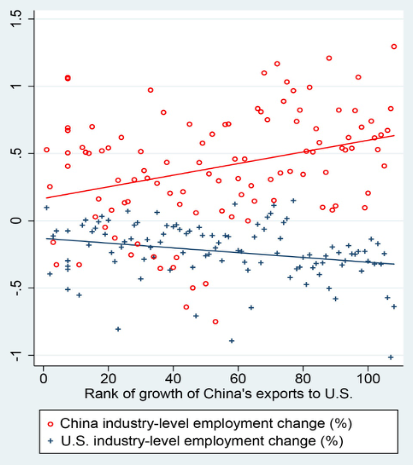 In the paper, we also undertake a city-level analysis using aggregate city-level statistics – a Chinese city (i.e. prefecture) at the 75th percentile of export exposure experiences an increase in the ratio of manufacturing employment to the working-age population by 4.5 percentage points compared to a city at the 25th percentile. The aggregate analysis reveals that China’s export growth created approximately 12.2 million new manufacturing jobs. For comparison, the corresponding decline for US manufacturing employment is only about 2 million (Autor et al. 2013). This means that every US manufacturing job lost to trade with China came with the creation of up to six new manufacturing jobs in China. The much lower labour productivity of Chinese workers accounts for a large part of this important asymmetry between job destruction and job creation. Industrial wages are roughly ten times higher in the US than in China.

Interestingly, Chinese regions with a surge in manufacturing employment do not show a significantly higher population growth to the extent that we measure it correctly. This may be explained by China’s hukou system, which imposes tight controls on migration flows. So where do China’s new manufacturing workers come from?

City-level labour statistics show that cities more exposed to the US export surge experience an additional expansion of service-sector jobs (presumably due to higher demand from an increased working population) – each new manufacturing job contributes approximately 0.68 new service jobs. In the absence of economically significant (measured) migration, this overall increase in the local workforce coincides with a strong decline in local agricultural employment and non-participation in the labour market. However, we cannot exclude that clandestine migration flows also play a role in sustaining a highly elastic labour supply.

Surprisingly, a city’s export exposure has only a small and negative effect on the average local manufacturing wage. The differential (log) wage growth is -1.2% for the period 1999-2007 when comparing the 75% and 25% quantile of export exposure.

Yet, this negative average-wage effect does not imply that China’s low-skill workers are worse off due to increased exports. The small negative wage effect of exports suggests a very elastic labour supply as well as a net labour market entry at (or near) the minimum wage. Previous research has documented a large income gap between agricultural (rural) and non-agricultural (urban) sectors in China (Meng and Zhang 2001, Sicular et al. 2007, Brandt and Zhu 2010, Meng 2012). Low-skill agricultural or unemployed workers benefit most when their city of residence experiences a positive export-demand shock – their income and welfare gains are substantial even if they find employment at (or below) the average manufacturing wage.

The annual value of China’s exports to the US increased by $240 billion from 1999 to 2007, whereas China’s imports from the US grew by only $40 billion. Such a rapid and asymmetric surge in trade influenced not only the US labour market as highlighted by a growing literature, but similarly transformed the Chinese labour market. The data suggest a dramatic employment increase in export-led industries and cities where these industries were initially located. Partly due to a much lower Chinese labour productivity, each job lost in the US is associated with up to six new manufacturing jobs created in China. Much of the new manufacturing employment in China goes to local workers previously employed in agriculture or not participating in the workforce at all. A highly elastic local labour supply also explains why the export surge did not create any pressure on the average industrial wage. This contrasts with the strong negative wage effects of trade identified in the US manufacturing sector.