Yves here. Steve Keen gave a presentation in 2016 which identified economies that were at risk of a serious recession, including China, South Korea, and Finland, if their level of debt to GDP merely stabilized. This talk is fast-paced and very much worth watching.

Chinese corporate defaults this year through April are 3.4 times the amount last year.

Since the global financial crisis, the total value of outstanding corporate bonds has doubled, from around $37 trillion in 2008 to over $75 trillion today. But the growth has been far from even, with non-financial debt growing much more rapidly in certain jurisdictions. As the volume and price of this debt has grown, so too has its riskiness. And that could be a recipe for disaster, warns Sir John Cunliffe, deputy governor for financial stability at the Bank of England.

In the US, non-financial debt is up 40% on the last peak in 2008. Cunliffe expressed even greater caution concerning emerging markets, where corporate debt as a proportion of the global debt pile has grown the most over the past 10 years. “Emerging market debt now accounts for over a quarter of the global total compared to an eighth before the crisis,” Cunliffe said.

By 2016, emerging market corporations were issuing ten times more money ($711 billion) than before, much of it in hard foreign currencies (mainly euros, dollars and yen) that will prove much harder to pay back if their local currency slides, as is happening in Turkey and Argentina right now. Although bond issuance by emerging market companies declined by 29% in 2017 and remained around the same level in 2018, it is still approximately 7.5 times higher than the pre-crisis level.

Much of the increase has been driven by China as it transitioned from a negligible level of issuance of corporate debt prior to the 2008 crisis to a record issuance amount of $590 billion in 2016. During that time the number of Chinese companies issuing bonds soared from just 68 to a peak of 1,451 and the total amount of corporate debt in China exploded from $4 trillion to almost $17 trillion, according to BIS data. By late 2018 it had reached $19.7 trillion.

“There has been a persistent buildup of private debt to record levels in China,” Cunliffe said. Much of this increase took place in the direct aftermath of the financial crisis. The largest increases have been in the corporate sector, mainly in state-owned enterprises. At last count, China’s corporate debt-to-GDP ratio was 153%, enough to earn it seventh place on WOLF STREET’s leaderboard of countries with the most monstrous corporate debt pileups (as a proportion of GDP), 18 places above the US. This chart compares the rise of non-financial corporate debt in China and the US: 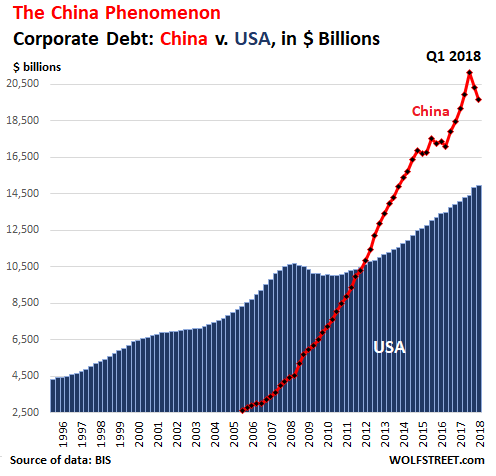 The rate of growth and level of debt in China have passed the points where other economies, advanced and emerging, have experienced sharp corrections in the past, noted Cunliffe citing research carried out by the Bank of England.

Since early 2017 the Chinese authorities have been scrambling to deleverage its corporate sector and shrink its shadow banking system, with a certain degree of success (the hook in the chart above): corporate debt-to-GDP ratio has fallen in the last two years by almost 10%. However, in the face of slowing economic growth, the Chinese government has dialed back some of these reforms as concern rises that a sharp slowdown in growth would make China’s elevated debt levels even less sustainable.

And if things get seriously sticky in China’s debt markets, it won’t take long before they’re felt elsewhere, Cunliffe cautioned:

The Chinese economy is now pivotal to regional growth and one of the main pillars of world growth and trade. As well as the economic effects and effects directly through banking exposures, it is likely that there would be a severe impact on financial market sentiment, [as happened] in 2015 when a period of sharp correction in domestic Chinese financial markets sparked a correction in US financial assets.

Problems once again appear to be on the rise in China. Chinese companies defaulted on 39.2 billion yuan ($5.78 billion) of domestic bonds in the first four months of 2019, 3.4 times the total for the same period of 2018, according to data compiled by Bloomberg. For the moment, there’s little sign of the problems spreading far beyond Chinese borders. In most advanced economies, as well as quite a few emerging markets (Turkey and Argentina excluded), bond spreads — the amount charged for risk, be that credit risk or liquidity risk — are still at or near historically low levels.

But conditions can change on a dime, as the short-lived drama at the end of 2018 amply demonstrated. Between mid-October and the end of the year spreads on investment grade bonds widened by around 50 bps, all on the back of “relatively modest amounts of news,” Cunliffe noted. “Since then, these moves have fully retraced – spreads at the start of May were the same as they were in mid-October last year. Bonds in other currencies and high yield bonds went on a similar round trip.”

When it comes to expectations about the value of debt, the market can be highly susceptible to changes in sentiment, meaning a “correction can come very quickly”. As Cunliffe warns, given the “current compression of risk pricing,” not to mention the sheer abundance of poor quality, mispriced bonds out there, “such a correction could be a sharp one.” By Don Quijones.

“Zombie firms,” kept alive by low interest rates, account for up to 14% of UK companies. Read… Businesses in “Critical Distress,” Bankruptcies Surge in the UK