Powered by the iffy situation in the Persian Gulf, the Strait of Hormuz, and the Gulf of Oman, with attacks on tankers and now the downing of a US drone, the price of crude oil got a little nervous in recent days. WTI jumped about 6% today to over $57 a barrel.

But this was just a minor uptick in the overall scheme of things: The US, which has become the largest oil producer in the world, is in the middle of its second oil bust in five years: 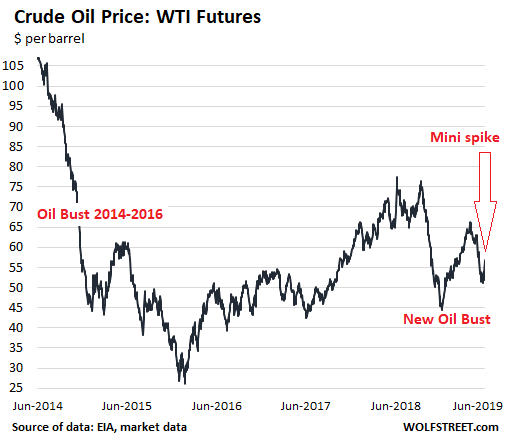 These two oil busts are largely a consequence of surging US crude oil production. During the oil bust of 2014-2016, the price of WTI collapsed by over 75%, careening from $107 per barrel to a low of $27 per barrel in 18 months, before starting to rebound. In the process, a slew of oil-and-gas drillers filed for bankruptcy.

For a while it looked like the shale boom, where all the growth in production had come from, was running out of money, and therefore out of fuel. Production fell sharply from early 2015 through much of 2016, but then new money from Wall Street appeared, and production began to soar again, hitting new records all along the way.

Shale wells produce a variety of liquid hydrocarbons (they also produce gaseous hydrocarbons which are not included here). This production of crude oil and petroleum products soared from just over 7 million barrels per day (bpd) in 2010 to 16.6 million bpd currently, according to EIA data: 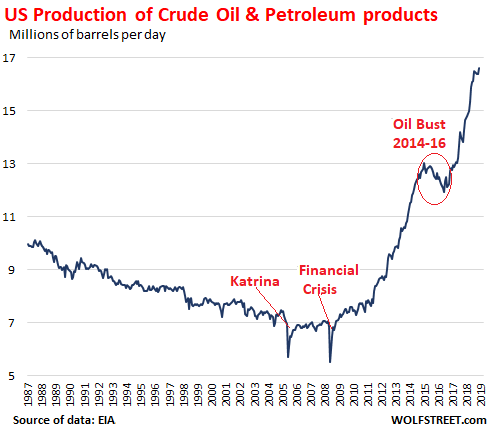 This surge in production comes even as shale oil-and-gas drillers have essentially been cash-flow negative in their entire history, drilling more and more of their investors’ funds forever into the ground. But so far so good — as long as it’s not my money. 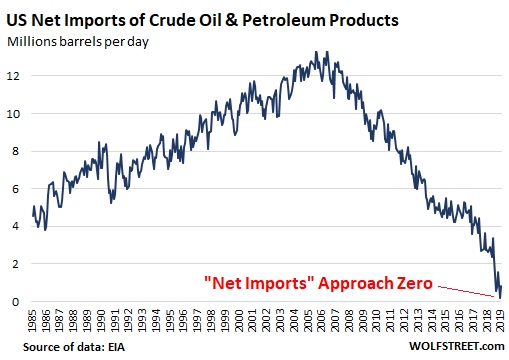 The fact that the US imports a lot of crude oil and petroleum products, even as it exports a lot too, is related to a variety of factors and market conditions.

For example, California is the fourth largest oil producing state in the US, but it’s not enough. It’s not connected via pipelines to producing regions east of the Rocky Mountains. So it gets some oil by oil train. It imports oil from Alaska. And it imports the rest from other countries.

But California’s refineries also export gasoline to Mexico and other countries – try to explain this to Californians who groan under high gasoline prices! This mismatch of supply and demand, lacking infrastructure, and global factors plays out across the US and leads to a mix of imports and exports.

The jobs are well paid. The business has a large high-tech component, involving highly paid technology employees and contractors, along with expensive specialized tech equipment and software. In addition, it involves sophisticated heavy equipment in the field that is fabricated in factories around the US. It involves transportation to get this equipment and supplies to the oil field. It involves the construction of infrastructure, such as pipelines and oil storage facilities, processing facilities, and the like.

Oil-and-gas related industries and their suppliers weigh heavily in US industrial production and manufacturing, but also in services such as engineering.

Back when the US was the largest net-importer of crude oil in the world, any increase in the price of oil siphoned most of this money out of the US economy to oil-producing countries. As consumers and businesses had to shift spending dollars from US products to products based on imported oil, a big surge in oil prices – the “oil shock” – could trigger a recession.

This picture has now completely changed. And Fed Chair Jerome Powell made note of it during the post-meeting press conference on Wednesday.

While there are some strengths in the US economy, such as services and consumer spending, he said, there are also some weak spots, particularly business investment and manufacturing production. He listed a number of factors, including “lower oil prices.” They not only contribute to “lower investment,” but also to lower manufacturing production as purchases of new equipment are put on hold.

This is already showing up. The plunge in oil prices since August has caused the oil-and-gas sector to get skittish with capital expenditures this year, and Powell picked up on that. Investment in the US shale sector has a big impact on the real economy.

This became apparent during the 2014-16 oil bust when the sector drastically cut back on investing. The overall economy started to slow in 2015, and in 2016, GDP growth was just 1.6%, the worst since the Great Recession. When the shale patch recovered, economic growth accelerated.

A higher oil price, say over $75 a barrel, would unleash investment in the US oil patch, and it would unleash orders for new equipment and services. When companies invest in US shale oil, it triggers a whole chain of activities in the real economy.

Whatever amount consumers spend on gasoline is part of “Consumer Spending” which accounts for about 70% of GDP. So, when gasoline prices rise, consumers with limited budgets shift some of their spending from Walmart’s imported doodads to gasoline. In this scenario, gasoline sales would rise a lot and Walmart doodad sales would fall some, and it would all flow into “consumer spending.”

Imported doodads siphon money out of the US economy (imports are a negative value in the GDP formula). So every dollar a consumer shifts away from imported doodads to gasoline ends up boosting the overall US economy – though it might slow China’s economy a tad.

Obviously, there are dark consequences of higher gasoline prices: For example, they may also shift dollars from things like food and healthcare to gasoline. Higher gasoline prices make consumers surly, and squeeze spending on discretionary things, such as movies or restaurant meals. But they’re all shifts within “consumer spending.”

If the price of WTI goes back to $75 or $80, there will be a flood of new investment in the oil patch in the US. This spending would flow into manufacturing and services. It would flow into wages. It would flow into trucking and tech. It would ricochet around the US through the multiplier effect. Now that the US is the largest oil and natural gas producer in the world, higher prices for these products are actually beneficial to the overall US economy, just like they are beneficial to OPEC. This is a new experience for the US.

For six months now, folks said the Fed had made a “U-turn” and would cut rates at the “next” meeting, etc. But none of it happened — and might not happen. Here’s why, in Powell’s words. Read… What Powell Really Said about the Economy and What Would Trigger a Rate Cut