Thank you for all the excellent suggestions for books to read yesterday (and consider collectively taking yourselves up on your suggestions, too). I finished Snowden’s autobiography and am now starting Richard Powers’s The Overstory! (Several readers commented that they don’t read books anymore. Why?)

For by the duration of the Naked Capitalism holiday season, I’m going to run Water Cooler as an open thread (if I can manage to get WP to accept my having checked the “Allow comments” box).

Here, however, as a conversation starter, is a remarkable statement by Pete Buttigieg, only 29 seconds long. It’s all the more remarkable, since Buttigieg majored in history at Harvard:

It's just a great big bowl of nonsense, but he looks confident when saying that stuff pic.twitter.com/7j45fHDlk9

Ellison is correct on the Declaration of Independence. He’s also correct that “they did it for the money” (see Dark Bargain: Slavery, Profits and the Struggle for the Constitution), but incorrect if he’s implying that’s the only reason they did it. I mean, there’s never a single reason for anything. Also, terrible advance work from the Buttigieg campaign. Who allowed that background?

Talk amongst yourselves! Do remember, however, that this is a holiday for the moderators as well, so don’t make them work hard. Be excellent to each other.

Readers, feel free to contact me at lambert [UNDERSCORE] strether [DOT] corrente [AT] yahoo [DOT] com, with (a) links, and even better (b) sources I should curate regularly, (c) how to send me a check if you are allergic to PayPal, and (d) to find out how to send me images of plants. Vegetables are fine! Fungi and coral are deemed to be honorary plants! If you want your handle to appear as a credit, please place it at the start of your mail in parentheses: (thus). Otherwise, I will anonymize by using your initials. See the previous Water Cooler (with plant) here. Today’s plant (TH): 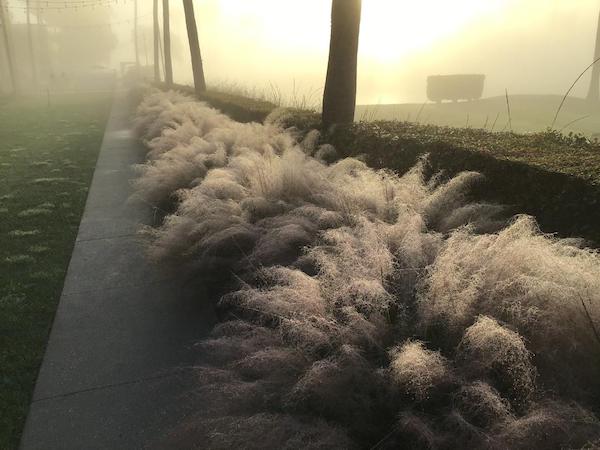 TH writes: “I was wishing I had my regular camera because the thick fog was a pretty vail to the rising sun, when it occurred to me I have a new untested iPod camera. This grass with it’s oh so delicate feathery fronds was draped in sun-drop jewels. The camera has no exposure control, so it exposed for the bright sun, leaving lots of deep shadows—but still, not bad for a tiny auto camera.” Fun!

Again, if any of you go out on your Christmas walks with camera (or, I suppose, phone), I’m running out of plants. Wintry plants would be especially appreciated!