In my slow perambulation through the biosphere, I’ve looked at mangrove swamps and coral reefs. Today, I’ll look at estuaries! From the air, the Yaquina Estuary: 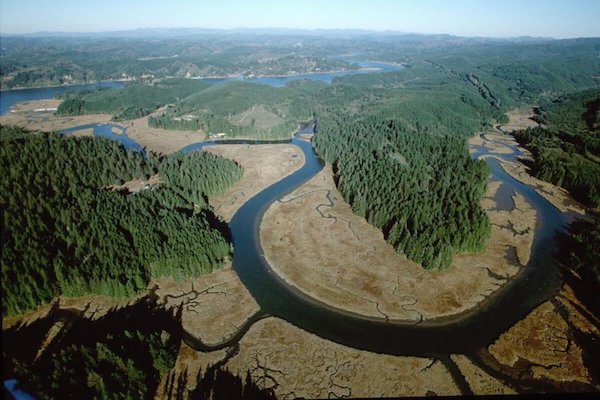 And I’m not sure where this one is, but it looks a bit like Maine: 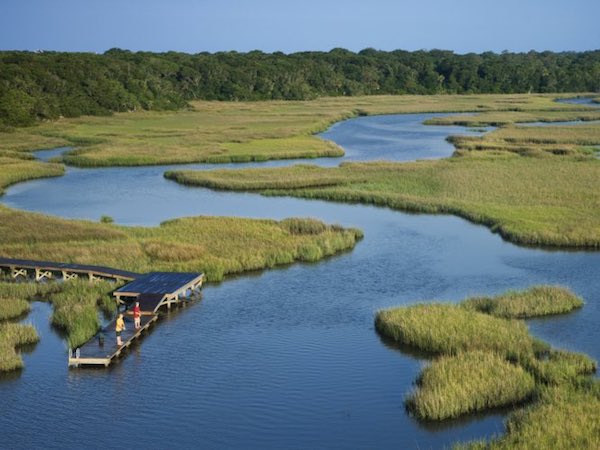 (There might be something to the idea that our sense of beauty is adaptive.) Here is a map of well-known estuaries, like New York Harbor and the Pearl River:

And here is a map of estuaries, globally (marked in orange):

However — as New York Harbor and the Pearl River, not to mention to Mississippi delta — we’re losing or destroying our estuaries. From the San Francisco Chronicle, “New maps show how little is left of West Coast estuaries“:

The cutting-edge survey led by the National Oceanic and Atmospheric Administration determined that 85% of vegetated tidal lands that once existed in California, Oregon and Washington has been diked, drained or cut off from the sea.

The study, published Wednesday in the scientific journal PLOS One, documented dramatic decreases in wetland habitat around San Francisco Bay, the Sacramento-San Joaquin River Delta and nearly 450 other bays, lagoons, river deltas and coastal creek mouths throughout the West.

“We now have a new and considerably more accurate measure of the historical extent of these estuaries,” said Laura Brophy, director of the estuary technical group at the Oregon Institute for Applied Ecology and the lead author of the study. “Having accurate spacial mapping is important because many groups use these maps to locate restoration opportunities and to understand the impact we have had on the landscape.”

More generally, from the International Union for Conservation of Nature and Natural Resources, “The Management of Natural Coastal Carbon Sinks“:

Tidal salt marshes are located on prime coastal real estate and in the last century extensive areas were lost to development of ports and residendial complexes…. Construction of roads and causeways through marshes and coastal bays has disrupted tidal floooding and marsh hydrology. Proposals to harness tidal power are one of the newest threats to marshes. Some schemes are based upon construction of barrages that alter tidal flooding patterns. These activities continue to threaten marshes, and in some countries marsh loss is permitted if equal or greater areas of marsh are created or restored elsewhere. Marshes that remain face a suite of multiple stressors that include invasions of exotic species, climate change, and pollutoon with excessive nutrients, pesticides, herbicides, heavy metals and organic compounds released into coastal waters.

But what, you ask, is an estuary? In what follows, I’ll answer that question. Then I’ll address the issue of whether estuaries are a carbon source or a carbon sink. Finally, rather than looking at organizations who are mobilizing to protect or restore issues, I’ll veer off to the concept of “blue carbon,” and who is supporting it.

Estuaries and their surrounding wetlands are bodies of water usually found where rivers meet the sea. Estuaries are home to unique plant and animal communities that have adapted to brackish water—a mixture of fresh water draining from the land and salty seawater….

Estuaries are among the most productive ecosystems in the world. Many animals rely on estuaries for food, places to breed, and migration stopovers.

(There are also freshwater ecosystems similar to estuaries, along the Great Lakes, for example.) Fascinatingly, at least to a taxonomy geek, estuaries can be classified based on geomorphology (“lagoon”) or water circulation (“salt wedge”), or in more complex ways. I’m going to skip over the obligatory economic arguments (“the total fish catch in estuaries contributes $4.3 billion a year“) and go directly to carbon.

Are estuaries carbon sources or carbon sinks? Up until recently, they were considered sources (“heterotrophic“). But science seems to have changed. For example, “Salt marsh aids in fight against climate change“:

Nelson Mandela University researchers are studying how the salt marsh in the Swartkops estuary is helping to combat climate change.

The marsh sequestrates carbon by trapping and stabilising leaf litter, mud and sticks in the water.

This sediment built up among the marsh plants and as long as the system was left intact it inhibited the release of carbon dioxide, a key driver of climate change, study co-ordinator and shallow water ecosystems research chair Prof Janine Adams said.

“The global loss of these coastal salt marsh ecosystems reduces the capacity of natural carbon sinks.

“When we degrade or disturb them . . . carbon gets released back into the atmosphere as carbon dioxide.”

After collecting dozens of such samples — called core samples — up to a meter long and analyzing how much carbon they contained, [John Rybczyk and Katrina Poppe of Washington University] concluded in a report this year that the portion of the preserve restored to the tides in 2012 is excelling at preserving carbon.

That carbon is primarily in the form of plant matter that gets buried under wet sediment, where oxygen can’t reach it to start the decomposition process that would release carbon dioxide.

“Previous to the restoration, that area was actually losing carbon,” Rybczyk said. “It was subsiding, so it wasn’t gaining carbon at all.”

In recent years researchers have determined that blue carbon wetlands—those found in coastal ecosystems—store more carbon than their limited size would suggest. Should sea levels continue to rise as projected, blue carbon wetlands are expected to play a growing role in global carbon calculations.

To understand how transitions in coastal ecosystems will affect carbon budgets, Krauss et al. studied how carbon is stored, sequestered, and transported in estuaries in the southeastern United States. The researchers specifically looked at tidal freshwater forested wetlands and low-salinity marshes, two neighboring habitats in the upper estuary that may transform as ocean water encroaches farther inland in the coming decades. The study is the first to explore the carbon dynamics across these coastal environments, which occur around the world.

The researchers established transects along two rivers, the Waccamaw River in South Carolina and the Savannah River in Georgia. The transects spanned four wetland types characterized by freshwater to low-salinity conditions. (The salinity of low-salinity, or oligohaline, marshes is approximately 5.0 practical salinity units. In comparison, the salinity of marine environments is approximately 30.0 practical salinity units). At each wetland, the scientists recorded the aboveground carbon stock housed in the trees, shrubs, herbaceous plants, and downed woody debris and belowground carbon stock in soils, including plant roots and sediments. They also measured the flux of carbon between the soil, vegetation, and atmosphere and tracked how carbon moves between habitats.

However, the tidal freshwater forested wetlands and marshes differed in how they stored carbon. Whereas the tidal freshwater forests store an appreciable amount of carbon in aboveground woody material, the carbon generally migrates belowground into the roots and soil as salinity increases downstream and herbaceous vegetation becomes more prominent. The more saline lower reaches of the transects also appear to store more carbon than their upstream counterparts.

Although it is still unknown if similar wetlands behave comparably in different parts of the world, the research positions upper estuarine wetlands as carbon storage, sequestration, and flux powerhouses.

(I’m quoting great slabs of these studies because the living processes are so beautiful!)

So, there’s that phrase, “blue carbon.” What does it mean? Again from NOAA:

Blue carbon is simply the term for carbon captured by the world’s ocean and coastal ecosystems….[O]ur ocean and coasts provide a natural way of reducing the impact of greenhouse gases on our atmosphere, through sequestration (or taking in) of this carbon.

Sea grasses, mangroves, and salt marshes along our coast “capture and hold” carbon, acting as something called a carbon sink. These coastal systems, though much smaller in size than the planet’s forests, sequester this carbon at a much faster rate, and can continue to do so for millions of years. Most of the carbon taken up by these ecosystems is stored below ground where we can’t see it, but it is still there. The carbon found in coastal soil is often thousands of years old!

[W]hen I was writing my piece on coral, I skipped writing up what looked like an interesting case study in Madagascar (IIRC), first because the language sounded driven by marketers (“blue carbon”), second because the project was driven by carbon credits.

One method of slowing climate change impacts is to incorporate coastal wetlands into the carbon market through the buying and selling of carbon offsets. This approach creates a financial incentive for restoration and conservation projects by helping to alleviate federal and state carbon taxes aimed at discouraging the use of fossil fuels. When fewer greenhouse gases are emitted, less pollution is created. When there is less pollution to tax, the process benefits not only the environment but also the financial well-being of the community doing the restoration.

(I don’t know whether it’s indicative that the first links are to scams discovered by our own Richard Smith.)

Back to blue carbon. I don’t have time to track the phrase “blue carbon” to its origin; I did search the PR- and NGO-focused “Wrong Kind of Green” site for “blue carbon,” and didn’t find anything. I did, however, find a very polished site called “The Blue Carbon Initiative” (“Mitigating Climate Change Through Coastal Ecosystem Management”).

The International Blue Carbon Initiative is a coordinated, global program focused on mitigating climate change through the conservation and restoration of coastal and marine ecosystems.

From their events page:

Climate finance for coastal resilience – what is next for Blue Natural Capital? This event will feature investors, including governments, multilateraldevelopment banks and private investors, discussing the landscape and needs for fast-tracking investments into coastal resilience projects, building on nature-based solutions. Organized by IUCN, Luxembourg and Conservation International.

So, when I come across an NGO I want to get to know better, I look for the board and the staff. The Blue Carbon Initiative doesn’t seem to have a board (or a funding source), but it does have co-ordinators:

Working from my elementary knowledge of group dynamics in small meetings, I’d say that Conservation International is running the show at the Blue Carbon Initiative. From their Wikipedia entry:

Woo hoo! Another NGO to get to know better. Here’s an abbreviated list of Conservation International’s Board of Directors. I’ve placed the business type in square brackets after the name of each director, thus: “[mortgage finance].
”

Stewart A. Resnick
Chairman of the Board, The Wonderful Company [holding company]

And here I’ll stop. Needless to say, if you think The Magic of The Marketplace™ cannot solve the climate crisis, Conservation International is not the place for you, nor are its straws and front groups. I would dearly love to know if “blue carbon” originated with the scientists, or as a bullet point developed by a public relations firm for the investors. And, at the very minimum — at least until further notice; scientist readers? — look askance at any usage of the term “blue carbon” until you understand the venue and the funding sources. Discouraging, because “blue carbon” is a beautiful term. The beauty is the hook, I suppose.[1]

[Ramarren] was looking out the glass side of the aircar at the five-hundred-mile circle of fair weather and blue sea that surrounded them. Ramarren was tired, and let himself relax a little in this pleasant moment of suspension, aloft in a glass bubble in the center of the great blue and golden sphere.

“It is a lovely world,” the Shing said.

“The jewel of all worlds… Is Werel as beautiful?”

“No. It is harsher.” … Ramarren said, and as he said it a little gust of panic blew across his mind and died away. He sensed the presence of the Shing’s mind in his own; while talking, [the Shing] had reached out mentally, found his defenses down, and taken whole-phase control of his mind. That was all right. It showed incredible patience and telepathic skill on the Shing’s part. He had been afraid of it, but now that it had happened it was perfectly all right.