Yves here. I had no idea that Luther was geographically disadvantaged.

The Protestant Reformation, led by Martin Luther, was one of the most transformative periods of European (if not world) history in the second millennium. How did this movement succeed? This column offers a theory that combines relational diffusion (via Luther’s network ties) with spatial diffusion (via trade routes in the Holy Roman Empire), and substantiates this theory using data on Luther’s letters, travels, and students. Luther’s network alone does not explain the success of the Reformation, but his network in combination with the pre-existing ties created by trade routes explains much of its success.

A growing literature in the social sciences highlights the many economic, political, and social causes and consequences of the Protestant Reformation (Becker et al. 2016, Becker et al. 2020). These works tend to ignore the role of leadership. This differs from the historiography of the Reformation, which places much emphasis on the role played by Martin Luther. In this telling, Luther’s travels, relentless letter-writing, and his influence on Wittenberg students who returned to their hometowns after following his lectures were key to spreading his ideas across the Holy Roman Empire. His success is all the more surprising considering that his home base was the small town of Wittenberg, “on the edge of civilization”, in Luther’s words. Were Luther and his network of contacts and students indeed key to the reformers’ successful toppling of the monopoly of the Catholic Church?

Intuitively, leadership can make an enormous contribution to the spread of new ideological movements. An extensive literature on social diffusion explores the role of opinion leaders, or ‘influencers’, on the spread and adoption of innovations (Rogers 2003, Valente 1996, Watts and Dodds 2007). Via the information they pass on and the influence they exercise, opinion leaders generate positive externalities: their actions increase the odds of adoption by others.

In our recent work (Becker et al. 2020), we analyse Martin Luther’s role in spreading the early Reformation (pre-1530). We reconstruct Luther’s influence network to examine whether his local connections increased the odds of adopting Protestantism. We conceive of the process as leader-to-follower originating with Luther and flowing to local elites through personal ties. Luther played the role of a global opinion leader based in Wittenberg. He had ties with local elites in towns across Central Europe, who, in turn, exerted influence in their towns. Put simply, our argument is that social influence flowed from a central opinion leader through social ties to cities that were potential adopters: Luther → local elites → cities.

We recognise that Luther’s influence would not have been the only factor that influenced adoption, and other diffusion processes were operating. Our argument is that personal/relational diffusion via Luther’s ties combined with spatial/structural diffusion via trade routes to help Protestantism’s early breakthrough from a regional reform movement to a general rebellion against the Roman Catholic Church. Figure 1 illustrates this idea. It depicts a diffusion story of multiplex networks with multiple diffusion processes. Multiplex ties point to how Luther as an opinion leader mobilised his personal network through an ensemble of letters, visits, and student relationships, and also how Luther’s network blends with the spatial network to create complex contagion processes operating at the intersection of information flow and social influence.

Figure 1 Summary of mechanisms of diffusion in the early Reformation 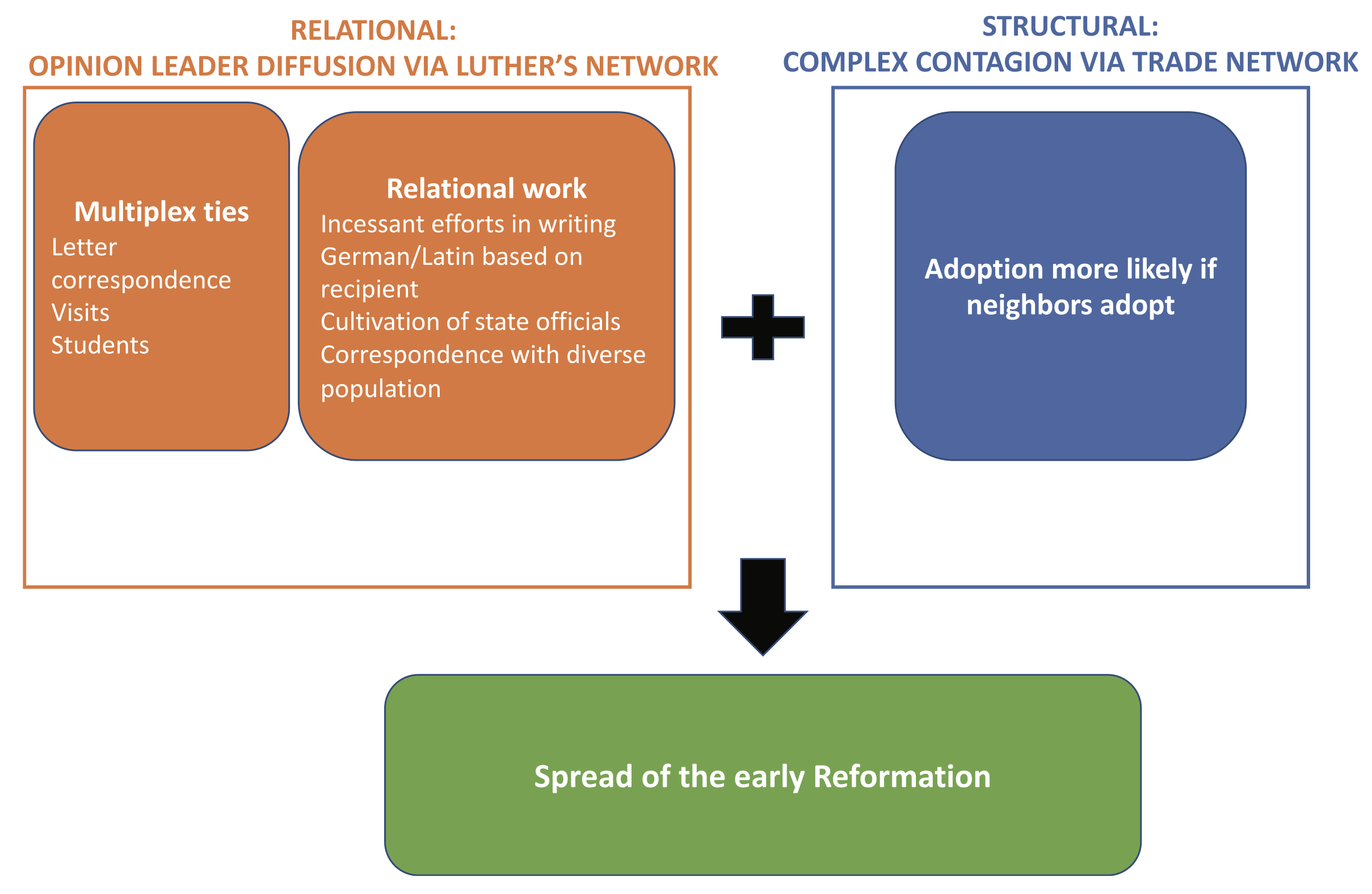 Because diffusion via Luther’s personal network is a different process than spatial diffusion by word-of-mouth or imitation of neighbours, we speak of multiple processes. Luther’s influence was crucial, but the evidence shows that the early Reformation diffused beyond the scope of his personal connections and geographic region. Our theoretical explanation for how the Reformation spread combines Luther’s personal network with a network of on-the-ground relations among cities through which the Reformation’s reach could have expanded as his ideas took root. More generally, we argue that simple diffusion models that flatten networks into uniplex ties are inadequate to explain large-scale social change. Instead, one needs to consider how multiple networks can work in conjunction to propel diffusion.

We collect data on the universe of Luther’s letters, his travels, and all his students at Wittenberg, where he taught. To capture social influence, we restrict our analysis to Luther’s correspondence/visits/ties made prior to 1523, when the Protestant reforms were first formally adopted (Dittmar and Meisenzahl 2020). Focusing on the early period helps isolate Luther’s influence, because prior to 1523 no other influential figure in the Reformation had yet achieved prominence. 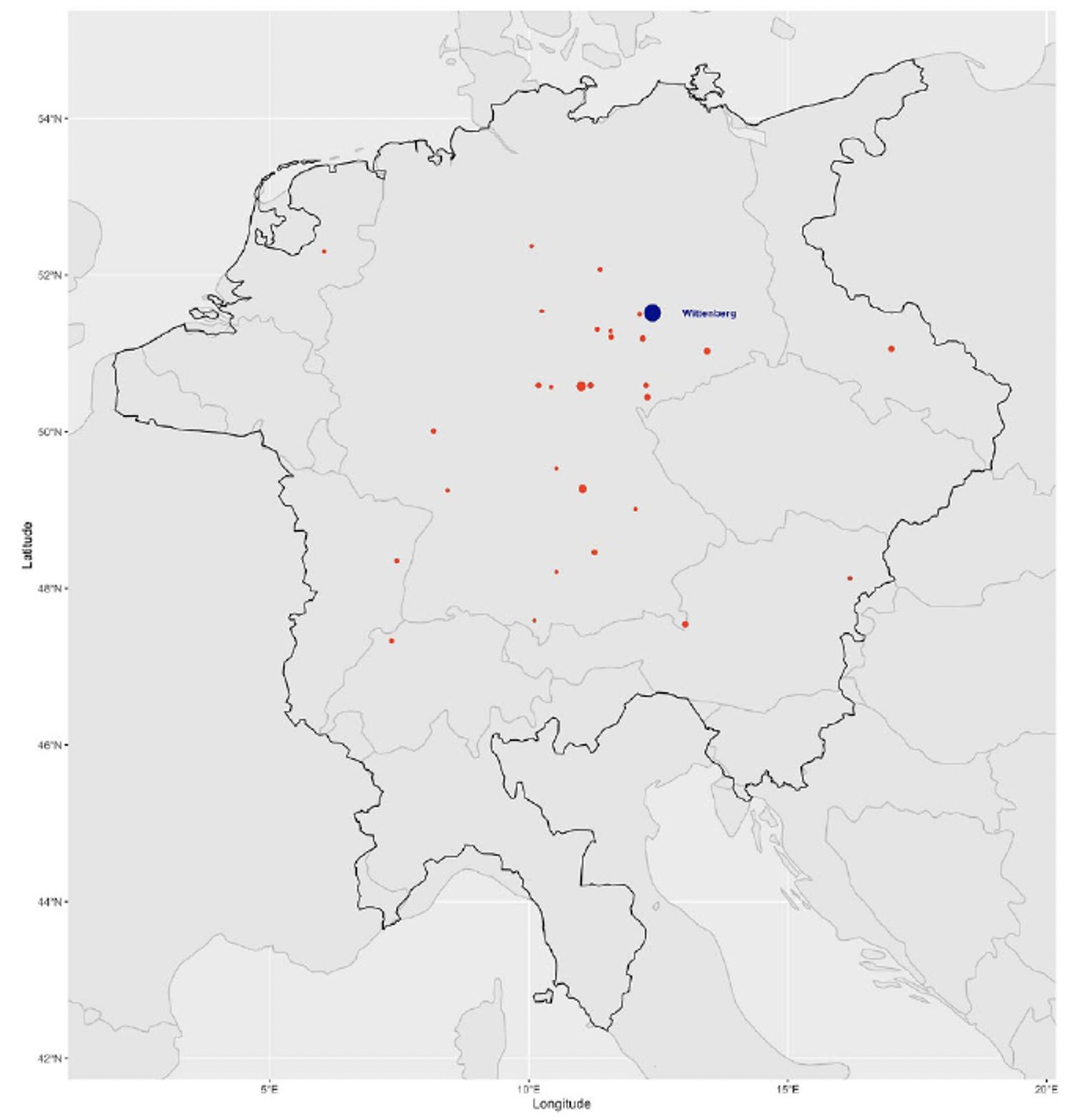 Note: The black outline is the boundary of the HRE in 1548. Dot size corresponds to the number of letters sent by Luther. HRE outline from worldmap.harvard.edu. 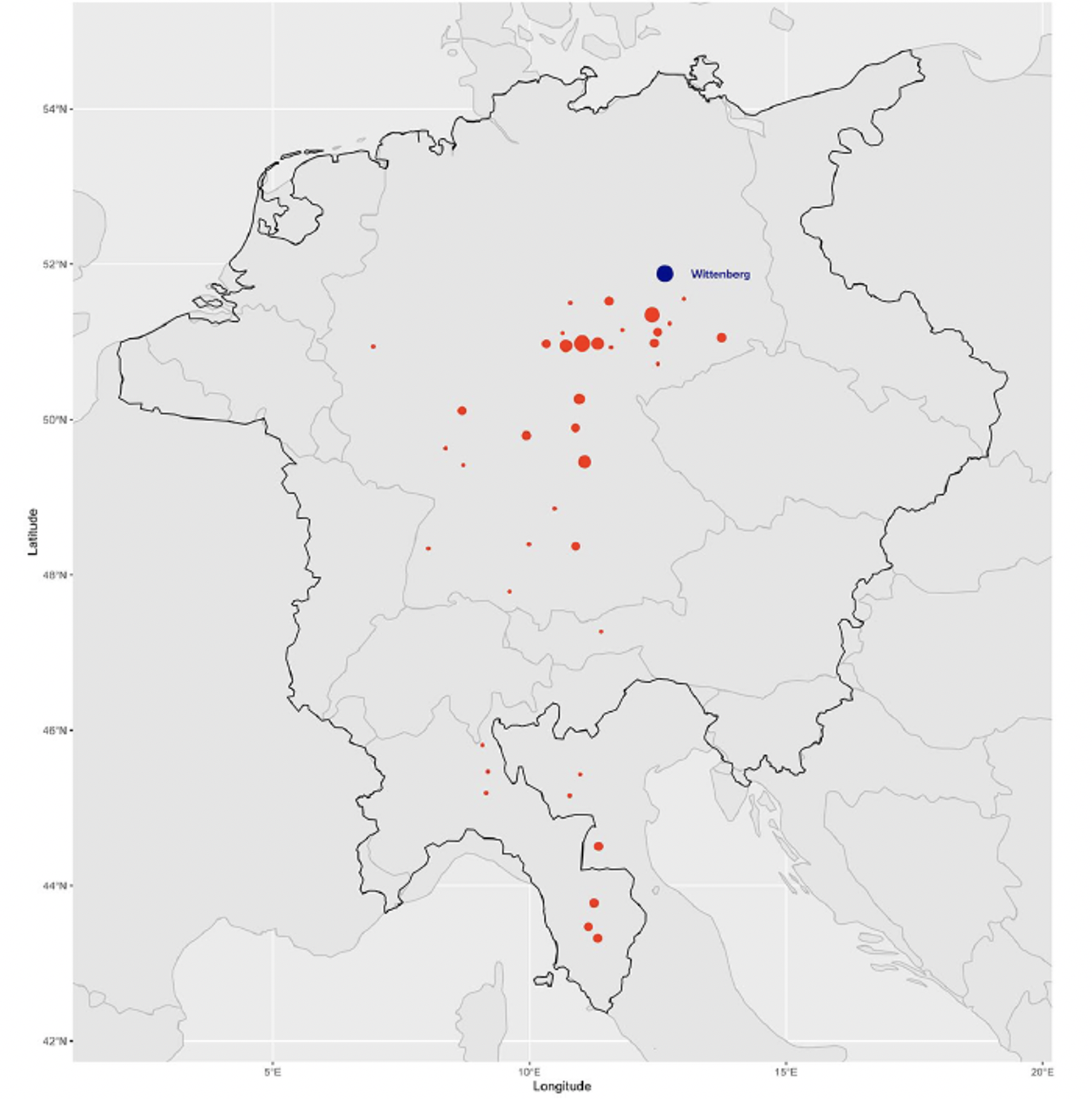 Our starting hypothesis is that the personal influence of Luther upon a city, as proxied by the presence of correspondents, visits, and students, increased the probability that the city adopted the Reformation by 1530. Our regression results, using data on 300 cities in the Holy Roman Empire show that this was indeed the case.

However, the implications of diffusion models of costly behaviour suggest that multiple interpersonal interactions between Luther and local elites in a city would have facilitated the diffusion of the Reformation. This could come through Luther either having multiple correspondences with the same person or having contact with multiple people. We therefore might expect Luther’s influence to have furthered the adoption of Protestantism to the extent that he had had multiple interactions with people in a town. Again, our regressions show support for this hypothesis.

Additionally, ideas spread virally, through contact between individuals. In early modern Europe, the flow of people, goods, and information occurred chiefly through channels of trade, making merchants diffusion vectors (Wurpts et al. 2018). We would expect cities that adopted Protestantism to influence adjacent others via trade routes and thereby contribute to the spatial diffusion of the Reformation. Again, our empirical analysis gives support to the spatial diffusion hypothesis.

Finally, Luther’s influence networks and spatial diffusion may be complementary mechanisms. Let us draw an analogy to the spread of an extensive fire. Forest fires of the kind that have ravaged the American West and Australia do not require some trees to be more influential than are others. Fires spread because trees are proximate to other burning trees (Biggs 2005). Nevertheless, special conditions can accelerate the spread of the fire. For instance, winds pick up sparks and distribute them far from the edge of the blaze, setting off new fires when the embers fall on dry woods.

The diffusion of innovations may be similar. Luther’s influence spread outward from Wittenberg across the region of Electoral Saxony, but it also cast sparks across Central Europe, stirring local elites to set fire to the Roman Church. Our model of social influence is consistent with a complementary process whereby Luther converted cities that did not adjoin Wittenberg through direct social influence, which, in turn, further spread the Reformation by seeding clusters of adoption that could trigger subsequent diffusion. The success of the early Reformation may thus have relied on a combination of the dispersion of Luther’s personal influence through personal network ties and spatial diffusion via trade routes.

We use network simulations to test whether either Luther’s personal network alone, or spatial diffusion alone can explain the adoption of the Reformation by 1530. Our results show that diffusion of the early Reformation appears to have been a combined process of two mechanisms. First, Luther infected a certain proportion of the cities in which he had influence, often far from Wittenberg, which then adopted the Reformation. Because of their spatial relation to uninfected cities, these adopted cities created local social reinforcement that persuaded further cities to adopt, even if they were not directly under Luther’s influence. Moreover, Luther’s personal influence affected cities that were connected to one another, imitating the cluster activation that is necessary for further diffusion to spread via space (Centola 2018). The result was a wildfire effect that raised the number of adopted cities. It appears that the interaction of multiplex networks (trade routes and Luther) via multiple diffusion processes jointly facilitated the spread of the early Reformation.

Generally, studies of social contagion have relied on a single type of tie and a single type of diffusion mechanism. However, such a framework is insufficient in our case. Neither Luther’s personal network nor the trade network was enough to explain the spread of the early Reformation. Luther’s infectiousness made the diffusion process via his personal network different from the diffusion process via trade routes, and it is the interdependent combination of both that appears to have made the early Reformation successful. Our study points to how empirical research on diffusion might benefit from a synthetic model that jointly considers multiplex ties, multiple diffusion processes, and highly contagious agents.

Although we apply our theory to the Reformation, we believe it has implications further afield, e.g. for understanding political campaigning (Selb and Munzert 2018) and for understanding large-scale social change, especially when adoption is risky. As recent work on networks in the social sciences suggest (Jackson et al. 2015), our approach is potentially useful for the study of diffusion of other social and political movements around the world, past and present.