The Wall Street Journal provides a recap of how the workforce has changed as a result of Covid. Even though this week’s jobless claim figures were better than expected and unemployment has fallen to 6.9%, nearly half of its recent peak, those figures mask underlying erosion in employment. Headline unemployment is calculated based on the number actively seeking work. As the subhead to the Journal story explains, “Nearly four million Americans have stopped working or looking for jobs.” It adds:

The labor-force participation rate, or the share of Americans 16 years and over working or seeking work, was 61.7% in October, down from 63.4% in February. Though up from April’s trough, that is near its lowest since the 1970s, when far fewer women were in the workforce.

The supply of workers and their productivity are the building blocks of economic growth. A smaller labor force leaves fewer workers to build machines and clean tables, restraining the economy’s long-term prospects.

The Journal further describes that women and those over 55 have taken the biggest hits, and decline results from three sometimes overlapping factors. First, business closures/job reductions are skewed toward fields where women are over-represented, like retail, hospitality, and personal services. Second, many prime age women have had to stop working to care for children due to school closures. Third, older workers typically often it difficult to land a job again if they lose one in a recession. Again from the Journal: 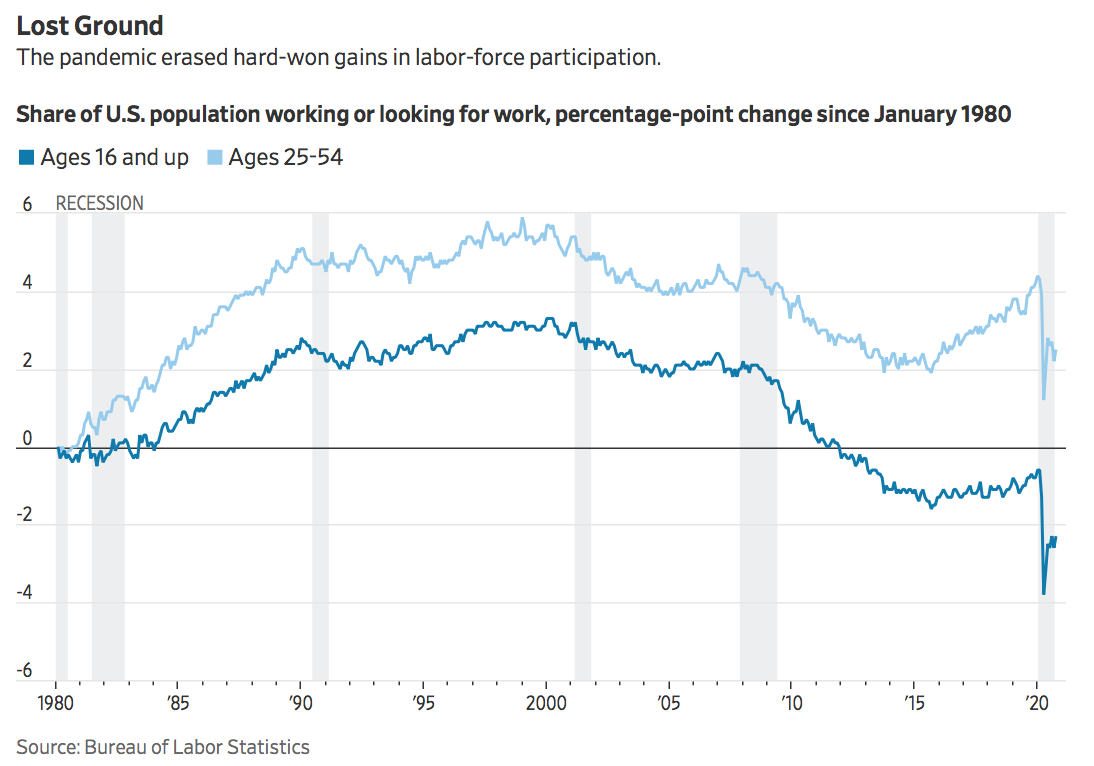 For those of you old enough to remember, the 1980-1981 downturn was ugly, the worst since the Great Depression, and the economy had been limping for the past six-seven previous years due to stagflation. Weaker labor protection almost certainly plays a big role in lower levels of employment among over-55 year old workers, particularly given that older people are generally more robust than then. Individuals in union jobs would not have to retire until they were ready to, and seniority-based pay scales would encourage them to work until 60 or later. Union contracts were de facto standard setters, including for white collar jobs. It would have been unusual back then for a solid employee to be pushed out before retirement age unless a business was in trouble.

Keep in mind that this picture of Covid job losses is very different from the job loss pattern after the Financial Crisis, where men suffered due to the loss of construction jobs. From the Economic Policy Institute in 2014:

While many strides have been made in the women’s equality movement, job growth among women and men in the aftermath of the Great Recession is not one. The solid lines in the figure below show job loss during and after the Great Recession by gender. Men lost far more jobs than women did in the Great Recession—over 6.0 million jobs, or 8.5 percent of their total December 2007 employment, compared to women who lost 2.7 million jobs, or 3.5 percent. Since the economy started regaining jobs, however, the gender dynamic in job growth has reversed—between February 2010 and the June 2014, men gained 5.5 million while women gained 3.6 million jobs.

How did men both lose and then gain more jobs than women? A lot can be explained by the industries men and women were in at the time of the Great Recession—men were in industries that would sustain the most dramatic job loss while women were concentrated in industries with less job loss. The industries with the largest overall job losses—manufacturing and construction—also employed a very large share of men. Meanwhile, the industries that employed the greatest shares of women in 2007—health care and state and local government—were not as hard-hit. However, men have gained more jobs than women because they’ve had stronger job growth within almost every industry. Women experienced a smaller share of net gains between 2007 and 2014 in 10 out of the 16 major industries: manufacturing, whole sale trade, retail trade, professional and business and health care to name a few.

Economists hope that the afflicted sectors will bounce back this time too and women will show disproportionate job gains. But one broad area is likely to be slow to recover: business travel. Big companies have discovered what a time and money sink a lot of it is. Boondoggles like the conference business and in-person training sessions may never go back to the old normal. The Journal notes:

Nonetheless, some economists see three reasons the pandemic’s depressing effect on the labor force could linger. First, it appears to have sped up some baby boomers’ decision to retire, shrinking the number of productive workers in the economy prematurely. Second, it is forcing some parents of young children, in particular women, to reduce their hours or stop working altogether, which could make a comeback harder. Third, it is falling particularly heavily on workers with less education and skills. These workers often struggle to find well-paying work and many drop out of the workforce…

This recession appears to be speeding up retirements. In the third quarter of this year, about 3.2 million more baby boomers said they were out of the labor force due to retirement than in the same period a year earlier, according to Pew Research. From 2011 through 2019, the number of retired baby boomers rose at a rate of about two million annually.

Labor-force participation among workers aged 55 and over logged in at 38.7% in October, down from 40.3% in February…

Unlike previous recessions, this one is making it especially difficult for parents, women in particular, to work because of school closures and the loss of child care. Participation has fallen much more for prime-age women than men, and even more among those who are parents. Among mothers in this group with children under 13 years old, it plunged 3.4 percentage points between February and October, while dropping 1.4 for prime-age fathers, according to analysis by economists from the Federal Reserve Bank of Dallas. That compares with a 1.2 percentage-point decline among prime-age adults without younger children.

Some seven million adults said they weren’t working because they were home caring for children who weren’t in school or day care, according to recent U.S. Census survey data conducted in late October and early November, up from around six million in May. (Pre-pandemic data isn’t available.)

It’s not as if these two groups, women and near-retirees, are the only ones hurting. Restaurants and bars skew to younger workers by virtue of having most employees on their feet all day. But proportionately, other groups so far have recovered more lost ground than these two. And like it or not, the US is effectively betting on vaccines as its way out of Covid. That means probable business restrictions, including shelters at home, as infections rise above the point where hospitals can manage them, and after that, a wobbly recovery unless and until the vaccines prove their safety and efficacy sufficiently in the field so that the enough of the public is willing to take them to reduce Covid infections to a tolerably low level.