Forgive me if I take a small victory lap on behalf of our Covid brain trust and Lambert for yet again delivering on the NC aspiration of being early and accurate. The headline above is from a Financial Times story, based on a spate of recent research showing waning efficacy of the Covid 19 vaccines, particularly Pfizer, from a variety of sources: data from Israel, which injected most of its population early, in January and February, with the Pfizer vaccine; a Mayo study, which showed falling efficacy for all vaccines, particularly Pfizer, which it found at 42% (Moderna holds by contrast at 76% over the same time period), a new Oxford report, and a study from Qatar.

The MSM finally starting to acknowledge that the vaccines are not all that they were cracked up to be came about largely due to foreign sources (doing a better job of tracking Covid cases than the US, a very low bar to beat) and one large US institution beyond reproach posting what has largely been missing from the CDC: actual pretty to very reliable findings. The fault isn’t simply that of the fragmented US public health care system. The CDC has not gone on the road to try to help/prod state public health officials. It hasn’t staffed up to fix VAERS. And the CDC has gone to some lengths to corrupt fact-gathering, most notably by saying it would not track breakthrough cases among the vaccinated as part of its May “Mission accomplished” chest thumping. And the CDC has engaged in dishonest PR by telling Americans that the vaccines would prevent Covid infection.

Mind you, in polarized, attention-deficit-disorder afflicted America, not being all in with vaccine cheerleading is a dangerous editorial position. Merely pointing out that the vaccines were overhyped was seen as being against them. So we’ve had to be more careful than we’d like in providing what we thought were early and important indicators that things were not well in vaccine-land. One was the number of breakthrough cases that IM Doc and his MD professional network (large by virtue of their participation in regular Grand Rounds and other sessions) when conventional wisdom was that that was impossible. And as time went on, IM Doc was seeing the breakthrough cases presenting as sicker and was also seeing and getting reports of breakthrough cases winding up in the hospital. From a mid-July e-mail:

To put it mildly, they are seeing a huge increase in hospitalizations in the Dallas area this week….A nurse XXX Hospital – deep in the heart of Dallas’ African American community – reported to me today that the hospital was full – certainly not with just Covid but there were many many COVID patients – starting to show up in just the past week or so – and she would guess 40-50% are vaccinated. She works on the COVID unit. She also reported to me that multiple nurses (as in critical numbers for staffing levels) have just up and quit this week – confirming my worst fears of the potential with our entire system. I fear that the front line nurses can see the approaching flood more clearly than anyone. They are paying her to work extra shifts up to 120 dollars an hour….

There are now press reports in Dallas stating that every admitted patient is unvaccinated. Who am I going to believe – my trusted colleagues who have just stated to me otherwise tonight? Or the media which has lied again and again and again? It really is a bad feeling as an American to be living under Pravda.

The next day, in a different hospital, when confronted with showing confirmed Covid cases in the area running nearly 57% vaccinated, one doctor went into meltdown, saying something pretty close to:

It is completely obvious to anyone with a brain that these people are liars – these supposedly “vaccinated” people never got vaccinated- it is that simple – they are lying – THE NUMBERS IN THE RESEARCH ARE JUST TOO OVERWHELMINGLY POSITIVE. We are surrounded by liars.

Within a month, he and 6 family members, all fully vaccinated, came down with Covid.

Along with IM Doc’s on the ground sightings, GM was relentlessly watching data. He had predicted in April, which was confirmed by Moderna data in May, “So basically protection against those two variants {P.1 and B.1.351] is gone after 6-8 months if you have been vaccinated against the original strain.”. And they have proven to be more vaccine-tractable than Delta.

Recall that GM was also alarmed at the rapid rise in cases in the Seychelles, which opened up after it hit a 63% vaccination level and immediately saw a spike in cases. GM also caught this snippet in early July:

The latest Israel reports show vaccine efficacy against severe Covid for the >65 year olds vaccinated first to be down to 54%: 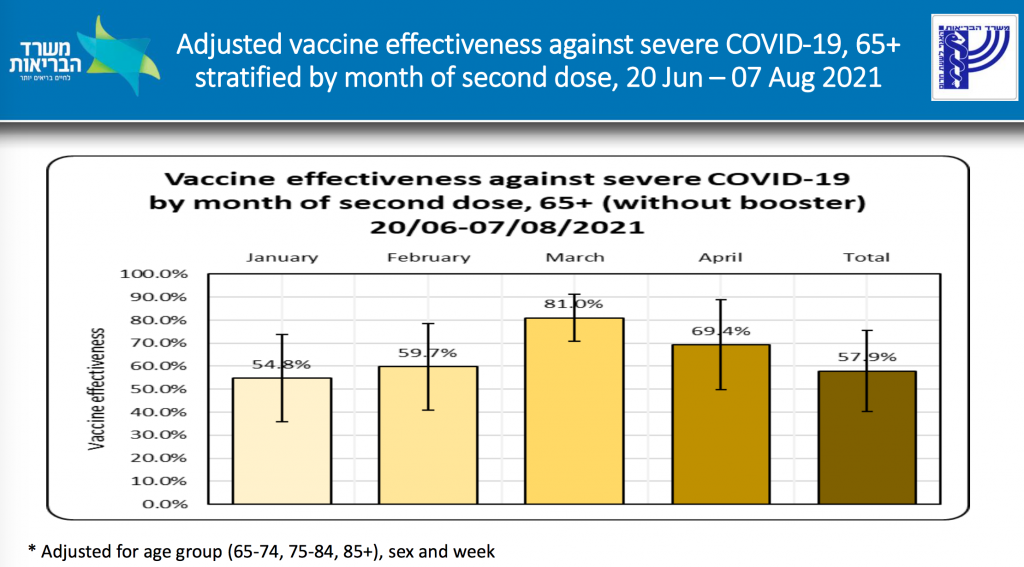 The Financial Times article also discusses another topic we’ve dared to broach: that the vaccines have not proven to be terribly effective in preventing the spread of the highly contagious Delta. Ys the officialdom is doubling down on at best marginally effective vaccinations rather than promoting cheap tests and quarantines.

For convenience, we’ll repeat an extract from Charles Ferguson’s newsletter that we showcased in Links yesterday:

Case growth in high vaccination areas. Most national media coverage and government statements have portrayed the Delta surge in both cases and hospitalizations as primarily driven by states with low vaccination rates and/or anti-masking laws, implying that states with higher vaccination rates and/or stronger regulation are being spared. This is flatly false. Over the last month, the state with the highest growth rate in new covid cases in the entire U.S. is Vermont, which also has the highest vaccination rate of any U.S. state. Covid cases in Vermont grew nearly a factor of ten in the last month (from a seven day average of 10 cases on July 12 to a seven day average of 95 on August 12 – and 126 new cases on August 12 alone). Over just the last two weeks ending August 12, high vaccination states with higher covid case growth rates than Texas and Florida include not only Vermont (263% growth in the last two weeks) but also Hawaii (176% growth over the last two weeks), Oregon (144%), Washington state (146%), New York (108%), and Washington DC (158%), versus Texas with 72% growth in covid cases over the two weeks ending August 12, and Florida with only 50% growth. California is slightly behind Florida with 48% growth.

Furthermore, high-vaccination states are also experiencing high growth in hospitalizations. The seven day average for hospitalizations over the two weeks have increased 425% in Vermont, 140% in Hawaii, 70% in Washington state, and 128% in Oregon. This is not to say that vaccination rates and masking policy are unimportant. Without question, the policies of Florida, Texas, and other “resistant” states have worsened their problems…

The Financial Times article is very much worth reading in full.1 Key sections:

A rise in vaccinated people becoming infected with coronavirus has cast doubt over the lasting efficacy of Covid-19 vaccines, according to new studies, including one that found protection gained from the BioNTech/Pfizer shot declined more rapidly than that from the AstraZeneca jab.

An Oxford university study published on Thursday found that the efficacy of the Pfizer vaccine against symptomatic infection almost halved after four months, and that vaccinated people infected with the more infectious Delta variant had as high viral loads as the unvaccinated.

Two research papers from the US and Qatar have also fuelled debate over the need for top-up booster shots as they found higher numbers of “breakthrough infections” than anticipated, even though protection against serious cases of the virus appears to hold. 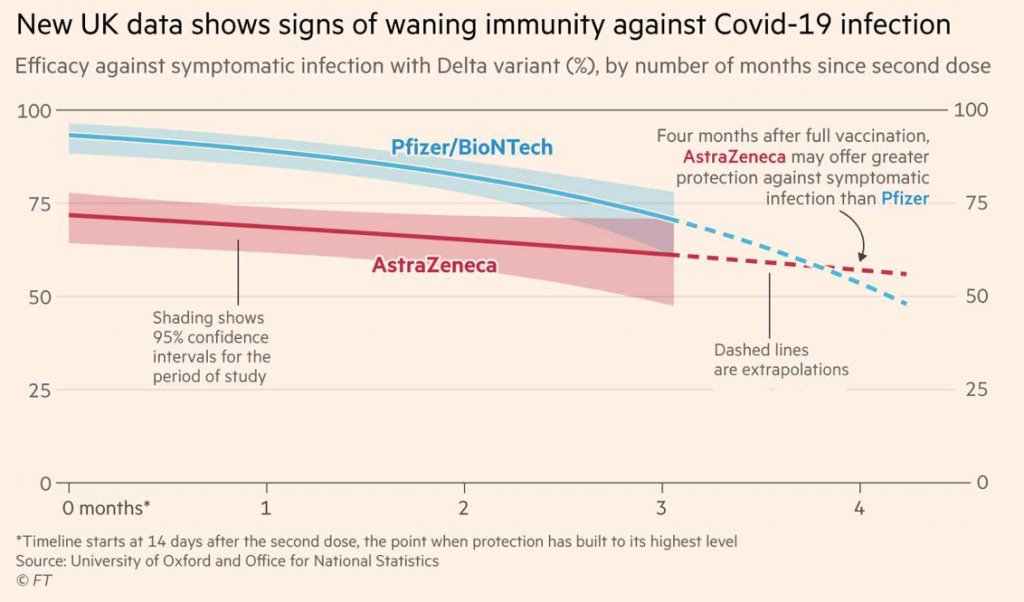 A preprint based on evidence collected at the Mayo Clinic hospital chain in the US state of Minnesota showed protection against infection fell from 91 per cent to 76 per cent between February and July for the vaccine made by Moderna, and from 89 per cent to 42 per cent for the Pfizer jab….2

Interestingly, the Financial Times acted as if a third shot might not be the way to go since UK health officials are still weighing the issue:

Pfizer has said for some time that a third shot would be necessary, probably about eight to 10 months after the second dose. It has applied to several regulators for approval for a booster shot.

Adam Finn, a member of the UK’s joint committee on vaccination and immunisation, said there was “no clear evidence” of the need for a booster and urged caution, especially when some companies had a “strong financial incentive to propose boosting”.

Perhaps they’ve looked at Moderna data on a third shot, which GM reviewed months ago. His bottom like (supported by earlier tech-speak): “The booster only upped the neutralization activity against the variant to half of what the levels were against the original strain.” And again, these were against easier-to-thwart variants that Delta.3

For the bioscience-literate among you, Igancio added:

It [the article[ points out most of the uncertainties on vaccine efficacy due to the timing and speed of Ab waning, the different behavior of the Delta variant and differences in vulnerabilities between age cohorts. It also mentions, though only by passing, the possible differences in the complexity of the immune response with different vaccines which in my opinion, and I have said this repeatedly, is now the most important feature of the vaccines with the dominating Delta strain. When you have a virus that replicates much faster than previous variants the importance of NAb levels might be lower, with viruses outnumbering NAbs by much. Then, non-neutralizing Abs that trigger NK activity and others might have a more important role in protection as well as nursing better Memory B cells.

A hugh research effort is needed to do detailed immunological profiles of infected people (and uninfected vaccinated) at various times after shots, compare profiles with disease outcomes and identify the factors that provide better protection. This would provide orientation for decisions on 3rd shots and might save the life of many.

As you can imagine, no such research effort will occur in the US. If we are very very lucky, the UK might take a stab and we will piggy back on it.

So the US gearing up for a third shot of the current mRNA vaccines against Delta looks an awful lot like “If the only tool you have is a hammer, every problem looks like a nail.” And the really sorry part is our health establishment has other tools that for the most part, they are refusing to use.

1 It appears to have a misconstruction, which is not the reporter’s fault. A source claimed that the Moderna vaccine had “three times the mRNA” as Pfizer. That sounded simplistic enough to be wrong. From GM:

It’s not exactly the same thing though, so it is hard to compare 30 ug of one vs. 100 ug of the other

The immune response profile, not only NAb levels, is slightly different between Moderna and Pfizer, but there hasn’t been a direct and thorough comparison between them, and it is a pity. (And not only those, what about ChadOx or Novavax). Not everything has to do with NAbs, neither with reactogenicity. How the cellular response is balanced between Thelper 1 or 2 cells and the levels of non neutralizing antibodies might be of outmost importance, specially for delta variant.reactions.

But if NAb levels go higher with Moderna (something I have also read in a systematic review and meta-analysis paper) one can expect longer times for NAb waning and more durable protection.

2 From later in the article:

One complication is that the Pfizer jabs were given first and Moderna’s rollout has been more recent, but the researchers tried to compensate for this by only comparing groups vaccinated in the same month.

3 It’s weird to see the campaign of silence against J&J in the US. As GM pointed out:

In reality J&J is just half of a course of AZ, perhaps a bit more potent. But remember how people were talking about how the first dose gives you most of the protection? Well, it was indeed true, but it no longer is after the appearance of B.1.617.2