In May 2021, Fifa began exploring the idea of holding a men’s football World Cup every two years instead of four. Further plans have since been unveiled, and the proposal, which originally came from Saudi Arabia, has received support from some international organisations.

Fifa’s chief of global football development and former Arsenal manager Arsène Wenger says he is “100% convinced” it is the right way forward for the sport.

Others, including fan groups, have quickly called foul on the proposal. Uefa, responsible for governing football in Europe, has threatened a boycott, with its president Aleksander Ceferin commenting: “We can decide not to play in it … So good luck with a World Cup like that.”

Arguments in favour of the scheme include more frequent quality football entertainment and the chance to raise more funds for player development in poorer countries. Those against complain of a loss of novelty value and the need to look after the health of players.

But like most decisions taken in the world of business, be it banking or sport, this is not just about pros and cons. It is about financial benefits and costs.

For Fifa, the majority of its revenue comes from the broadcasting fees, licensing rights and ticket sales of the men’s World Cup tournament, held every four years since 1930. In fact, there is a clear financial cycle in which losses accrue in three out of every four years. More World Cups could bring in more income.

So why isn’t Uefa keen to do the same? Potentially, the change could lead to it hosting the Euros more frequently (also currently held every four years) and also benefiting from increased revenue.

The main difference is that Uefa simply is not as financially dependent on a single event. Instead, it has something Fifa does not have: more than one major event that generates money. These include the Champions League (men’s and women’s) and Europa League competitions.

As a result, Uefa makes much more money than Fifa does. Over the last four years, UEFA’s revenues, at US$12.5 billion (£9.4 billion), were almost double those of Fifa, which brought in US$6.4 billion (£4.6 billion). 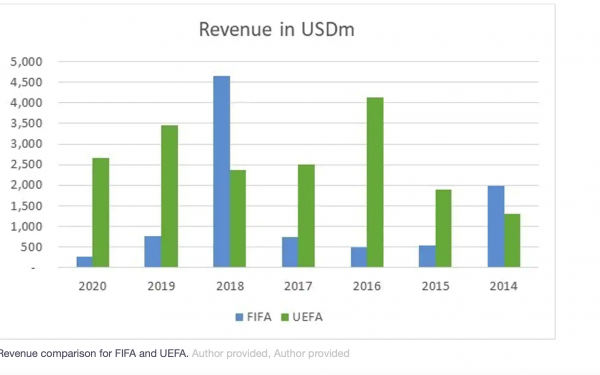 It is also a much smoother revenue year-on-year, whereas Fifa is more dependent on a large boost every four years. Clearly, Fifa needs the men’s World Cup more than Uefa needs the Euros.

In fact, the majority of Uefa’s annual revenue comes from club competitions, which they would not be keen to disrupt. In 2016, (Euro 2020 figures are not yet available) Uefa generated €293 million (£249 million) more from club competitions that year than it did from the international tournament.

So for Uefa, as well as for the European clubs that play in those club competitions, maintaining those revenues is more important from a financial standpoint. Both Uefa and Fifa are, after all, governing bodies looking after their members’ needs – and plans for development and growth of the game at all levels costs money. 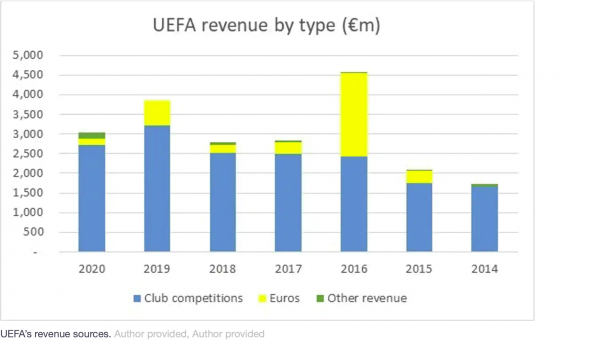 As for the clubs, there are potentially serious costs of making their players available for more international duty, such as the risks of player fatigue and injury. Large clubs are more likely to have a number of national team players and therefore more likely to face greater overall risk to their squad. Smaller clubs may have a national player as their star performer.

Currently Fifa’s largest outgoing – about US$500 million (£362 million) a year – is on what it terms “development and education”. It sounds like a laudable aim, and few would argue against Wenger’s aim to “provide an incentive to invest in youth programmes”.

But it is worth thinking seriously about where extra funds would come from. Doubling the number of World Cups does not necessarily mean double the money.

Income is generated from a number of sources, and in the last World Cup year (2018), TV broadcast rights made up the largest (55%) source of Fifa’s revenue (ticket sales made up only 15%).

But what broadcasters pay for rights depends on demand from the prospective audience. The more people want to watch something, the more they are willing to pay to outbid their competitors.

Making a major event less rare (and therefore perhaps less major), by having it occur twice as often, and clashing with other sporting events that people want to watch (such as the Olympics) can easily dilute value to broadcasters, making them less willing to pay.

This is the gamble. With more events but potentially less money per event, will the overall effect be a positive one for Fifa’s income? And is any extra money worth risking the wrath of Uefa, some of the world’s biggest clubs, and crucially, the fans?