The layoffs in the tech and social media bubble are quickly getting absorbed by other companies, including in other industries, while the number of layoffs and discharges across all industries are near historic lows, and applications for unemployment insurance remain near historic lows. Wages have continued to surge; and for job hoppers, wages have exploded as desperate companies are willing to pay to fill slots, amid a gigantic pile of job openings and massive job hopping as workers are arbitraging the tighter labor market for their benefit.

And today, we got more of the same with the jobs report from the Bureau of Labor Statistics. The labor force – people who either have jobs or are actively looking for jobs – is still the key problem: It dipped further and remains far below pre-pandemic trend. This is the supply of labor.

Powell, in his speech two days ago, focused on the labor force. He pointed out that the Fed cannot increase the supply of labor, and the Fed cannot increase the labor force; but the Fed can tamp down on the demand for labor, to bring supply and demand somewhat in line in order to tamp down on the inflationary pressures that occur when companies are passing on their surging labor costs by increasing prices. This is particularly an issue with services where raging inflation has now taken hold. And in many services, labor costs are a huge factor.

And this is now happening everywhere: Companies that provide services are passing on their surging labor costs by jacking up their prices.

But it’s not working yet. Consumer demand is not landing, and the labor market isn’t landing either. And inflationary pressures persist, particularly in “core services” where labor costs are a huge factor.

The labor force is not recovering back to trend.

The labor force – people who either have jobs or are actively looking for jobs – fell by 186,000 people in November, the third month in a row of declines, to 164.5 million, which is roughly back where it had been before the pandemic, but it remains stunningly far below pre-pandemic trend.

In other words, the labor force, after growing for decades, stopped growing once it bounced back from the pandemic lows.

In his speech two days ago, Powell pointed out that there is a “shortfall” of about 3.5 million people in the labor force, compared to pre-pandemic trends, citing data from the Congressional Budget Office and the BLS. And I’m getting about the same thing, based on BLS data and my own calculations: a “shortfall” between 3.5 million and 4 million: 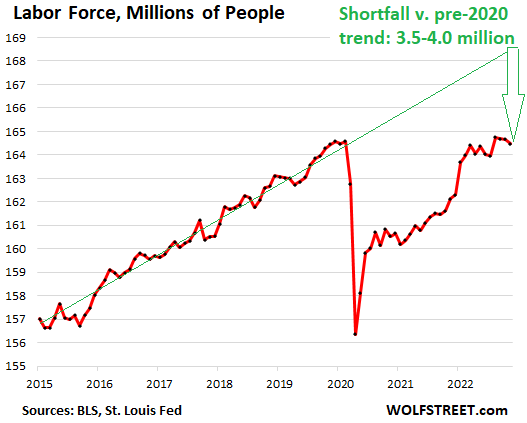 Where does this shortfall come from?

The labor force participation rate – the labor force as a percent of the working-age population 16 years and older – dipped for the third month in a row to 62.1%. It has gone backwards this year: 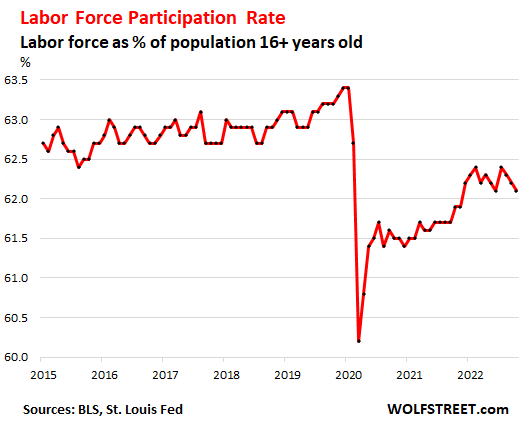 This shows that the biggest issue in the labor force is not the “prime working age” segment of the population, but the over-54 segment: 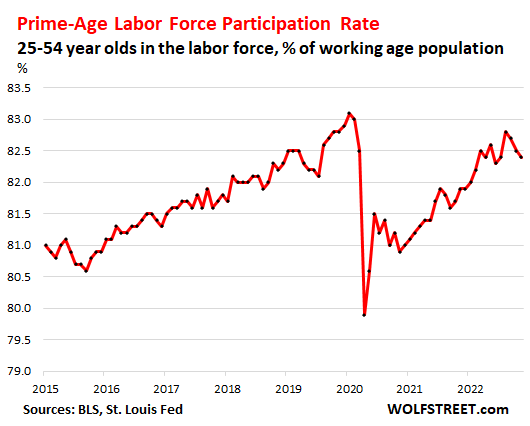 Powell on why the “shortfall” in the labor force.

In his speech, Powell discussed two categories of reasons responsible for most of this “shortfall” of about 3.5 million people in the labor force: excess retirements and slower growth in the working-age population.

What might have caused these excess retirements, according to Powell:

And they’re not coming out of retirement, according to Powell:

Slower growth of the working-age population: 1.5 million of the 3.5-million shortfall in the labor force. “The combination of a plunge in net immigration and a surge in deaths during the pandemic probably accounts for about 1.5 million missing workers,” he said.

The Fed cannot increase the labor force, but it can reduce demand for labor.

The Fed’s tools “work principally on demand,” Powell said. It’s not up to the Fed to increase the supply of labor, he said. But it can reduce the demand for labor.

And we knew that: Higher interest rates make credit-funded consumption and investments by consumers and businesses more expensive, and they are dialed back, removing some demand for labor. The decline in asset prices increases uncertainty among businesses, and new projects are being dialed back, etc., which further decreases demand for labor.

“For the near term, a moderation of labor demand growth will be required to restore balance to the labor market,” he said. This was very hawkish.

And it became even more hawkish in light of today’s jobs data. So higher interest rates and more QT, because those are the tools the Fed has to tamp down on demand for labor, which would tamp down on surging labor costs that companies are passing on to consumers via higher prices.

But demand for labor didn’t cool: Aggressive hiring pulled people out of self-employment. 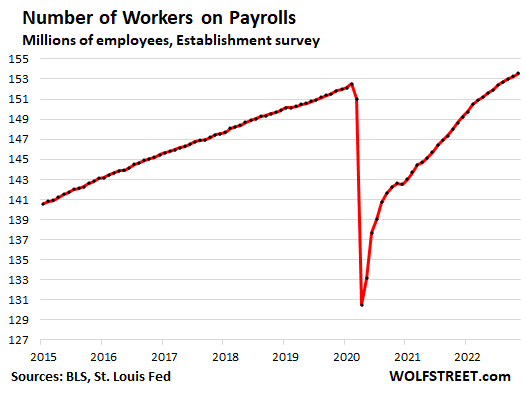 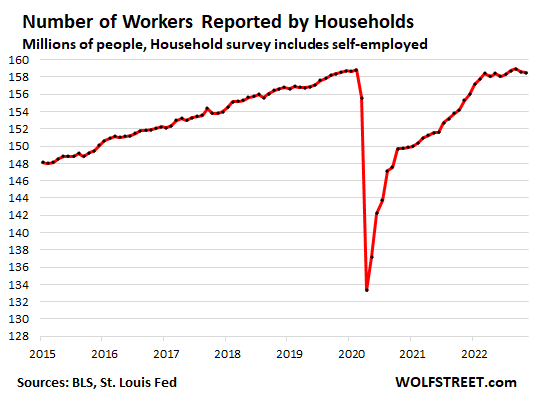 Both of them — payrolls and total number of workers — are also far below pre-pandemic trends.

The stagnation in the total number of people who are working, as reported by the survey of households, and the growth of regular payrolls, as reported by the survey of establishments, shows that employers’ efforts to fill their open positions by offering higher wages and better benefits is drawing the self-employed into the employment realm, while the overall number of working people hasn’t improved at all this year.

This situation where employers struggle to fill jobs – more demand for labor than supply for labor – is a good thing for workers. It has shifted the power balance, and it continues.

But now there is raging inflation, and this inflation is fueled by a complex combination of factors, including vast amounts of money printing, interest rate repression, and stimulus spending to produce the most wildly over-stimulated economy ever, and this money is still circulating out there, and it’s still creating demand for goods, services, and labor. And the Fed is now trying to tamp down on this demand, including the demand for labor, with, as Powell indicated, even higher interest rates, for even longer.