When the SEC filed its civil suit against Goldman, the firm and its stalwarts argued that the firm would come through with its reputation intact.

Anyone who watched Goldman over the last decade had reason to doubt that cheery view. The firm has undergone a remarkable change, from one that was notoriously aggressive but had a keen sense of where the boundaries of propriety lay, to one out to maximize its bottom line with little regard to the long-term consequences. Greed and short-termism won in 1999 when the firm went public. At most times in the preceding 15 years, if not even earlier, Goldman could have gone public or sold itself, producing a nice killing for its current partners. But most saw Goldman as an institution and felt that selling it would be an act of opportunism, of cashing in on what others had built without compensating them fairly.

I would occasionally have dinner with a senior staff member, one in an influential position that put him regularly in front of the CEO and the management committee. He had been with the firm a very long time and had institutional memory, a very scarce commodity. He was always discreet, but his unhappiness with the devolution of the firm was palpable. He did not have much respect for Hank Paulson, but it appeared the other members of the management committee, particularly John Thornton and John Thain, were thoughtful and acutely aware of the tradeoff between short-term profits and maintaining the firm’s franchise. By contrast, after Blankfein took the helm and the management team came to be dominated by traders, I could see him do everything in his power to steer our conversations away from Goldman, even the Goldman of long ago. And it became obvious why: the times we did wind up on that topic, he would be unable to contain his contempt for the people leading the firm, and the damage he was convinced they were doing to the firm’s culture, which he was also certain would play out in its reputation. It has taken a few years for him to be proven correct.

The New York Times chronicles how some of the firm’s corporate clients are increasingly uncomfortable with how Goldman will use the information the firm gains from its business dealings (meaning its corporate finance relationships and underwritings, where the banker is expected to treat its customers as a relationship, not a trade) for its own profit, particularly to bet against the client. This would have been completely unthinkable when I was briefly at Goldman (the early 1980s); Sidney Weinberg would spin in his grave if he could read this story.

The article describes in particular how the firm both represented WaMu as a manager of its mortgage-backed securities offerings, yet shorted its bonds and its stock. Goldman maintains, in effect, that the short wasn’t “personal” but was part of a broader portfolio management strategy. If you believe that, I have a bridge I’d like to sell you.

In that [e-mail] message, Mr. Killinger noted that he had avoided retaining Goldman’s investment bankers in the fall of 2007 because he was concerned about how the firm would use knowledge it gleaned from that relationship. He pointed out that Goldman was “shorting mortgages big time” even while it had been advising Countrywide, a major mortgage lender.

“I don’t trust Goldy on this,” he wrote. “They are smart, but this is swimming with the sharks.”

One of Mr. Killinger’s lieutenants at Washington Mutual felt the same way. “We always need to worry a little about Goldman,” that person wrote in an e-mail message, “because we need them more than they need us and the firm is run by traders.”

Yves here. WaMu is not an isolated case. I have had a former financial firm executive tell me that when Goldman was pitching to manage an offering, its executives asked point blank, “Are you shorting our company?” They did not get a straight answer, which they took to mean, “Yes”.

The article also contends that the firm encourages its staff to ignore conflicts of interest, a charge the firm’s spokesman, Lucas Van Praag, denies:

When new hires begin working at Goldman, they are told to follow 14 principles that outline the firm’s best practices. “Our clients’ interests always come first” is principle No. 1. The 14th principle is: “Integrity and honesty are at the heart of our business.”

But some former insiders, who requested anonymity because of concerns about retribution from the firm, say Goldman has a 15th, unwritten principle that employees openly discuss.

It urges Goldman workers to embrace conflicts and argues that they are evidence of a healthy tension between the firm and its customers. If you are not embracing conflicts, the argument holds, you are not being aggressive enough in generating business.

Yves again. The article alludes to two of the 901 pages of exhibits released by the Senate Permanent Subcommittee on Investigations. I’m puzzled that the web version did not point to them directly; they are a revealing example of Newspeak in action (click to enlarge, or see pages 259-260): 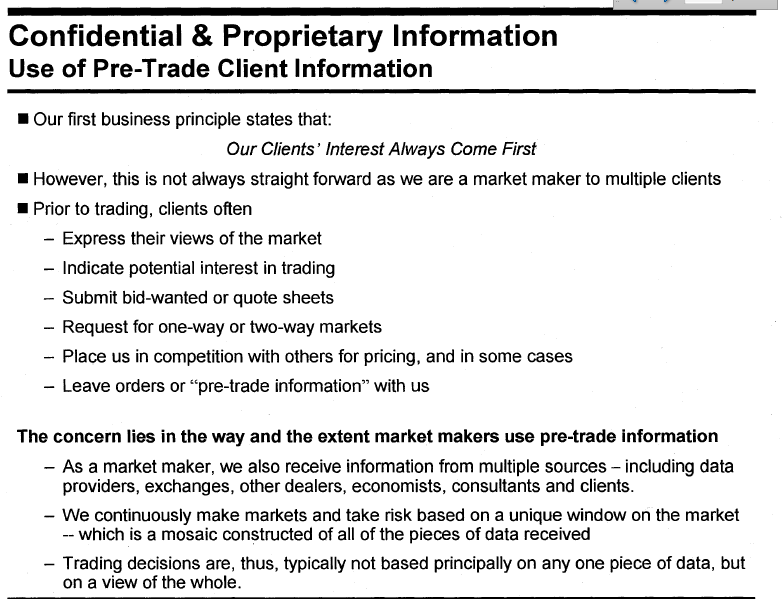 Yves here. Van Praag reportedly contends, “This policy and the excerpt cited from the training manual simply reflects the fact that we have a diverse client base and give our sales people and traders appropriate guidance.”

Ahem. Anyone who has lived in Corporate America will recognize these pages as CYA. One thing Goldman has long-ago mastered is getting its story straight BEFORE it engages in questionable behavior. I saw that first hand when I worked for Goldman in the 1980s. For instance, I once walked into the Syndicate department well after normal hours for that group to find two junior staffers being briefed by one of the most powerful partners from Goldman’s main law firm, Sullivan & Cromwell (i.e., someone who would normally never deal with people so far down the totem pole) walking them through the party line on an upcoming deal. It was an unusual type of underwriting; the head of Syndicate had crowed, “I’m going to make that stock sing!” but that was not the sort of thing you say to the SEC should they happen to come calling.

Similar legalistic positioning in the excerpt is obvious to anyone who has an operating brain cell. The Goldman argument is that trading decisions are not based on “any one piece of data” which seeks to claim that no one piece of information (which of course could come fro a client and hence constitute front running or simply abusing a presumed relationship) would lead to a trade. Huh? Traders often jump to take or lighten a position PRECISELY because they have gotten a SINGLE piece of information which they see as significant and believe the market does not have yet.

The story accounts other examples of less than savory conduct by Goldman. One case involved the auction rate securities market. Goldman refused to to waive a contract provision, as other banks had, after they abandoned the auction rate securities market. The article does not state as clearly as it might that the reason the issuer in question, a hospital, wanted a waiver was because it was paying a penalty rate precisely because Goldman and other firms who had once been willing to act as market makers, were refusing to do so. This is more serious than it might seem because an underwriter is expected to continue to make a market after an issue is sold; this is an important service to investors and issuers. But there is no contractual obligation, even though it is widely regarded as an essential part of the business. Hence the hospital’s outrage when Goldman welshed on its part of the deal but insisted the hospital adhere to its contract.

Another juicy item: Goldman recommended shorting the debt of six states….the same year it had underwritten bonds for those states, which meant it sold them to (presumably) other investors.

The article describes more incidents: how Goldman sold a notoriously toxic CDO, Timberwolf, to a Bear Stearns hedge fund (the one that blew up in July 2007, ushering in the first acute phase of the credit crisis) and then shorted Bear’s stock, and how aggressive collateral calls might have led to the demise of Thornburg Mortgage.

While Goldman is a sufficiently embattled firm these days it is well nigh impossible for outsiders to get candid answers, the firm’s conduct in the Senate hearings and some of Lloyd Blankfein’s star turns give the impression that the firm’s moral compass is so badly broken that its leadership and many of its employees genuinely thinks there is nothing questionable about this type of conduct. And if that is true, the firm is beyond redemption.