I had the pleasure of finally meeting Steve Keen (he and his wife Melina are in New York) and it turns out he is adventuresome eater as well as thinker (he ordered maguro and natto even though I warned him, although I must say this restaurant’s version was actually gaijin friendly).

Steve told me about his presentation at a recent Minsky conference in Boston, and reader Don B had separately just e-mailed me about it. The entire talk is worth reading, and I thought I’d extract a few key parts. 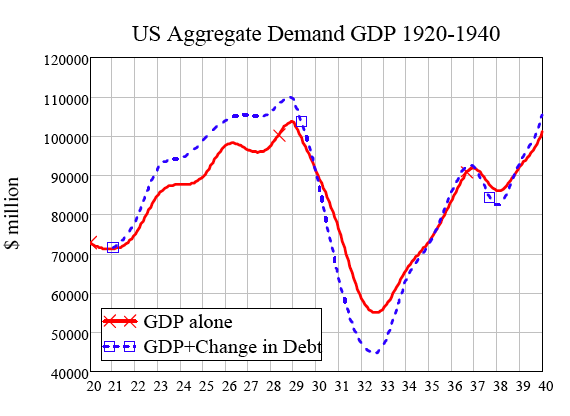 Growth in debt contributed to this definition of aggregate demand in the US to a greater degree in expansion period through 2008 than in the runup to the Great Depression: 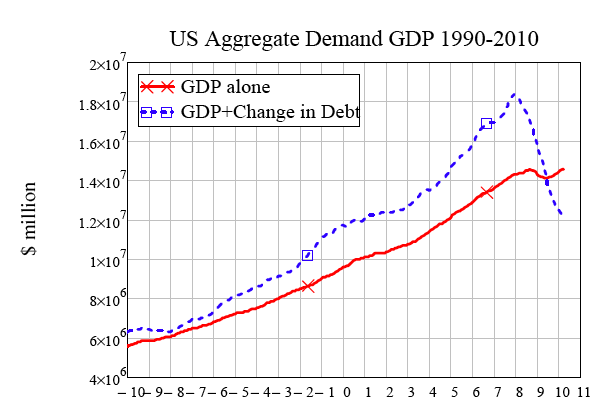 Firstly, the contribution to demand from rising private debt was far greater during the recent boom than during the Roaring Twenties—accounting for over 22% of aggregate demand versus a mere 8.7% in 1928. Secondly, the fall-off in debt-financed demand since the date of Peak Debt has been far sharper now than in the 1930s: in the 2 1/2 years since it began, we have gone from a positive 22% contribution to negative 20%; the comparable figure in 1931 (the equivalent date back then) was minus 12%.5 Thirdly, the rate of decline in debt-financed demand shows no signs of abating: deleveraging appears unlikely to stabilize any time soon.

Finally, the addition of government debt to the picture emphasizes the crucial role that fiscal policy has played in attenuating the decline in private sector demand (reducing the net impact of changing debt to minus 8%), and the speed with which the Government reacted to this crisis, compared to the 1930s. But even with the Government’s contribution, we are still on a similar trajectory to the Great Depression.

What we haven’t yet experienced—at least in a sustained manner—is deflation. That, combined with the enormous fiscal stimulus, may explain why unemployment has stabilized to some degree now despite sustained private sector deleveraging, whereas it rose consistently in the 1930s….

Whether this success can continue is now a moot point: the most recent inflation data suggests that the success of “the logic of the printing press” may be short-lived. The stubborn failure of the “V-shaped recovery” to display itself also reiterates the message of Figure 7: there has not been a sustained recovery in economic growth and unemployment since 1970 without an increase in private debt relative to GDP. For that unlikely revival to occur today, the economy would need to take a productive turn for the better at a time that its debt burden is the greatest it has ever been..

Debt-financed growth is also highly unlikely, since the transference of the bubble from one asset class to another that has been the by-product of the Fed’s too-successful rescues in the past means that all private sectors are now debt-saturated: there is no-one in the private sector left to lend to. 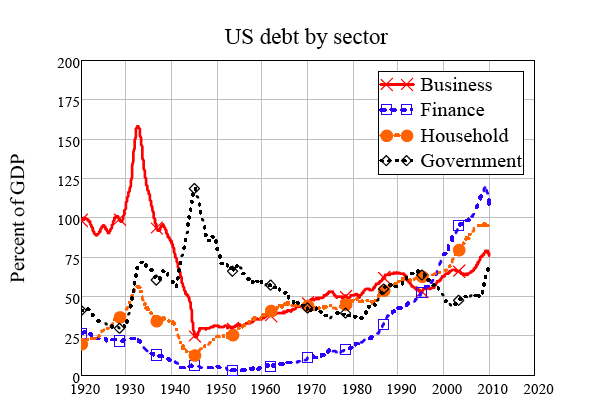 Yves here. Modern monetary theory types will point out that a government with a sovereign currency does not need to borrow to finance its activities, but you can eyeball Keen’s chart and see that private debt to GDP is higher even now than right before the onset of the Depression. Perilous little deleveraging has occurred.

The balance of Keen’s paper describes his Minsky model, which includes Ponzi finance (as in it simulates speculation on asset prices), which makes it unstable once certain debt levels are reached, just as Minsky predicted (and the breakdown level is similar to ones observed empirically).

There is intriguing material in there: comparisons, both in the model and empirically, contrasting a US response to the crisis (rescuing banks) versus Australia’s (shoring up households). And here is one finding:

The final debt-driven collapse, in which both wages and profitability plunge, gives the lie to the neoclassical perception that crises are caused by wages being too high, and the solution to the crisis is to reduce wages.

What their blinkered ignorance of the role of the finance sector obscures is that the essential class conflict in financial capitalism is not between workers and capitalists, but between financial and industrial capital. The rising level of debt directly leads to a falling worker share of GDP, while leaving industrial capital’s share unaffected until the final collapse drives it too into oblivion.