Even so, Morgenson’s story is certain to be an eye-opener to readers fresh to this topic and has important revelations for even those who’ve been on this beat for a while.

The centerpiece of her article is a private equity limited partnership agreement from Carlyle. The Times obtained a copy via FOIA, which was heavily redacted. They also obtained an unredacted copy and compared the two. The comparison was revealing, and not in a good way.

The document contained numerous indefensible, overreaching redactions, such as the name of Carlyle’s attorney (Simpson Thatcher). Oh, and look at the first page of the Table of Contents: 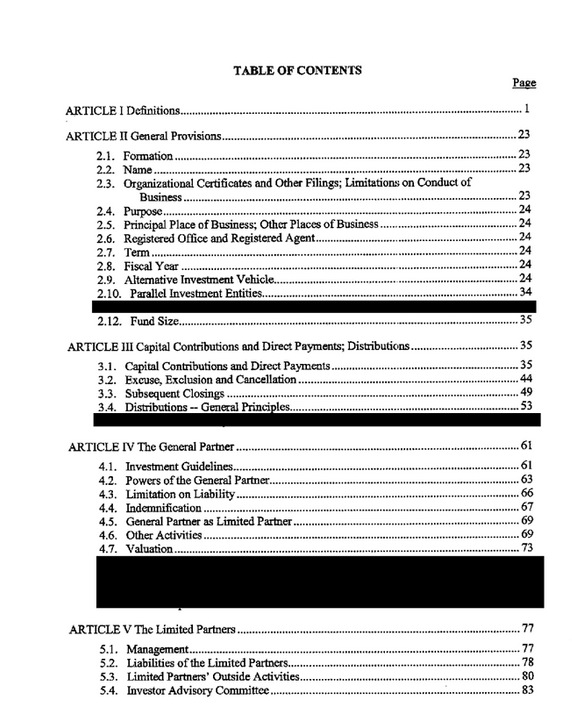 In the page below, pray tell, how is a definition of ERISA in part confidential or a trade secret? Or for that matter, an event of dissolution, which is hardly a cutting-edge concept? 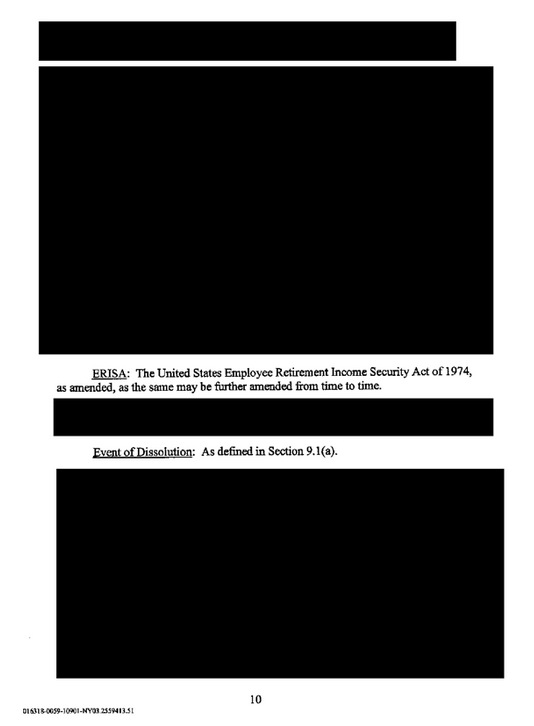 We see even more hard to defend redactions, and we are only up to page 11 of the contract (page 15 of the PDF): 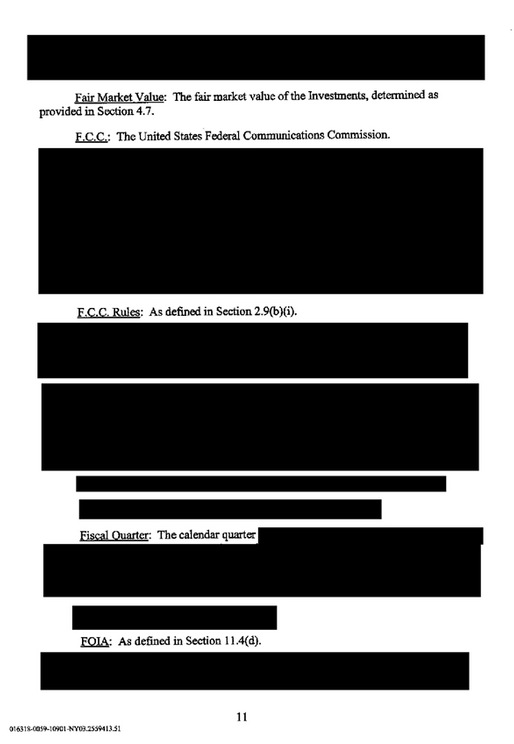 Morgenson does us the favor of having pulled out some substantive omissions. Not surprisingly, they are matters of interest to beneficiaries as well as typically-complicit limited partners. She hones in on one topic we’ve discussed, that of how the tax language in the clawback section undermines how the general public and many investors assume it works. For laypeople, clawback provisions are meant to assure that the private equity fund managers do not receive fees meant to reward good performance when the performance was no good. They require that the fund managers, who are general partners, settle up with the limited partners at the end of the fund’s life and return any overpayment of fees based on profits on sales of companies in the portfolio that are later washed out by losses on dogs that are sold later. She points out that defining that the amount that is subject to clawback be determined on an assumed after-tax basis reduces what the general partner might have to cough up. As we discussed long-form in a September post, in reality, both the tax provisions and industry practice assure clawback payments never take place.

Gretchen Morgenson finds other nasties in the Carlyle document. General partners can shift legal expenses related to fund operations onto fund investors to a much greater degree than managers of mutual funds are allowed to. This isn’t a theoretical issue: Carlyle will be dumping $115 million for settling a price-fixing lawsuit relating to how large funds conspired to suppress the prices of companies they were buying onto investors in Carlyle Partners IV to the extent insurance won’t cover the cost. New York City Comptroller Scott Stringer is unhappy about the charges to pension funds he supervises but can’t do much about it. Other investors, like the Ohio Public Employees Retirement System, was too cowed even to comment. Oh, and CalPERS has $300 million invested in this fund.

The Carlyle agreement obliges limited partners to resist Freedom of Information Act requests (each state has a version of FOIA) even in states like Texas where “all government information is presumed to be available to the public.”

But as as revealing as the Carlyle LPA exegesis was, the real stunner came later in the Morgenson article. By way of background, Christ Church Cathedral of Indianapolis is suing its investment advisor, JP Morgan, for the 37% losses it suffered for being advised to put funds in risky investments, including hedge funds and private equity funds.

Get a load of this:

Christ Church’s private equity foray included a small interest in K.K.R. North America Fund XI, a 2012 offering that raised around $6 billion. K.K.R., the fund’s general partner, can “reduce or eliminate the duties, including fiduciary duties to the fund and the limited partners to which the general partner would otherwise be subject,” the fund’s limited partnership agreement says. Eliminating the general partner’s fiduciary duty to investors in the private equity fund limits remedies available to the church if a breach of fiduciary duty should occur, the church’s lawsuit said.

Kristi Huller, a spokeswoman for K.K.R., initially denied that it could reduce or eliminate its fiduciary duties. But after being presented with an excerpt from the agreement, she acknowledged that its language allowed “a modification of our fiduciary duties.”

Linda L. Pence, a partner at Pence Hensel, a law firm in Indianapolis, represents the church’s endowment in the suit. She said she had been shocked by the secrecy surrounding some of her clients’ investments. “On one hand they say they don’t owe you the duty,” she said, “but everything is so confidential with these investments that without a court order, you don’t have any idea what they’re doing. It’s not open and transparent, and that’s the kind of structure to me that’s ripe for abuse.”

The idea that the general partner can shirk its fiduciary duties is mind-boggling. I checked the KKR limited partnership agreement we obtained, from 2006, and it does not contain this language. So this seems to be agreement creep, that the ever-clever general partners keep slipping more and more egregiously self-serving language into their contracts over time.

I pinged a law professor who is an expert in trust law. His initial reaction was that while both Delaware and Texas allowed for the waiver of fiduciary duties for both partnerships and limited liability companies, he did not see any basis for believing that Federal fiduciary duties under ERISA can be waived. Private pension funds contribute account for about 10% of total investments in private equity. Public pension funds like CalPERS represent over 20% of total pension fund investments, but are not subject to ERISA. However, for the most part, they voluntarily follow its guidelines.

Nevertheless, this section raises a second issue: how could fiduciaries (which pension funds, both public and private) accept this language? They are passive investors in these funds. How can they say they are meeting their duties to their beneficiaries when they can’t act as a fiduciary (by virtue of having no say) and the general partner explicitly shirks that duty?

Finally, Morgenson mentioned our struggle with CalPERS as a example of investors defending the private equity industry rather than the public good:

The Fort Worth pension is not alone in opposing open-records requests for private equity documents. Calpers has also done so…

Earlier this year, Susan Webber, who publishes the Naked Capitalism financial website under the pseudonym Yves Smith, asked Calpers for data on the fund’s private equity returns. After a legal skirmish, Calpers said last week that it had fulfilled her request. But on Friday, Ms. Webber said Calpers had provided only a small fraction of the data.

Karl Olson is a partner at Ram Olson Cereghino & Kopczynski and the leading lawyer handling Freedom of Information Act litigation in California. He has sued Calpers several times, including a successful suit for the California First Amendment Coalition, in 2009, forcing Calpers to disclose fees paid to hedge fund, venture capital and private equity managers.

“I think it is unseemly and counterintuitive that these state officials who have billions of dollars to invest don’t drive a harder bargain with the private equity folks,” he said. “A lot of pension funds have the attitude that they are lucky to be able to give their money to these folks, which strikes me as bizarre and certainly not acting as prudent stewards of the public’s money.”

To update you on the state of play with CalPERS: since we received some financial data in February and March, CalPERS has engaged in foot-dragging. Even though CalPERS said in court filings that it stood ready to provide the data we sought, it has failed to do so. For instance, CalPERS’ Deputy Executive Officer for External Affairs, Robert Glazier, promised in mid April that he would send an important missing spreadsheet the following week. More than six months have passed and CalPERS has yet to provide it.

We have three types of data we are seeking: the spreadsheet mentioned (CalPERS has provided an 627 page image, but under California’s version of FOIA, they are required to provide machine-readable records in data form, but continue to fail to comply), commitment dates (CalPERS has consistently ignored this request) and detailed cash flows (of which CalPERS has only provided partial information; by our count, we are still 351 funds short). So of three requests, for two we have yet to receive any information, and for the third, we have received only partial information.

It’s good to see Gretchen Morgenson turn up the heat on general partners, and even more important, the investors that act as their enablers. But at least as of now, the limited partners seem quite content to permit general partners to continue to abuse them; if anything, the SEC’s disclosure of widespread embezzlement and other bad conduct is perversely leading most limited partners to circle the wagons. Hopefully more public concern, particularly pressure from retirees and state legislatures, will remind pension funds that they have strict legal obligations to their beneficiaries, not the smooth talking salesmen who’ve seduced and cowed them.