How many years would it take first-time homebuyers, earning a median household income, to save enough money for the standard 20% down payment on a median home? Are you sitting down?

An impossibly long time in many cities, Lindsay David of LF Economics (and a contributor on WOLF STREET) found in his report on mortgage stress. He looked at 30 large US cities, using their local median incomes and median home prices. It assumed that young households could accomplish the tough feat of saving 5% of their income, year after year, through bouts of unemployment, illness, shopping sprees, family expansions, or extended vacations.

The results are stunning – if just a tad discouraging for first-time buyers.

In my beloved and crazy boom-and-bust town of San Francisco, where a median home (for example, a two-bedroom no-view apartment in a so-so neighborhood) costs $1 million, it would take – are you ready? – 37 effing years.

Given its higher median income, San Francisco is only in second place. The winner by a few months is another Bay Area city, San Jose. In San Diego, it would take 33 years. In Los Angeles, 32 years. First-time buyers might be retired before they scrape their theoretical down payment together. Theoretical, because in reality, too many things change, and they’re chasing after a moving target.

So lower your expectations and step down to buy a below-median home? Here is what TwistedPolitix found on the market in that price category:

If you pay the mortgage back according to the standard 30-year schedule, in April 2045 you will have paid $1,135,721 for a tiny little [bleep] shack. Brilliant!

And that 20% down payment would still amount to $130,000. How long would it take first-time buyers with a median household income to save up this much money? About a quarter century!

In New York City, fifth place, it would take just under 25 years, followed by Miami, Boston, and Seattle. In ninth place, Riverside-San Bernardino, CA, just over 20 years. In tenth place, Denver, just under 20 years. This puts five California cities on the list of the top 10 most impossible cities for first-time buyers to buy a home in.

Of the 30 cities in the chart from LF Economics, there’s only a handful where a household with a median income, and able to save 5%, can come up with a 20% down payment in about a decade. 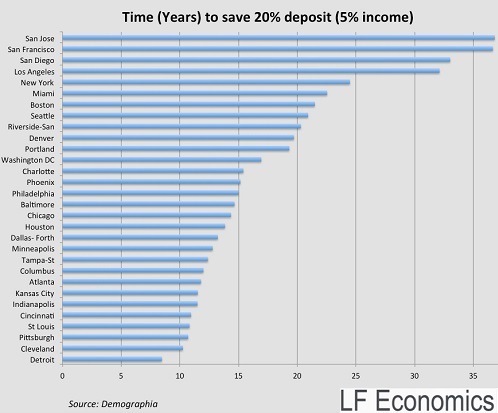 It gets easier when people refuse to move out of their parents’ home. If they don’t pay one dime in rent or help with cable TV or whatever, they might be able to squirrel away 30% of their median income. To come up with a 20% down payment in San Francisco or San Jose, it would take them a little over 6 years.

But for the hardy folks trying to make it on their own, it’s impossible. They probably can’t even save enough for a 3% down payment, which in San Francisco would set them back by $30,000. Charge it on a credit card? Hardly. So perhaps they can bamboozle mom and dad into helping out.

Driving home prices into the stratosphere has been top priority for the Fed. It’s called the “healing of the housing market.” The higher the home prices, the more they’re “healed.” It was designed to bail out the banks, their stockholders and bondholders, such as Warren Buffett who is the largest investor in the nation’s largest mortgage lender, Well Fargo, and presides over a vast finance and insurance empire. It was part and parcel of the Fed’s successful plan to inflate all asset prices via waves of QE and interest rate repression, come hell or high water.

Inflating the prices of stocks and bonds is one thing. People don’t have to live in them. Not so with homes. People have to live somewhere. By inflating home prices, the Fed has inflated the costs of everyday life for all Americans. No big deal for the wealthy. But woe to those on a median income.

The effects are pernicious. In its report on housing, California Housing Partnership Corporation has this to say about California, “the largest and wealthiest state” of the US, where housing is particularly, to use the Fed’s term, healed:

If housing costs are factored into poverty rates (which federal measures do not), then the percentage of people living below the poverty line jumps to 22% in California, up from 16.2% mentioned in federal reports. In that respect, according to the report, the worst is Los Angeles County with a poverty rate of 26.9%. Orange Country, one of California’s wealthiest counties, has the second highest housing-adjusted poverty rate, 24.3%.

These housing costs are confronting people with what the report calls impossible choices: “Rent or groceries? Rent or medication? Rent or a bus fare?”

People who pay a large part of their household income for rent or a mortgage, or who save assiduously for a huge down payment, don’t have much cash left to contribute to the overall economy. Most of their income simply gets confiscated by inflated home prices, or the resulting high rents and associated expenses. It’s channeled to landlords, PE firms, and REITs that own the homes; banks and investment funds that own the mortgages or the mortgage-backed securities; and a million other entities. Most of it becomes part of the grease that keeps Wall Street from squealing. But nothing happens with that money to move the real economy forward.

And renters that stretch to the maximum to pay rent won’t ever be able to save for a down payment to buy an overpriced home.

In this ingenious manner, the Fed has created today’s struggling consumer class that doesn’t have enough money to spend and then gets blamed for not borrowing enough to fire up the languishing consumer-dependent economy.