Lambert here: Apologies for the missing original post, but we’ve had technical difficulties (to be discussed later this morning in Links). Anyhow, this is a useful round-up of current thinking on rightward political swings in the depressed economic conditions that follow financial crises, a topic of great interest around the world.

Alan de Bromhead, Barry Eichengreen, and Kevin O’Rourke write that the danger of extremism is greatest where depressed economic conditions are allowed to persist. Using data covering 171 elections in 28 countries between 1919 and 1939, the authors show that what mattered was not the current growth of the economy but cumulative growth or, more to the point, the depth of the cumulative recession. One year of contraction was not enough to significantly boost extremism but a depression that persisted for years was.

Kevin O’Rourke writes that in August of this year, the inevitable happened: our current recovery was overtaken by that of the interwar period. 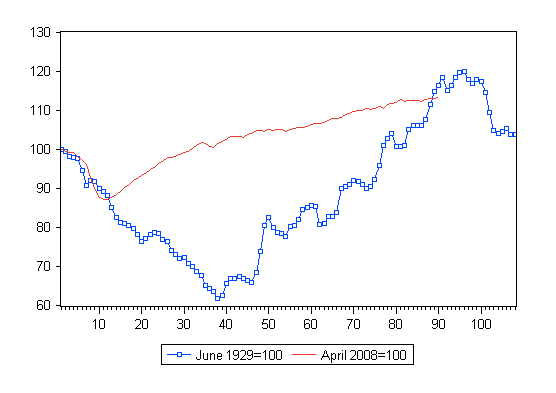 Source: Update of Eichengreen and O’Rourke

Manuel Funke, Moritz Schularick, and Christoph Trebesch write that far-right votes increase by about a third in the five years following systemic banking distress. This pattern is visible in the data both before and after WWII and is robust when controlling for economic conditions and different voting systems. The gains of extreme right-wing parties were particularly pronounced after the global crises of the 1920s/1930s and after 2008. But similar patterns can also be found after regional financial crises, such as the Scandinavian banking crises of the early 1990s. The authors also identify an important asymmetry in the political response to crises – on average, the far left does not profit equally from episodes of financial instability.

Francesco Trebbi, Atif Mian, Amir Sufi write that political polarization systematically increase around financial crises. Voters become more ideologically polarized. Government coalitions become weaker in terms of both vote shares and seat shares. Opposition coalitions become larger. Party fragmentation increases across the board. In his 2003 statistical analysis of the success of extreme eight parties in Western Europe between 1970 and 2000, Matt Golder finds that unemployment has no effect on right wing populist votes when the number of immigrants is low: it is the interaction between economic hard times and the presence of immigrants that  boosts extremism.

Using data on OECD countries from 1970 to 2002, Hans Peter Grüner and Markus Brückner find that a one-percentage-point decline in growth leads to a one-percentage-point increase in the vote share for right-wing or nationalist parties. Declining growth rates reduce incentives of poor individuals to shy away from extreme policy platforms. Redistributing away from specific groups is more tempting when there is little prospect for improvements in the future.

Paul Krugman writes that economics isn’t the only factor; immigration, refugees, and terrorism play into the mix. But Europe’s underperformance is slowly eroding the legitimacy, not just of the European project, but of the open society itself.

Kevin O’Rourke writes that the Euro has not only locked in a set of distorted real exchange rates, but also a macroeconomic policy mix with a pronounced deflationary bias. If times remain tough enough for long enough, and politicians hear your pain but don’t actually do anything about it, some people will eventually respond by voting for candidates who reject existing constraints on policy making. “Europe” is increasingly experienced as a set of constraints preventing governments from doing what their people want them to do, rather than as a means of empowering governments to collectively solve problems.

Paul Krugman writes that it’s not just a matter of times being bad. It’s also important to realize the way in which traditional sources of authority have devalued themselves through repeated policy failure. Europe, much more than the U.S., is run by Very Serious People, who tell the public that it must accept Schengen, austerity, and regulatory harmonization (the eurosausage!), and that these are the right things to do because those who understand how the world works say so. But if things keep going badly, this authority based on the presumption of expertise erodes, and politicians who offer more visceral answers gain support. The point for Europe is that the doctrinaire policies followed since 2010, and the unwillingness to rethink dogma in the light of experience, aren’t just economically destructive. They undermine the legitimacy of the whole European system, and may in the end lead to political catastrophe.

Manuel Funke, Moritz Schularick, and Christoph Trebesch write that the first five years are critical and most effects slowly taper out afterwards. A decade after the crisis hits, most political outcome variables are no longer significantly different from the historical mean. This is true for far-right voting and also for government vote shares and the parliamentary fractionalisation measure. Only the increase in the number of parties in parliament appears to be persistent. The comforting news from our study is that the political upheaval in the wake of financial crises is mostly temporary.