Yves here. This post is written in economese, but it clearly depicts the oil price decline of recent years as being the result primarily of “expectations,” which one can regard as a combination of “deflationary expectations” and “greater financialization of oil pricing”.

By Domenico Favoino, Research Assistant in the Energy and Climate Policy area at Bruegel, and Georg Zachmann, a Senior Fellow at Bruegel, as well as a member of the German Advisory Group in Ukraine and the German Economic Team in Belarus and Moldova. Originally published at Bruegel

By February 2016, the price of oil had fallen to about 30 USD —from about 100 USD per barrel in 2014. There are three possible causes: real changes in supply, real changes in demand and changes in expectations regarding the future oil demand-supply balance.

Oil supply continued to increase in 2015, as US shale oil production was more resilient than previously thought, and countries like Iran returned to the market. In addition, OPEC, a cartel of oil exporters, is not restricting supply. As a result, at the end of 2015, oil production had increased by about 3 percent compared to the 2014 average: from 86 to 88.5 million barrels per day. The International Energy Agency foresees that the world will be “awash in oil” in the near future[1]. This increasing supply put downward pressure on oil prices. 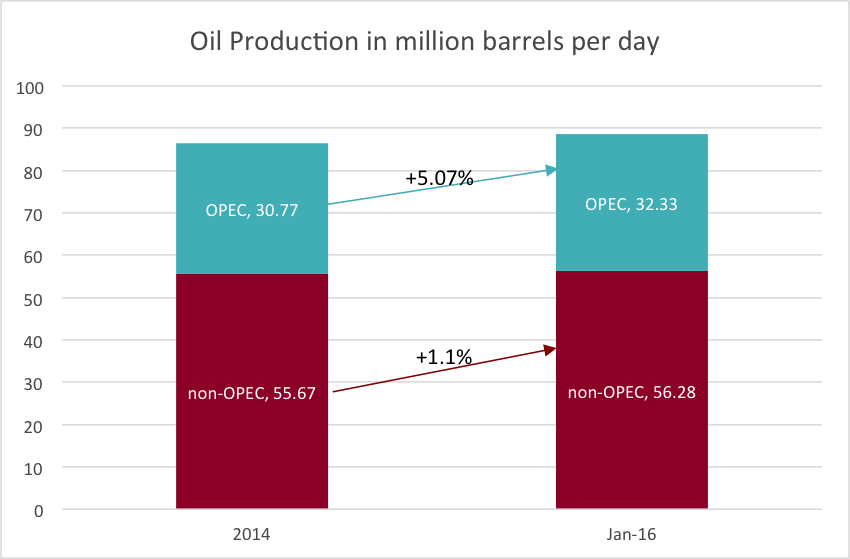 Currently aggregate demand is sluggish. Growth in emerging market economies is slowing and macroeconomic risks in developed countries persist. This reduces oil demand and hence puts additional pressure on oil prices. Finally, price developments are not only explained by changes in real demand and real supply, but also by market actors’ expectations about the future demand-supply balance.

The impact of lower oil prices on the EU economy depends on the relative importance of these three drivers. We find that in the last three years about 12% of the oil price decrease can be attributed to a fall in aggregate demand and 15% to an increase in current oil supply. 73% of the price drop can be attributed to expectations about the oil demand and supply balance. This is the finding of an analysis based on Kilian (2009), where we decompose oil price shocks into these three elements by estimating a structural VAR model in which the oil price reacts – with some delay – to changes in monthly oil supply and a measure of economic activity. Essentially, we update the analysis of Kilian and apply it to the EU economy.

What does this imply for the EU economy? Past experience has shown that the three components have structurally different impacts on the economy (see graph):

Note:  relative q-o-q percentage change of GDP due to a 1 percent change in oil price due to a supply/demand/expectation shock. The solid lines correspond to pint estimates; dotted and dashed lines identify one- and two- standard error bands, respectively.

The most striking result of this decomposition is that the role of expectations has dramatically increased since 2008. The data imply that that it is very unlikely (less than 5% probability) that oil prices after 2008 are driven by the same combination of factors as before 2008. In fact, expectations regarding the future oil demand-supply balance seem to have become the main driver of oil price changes. This would be consistent with a hypothesis that oil markets are becoming more detached from observable supply-and-demand fluctuations (one possible explanation being loser monetary policy).

In conclusion, the observed drop in oil prices should have a slightly positive in pact on the EU economy. However, this prediction presumes that past relations between oil demand, oil supply, oil prices and GDP still hold. In fact, the structural increase in the importance of expectations in oil price formation raises doubts about the stability of these past relations. The true impact of the oil price drop therefore remains to be seen — and could prove disappointing in the end.