U.S. lags in road safety Science News (Donald ). WTF with this data? Cars are a very unsafe means of transportation but Americans drive a ton. Needs to be adjusted for average miles driven per year per adult, or better yet, per licensed driver

What if PTSD Is More Physical Than Psychological? New York Times (guurst) While this may be true in many cases, this point of view also fits with the recent predisposition to view mental health problems as physical. Just adjust the brain chemistry and you’ll be fine! But some therapists have had success treating PTSD patients with EMDR (eye movement desensitization and reprocessing) which would not fit this pattern. I must confess to having read only the first part of the article, but the research they present is extraordinary thin, and it seems remarkable The Lancet would publish it. Only three brains studied, and only one of them was of a guy who had PTSD? The other two died days after a blast exposure and had apparently not developed psychological symptoms. In other words, this looks like a major case of confirmation bias.

Corbyn: I would put up taxes to fund public sector pay rises Guardian

Libya, not Syria, is now the frontline in the war against Isis Independent (resilc)

This Company Has Built a Profile on Every American Adult Bloomberg

Pentagon Tapping In to Social Science to Target Activist Movements Truthdig (Judy B). I would have assumed they’ve always been doing this…so maybe the difference is scale?

What Americans want from the world Reuters (resilc)

America’s great mistakes: Has everyone forgotten that the Vietnam and Iraq wars were unnecessary, stupid and destructive? Salon (resilc)

Bernie Sanders’ Delegates Speak Out About Convention: “They Painted Us As Crazy” In These Times. A companion piece to our guest post today from a Sanders delegate.

#HillaryCoverageIsCrap. Phil U points out this was trending…

The Elective Affinities of Hillary Clinton Counterpunch (Judy B)

Voter Discord Isn’t Over Wages Wall Street Journal. This is elite cluelessness. Jobs are less stable, there is a huge army of underemployed, hardly anyone has a pension, health insurance is getting worse and more costly for people who have jobs and Obamacare sucks for those who don’t get insurance for their employer (save for some people in some areas and income brackets where they do get decent subsidies and decent networks, but anecdotally this is not the norm). More than half of American live paycheck to paycheck. Wages are too low for most people to have any sort of reserves, and social safety nets suck. So people are supposed to be happy that income is up…..almost exclusively for the top 10%?

Donald Trump’s Campaign Website Won’t Let Some Cancel Recurring Donations MoneyMic (Dr. Kevin). Funny, I’d always go to the card provider to cancel a recurring payment precisely because I’m skeptical that the vendor end works even when they say it does. But it is really inconsiderate not to have this feature working properly.

Trump to Propose Moratorium on New Financial Regulations Bloomberg. The estate tax ban should not go over well with the working class voters who are paying attention. This makes Trump look like a bog standard Republican. But it does fit with Lambert’s thesis that Trump is trying to appeal to local oligarchs, while Clinton is targeting national/multinational ones. The reckless Trump was much more entertaining than the Manafort-scrubbed product.

How a Top GOP Lawyer Guided a Chinese-Owned Company Into U.S.Presidential Politics Intercept

We’re in a Low-Growth World. How Did We Get Here? New York Times (resilc). Hard to understand only if you don’t want to understand it. 40 years of not sharing productivity gains with workers leads to more income in the hands of those with less propensity to spend, which means less demand, which means less growth. As a result, those with the $ don’t invest in the real economy enough out of a combination of having overly high return targets and growth being below potential. Add to that a huge cutback in basic R&D, both gov’t supported and paid by quasi or actual monopolies that took pride in that sort of thing (Bell Labs, Xerox Parc), as well as underinvestment in infrastructure.

An inconvenient iota of truth: The third in our series looks at the Stolper-Samuelson theorem Economist (Nikki)

Two guys in a Connecticut jail cell helped change the way America does drugs Business Insider. Dan K: “I think people need to understand crime better. Crime is not a byproduct or aberration, it’s as intrinsic to process (systems) as mutation and decay. One can’t remedy dysfunction if one can’t recognize its origins and its patterns. And moralizing is not at all helpful, shows a lack of intellectual rigor and of emotional depth.”

Ostensibly a review of “The Game Theorist’s Guide to Parenting: How the Science of Strategic Thinking Can Help You Deal with the Toughest Negotiators You Know—Your Kids”… read at least to the 4th or 5th para to get to a deeper review of the state of (mainly mid-upper class) parenting in contemporary/recent context. Relevant because that’s an influential sector.

They put their trust in webs of internships and institutional affiliations—crony capitalism as the new meritocracy. Even childhood can seem rigged.

Antidote du jour. Tam: “Here’s a picture of my cat P’ing (he’s a rescue cat who was originally called Pudding) cunningly disguised as a Panda!” 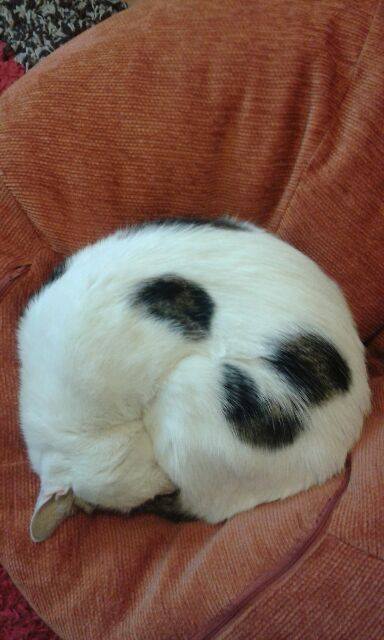