Over the past five years, global trade growth has been stagnant. With protectionist sentiment intensifying across advanced economies and China and other emerging markets (EMs) appearing to pivot away from export-oriented growth strategies that had incentivised the creation of global supply chains in the 2000s, a hypothesis informally known as ‘peak trade’ has become increasingly popular (Economist 2014). According to this view, the current trade stagnation is not temporary, but instead reflects fundamental changes to the global economy. In the coming decades, these changes will prevent growth in global trade from outpacing growth in global GDP, as it has since World War II. If true, this idea has profound implications. It implies a stoppage, or even a rolling back, of many of the core benefits and costs that have come to define the globalised world, including increased gains from trade, cross-border financial flows and geopolitical interdependence.

Our analysis (Tomb and Trivedi 2016), which we outline here, counters this view. Using a variety of approaches, together with data that allows us to track the paths of nearly 400,000 trade flows over the past 20 years, we push back against three primary variants of the peak trade argument.

First, many economists note that the measured sensitivity of trade growth to income (or GDP) growth has declined in recent years (for example, Escaith and Miroudot 2015). This ‘trade beta’ has fallen from above 2 to near, and even below, 1, the value at which trade simply keeps up with income. Our work suggests, however, that the trade beta—not a clearly-defined structural parameter, and difficult to estimate without bias—may not reliably represent the actual (causal) effect of income growth on trade growth. Shifts in different countries’ relative GDP growth rates, for example, can distort the trade beta in standard cross-country models, creating the impression that income is having a larger or smaller influence on trade.

More generally, the trade beta is not a sufficient statistic for the evolution of global trade. Shifts in the measured trade beta sometimes sit awkwardly with the broader global trade picture. For example, Figure 1 shows that the trade beta—estimated using a standard ‘gravity equation’—declined sharply in the early 2000s, a period of historically rapid trade growth. Moreover, estimating the trade beta with our detailed data set reveals year-to-year changes that are too volatile—including in recent years—to plausibly reflect shifts in meaningful economic relationships. 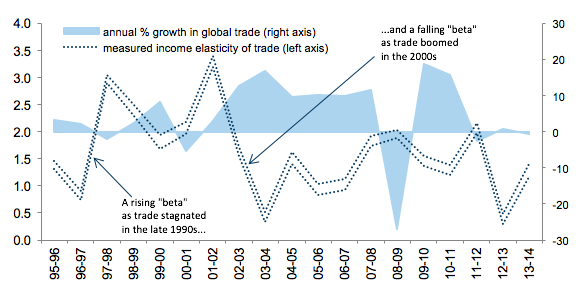 While we can’t rule out the possibility that the relationship between income and trade has changed over time, we think the evidence is also consistent with a simpler explanation. The causal effect of income growth on trade growth may have stayed roughly stable over time, while other forces—including shifts in the demand for tradeables, changes in trade costs and the availability of trade finance, and the ebbs and flows of protectionist trade policies—have played the starring role in driving global trade over the past two decades, and will continue to do so in the future.

The collapse in global trade growth in 2011 is an example of the influence of other such factors. The slowdown in trade flows across the globe during the US debt ceiling crisis and the euro area sovereign crisis that summer was far more severe than predicted by observable short-run (or ‘cyclical’) drivers, such as a mild slowdown in global GDP growth. This prompted many observers to conclude that ‘structural’ changes—forces operating over very long time horizons, and with the potential to drive trade growth still weaker in coming decades—were, in large part, responsible (Constantinescu et al. 2016). We think the facts sit better with an alternative interpretation: a return to trend. Setting aside the financial crisis years, global trade growth has undergone two major shifts in the past two decades: 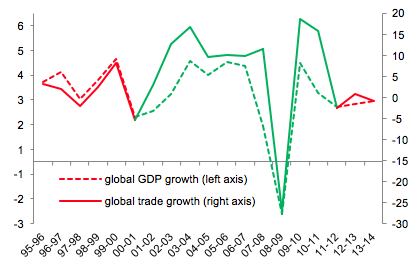 In sum, the global trade slowdown does not appear to be the beginning, or the middle, of a downward deviation from a 70-year trend of globalisation, but instead marks the end of a decade-long upward deviation from this long-run trend—the trade boom of the 2000s. This is evident not just at the aggregate level, but also when we dig deeper into individual trade flows. For example, Figure 3 shows that the countries that dramatically increased their import growth in the 2000s (such as India and Russia) saw the largest import growth declines in 2011, while countries that experienced a mild acceleration in the 2000s (such as Mexico and the Philippines) saw their import growth rates only mildly affected by the global trade slowdown.

Figure 3 The trade slowdown is, in large part, the end of the 2000s trade boom 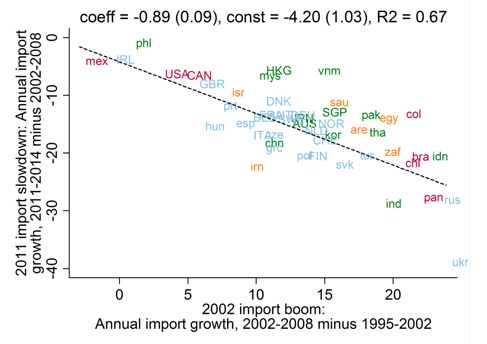 Notes: The figure plots the ISO codes of 49 countries that, together, account for roughly 95% of global imports. Imports are measured in value terms. The regression results reported in the figure are weighted by each country’s average share of global imports, 2002-2014. The four colours of the plotted countries represent four geographical regions: Africa and the Middle East (orange), the Americas (red), Asia (green) and Europe (blue). Countries plotted in lower (upper) case featured 2002 per-capita GDP of less than (greater than) current USD $20,000.
Source: Goldman Sachs Global Investment Research; United Nations Conference on Trade and Development; World Bank.

As Figure 4 makes clear, a similar pattern is also visible at the level of individual goods: those goods that saw the largest increases in the rates by which they were traded in the early 2000s then saw these growth rates fall back to baseline during the global trade slowdown.

Figure 4 Trade in specific goods accelerated in the 2000s, then returned to baseline during the global trade slowdown 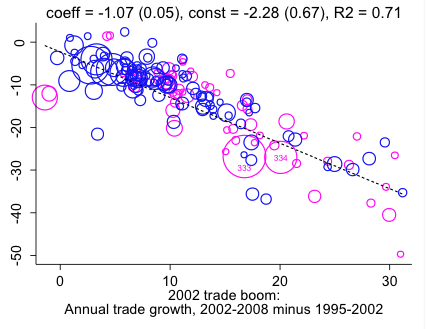 Notes: The figure plots 166 goods that account for 95% of global trade between 2002 and 2014. Dotted line represents regression of vertical on horizontal axis. Each bubble represents one of 255 three-digit UNCTAD good codes. Bubble size represents the good’s average share of global trade, 2002-2014. The regression results in the figure are weighted by these shares. The displayed categories 333 and 334 each represent petroleum. Manufactures are plotted in dark blue; commodities are plotted in magenta.
Source: Goldman Sachs Global Investment Research; United Nations Conference on Trade and Development.

Peak trade view #3: A change in the EM growth model

Finally, many observers suggest that, by beginning to turn away from export-led growth models, EMs—and, especially, China—have driven the trade slowdown and may weigh on trade growth further in coming decades.1 We agree that long-run declines in Chinese trade growth likely reflect important and potentially persistent changes to the Chinese economy, and that these changes may impose an important drag on the open economies of Asia in future (for example, China alone accounted for a third of the slowdown of South Korea’s exports during the global trade slowdown).

Figure 5 Europe imports a large share of global trade, and was the key driver of the global trade slowdown 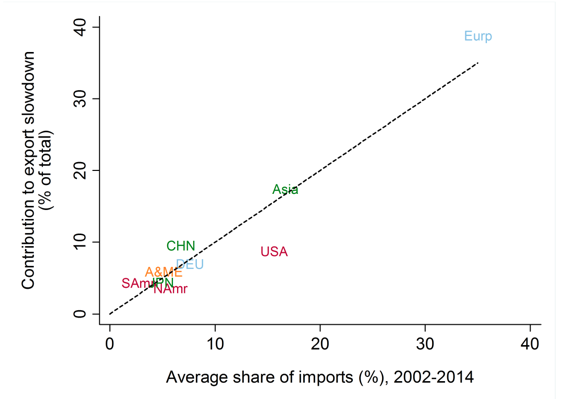 Downside risks are prominent, but ‘peak trade’ is premature

With the UK voting to leave the EU, US President-elect Trump highlighting his intention to withdraw the US from the Trans-Pacific Partnership, and the potential for political populism to make inroads in continental Europe, the outlook for global trade is uncertain, and the downside risks from policy have risen. While it is easy to get pessimistic about the prospects for trade growth based on recent political news, it is however worth noting that we have seen some progress towards important trade agreements (such as the current negotiations between Japan and the EU), and that some trade flows—including flows sent from key global exporters in Asia (Figure 6)—have quickened in 2016. 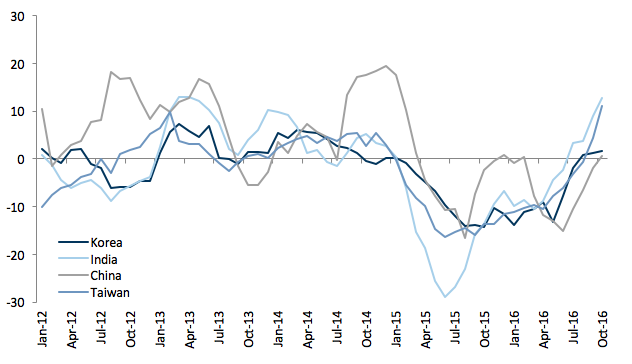 To sum up, we do not think that the stagnant trade growth of the past five years is more sinister than the typical ebbs and flows associated with shifts in income growth, technological innovations, and policy changes that have driven the growth of global trade since World War II. Though material downside risks to the trade outlook are highly visible at the moment, a conclusion that this represents ‘peak trade’ is, in our view, premature.

See the the original for references.