After 69 years in business, retailer Toys R Us filed for Chapter 11 bankruptcy this week– the second largest US retail bankruptcy ever.

Private equity’s role in causing the company’s demise is evident– as has been the case for a slew of retailer bankruptcies this year. Posts such as this one earlier in the summer by Yves mean the overall trend isn’t news to regular readers, see Private Equity Firms Sued Over Retailer Bankruptcies (and the earlier links included therein).

Nonetheless, many, including yesterday’s Financial Times are now also piling on the private equity culprit with respect to Toys R Us:

But the blame is perhaps to be placed most squarely on its private equity ownership. Toys R Us has spent more than $250m a year servicing $5bn in long term debt, which was “not a sustainable situation,” one investor said, as the company faced increasingly crushing competition from Amazon and Walmart.

After years of rearranging its debt burden, like other big leveraged buyouts of the pre-financial crisis era, it is presenting a restructuring under bankruptcy protection as a bid for freedom. Toys R Us says it now has a chance to bring its “vision to fruition”, announcing plans to invest in marketing and technology and even promising to raise store employees’ wages.

Likewise, Pam and Russ Martens don’t mince words when they describe the underlying cause for this year’s wave of retail bankruptcies in their Wall Street on Parade post, How Many of 2017’s Retail Bankruptcies Were Caused by Private-Equity’s Greed?

What many of these retailers have in common is that they were taken private in leveraged buyouts (LBOs) by private equity (PE) firms. Toys ‘R’ Us, Payless ShoeSource, The Limited, Wet Seal, Gymboree Corp., rue21, and True Religion Apparel were all LBOs. Gander Mountain can also be included in this list if you reach back to its 1984 LBO. Far too many LBOs are simply asset stripping operations by Wall Street vultures who load the company with enormous debt, then asset strip the cash from the company by paying themselves obscene special dividends and management fees.

Please permit me to reproduce their list of the largest retail names that have sought bankruptcy protection thus far in 2017:

The FT article points out that in 2005, Toys R Us hired Credit Suisse, who arranged for a consortium of Bain Capital Partners, Kohlberg Kravis Roberts, and Vornado Realty Trust to do a leveraged buyout (LBO). The deal was valued at $6.6. billion dollars, with just over 20%–  in cash, split equally– with the remainder financed by debt. (For those interested in delving into the details further, I include a link to the company’s  April 2006 10-K.)

And, cry me a river, again according to the FT:

The three buyers who leveraged it are now expected to have their equity stakes wiped out in the restructuring. KKR and Vornado have written off their investment over time, while Bain has been carrying it near zero.

However, the losses to the firms and their investors are mitigated by the fact the buyout firms have paid themselves over $200m in expenses, advisory and management fees, according to SEC filings over 12 years of ownership.

Wolf Richter spells out in his post from earlier this month, Brick & Mortar Meltdown: Toys R Us Hires Bankruptcy Law Firm, in terms familiar to those who know how these stories go, some further details:

So here’s what the three PE firms did to Toys R Us: they stripped out cash and loaded the company up with debt. And these are the results: At the end of its fiscal year 2004, the last full year before the buyout, Toys R Us had $2.2 billion in cash, cash equivalents, and short-term investments. By Q1 2017, this had collapsed to just $301 million. Over the same period, long-term debt has surged 126%, from $2.3 billion to $5.2 billion.

This table shows the astounding results of asset stripping and overleveraging. It takes a lot of expertise and Wall Street connivance to pull this off. So whatever happens to Toys R Us, the PE firms already extracted their wild profits: 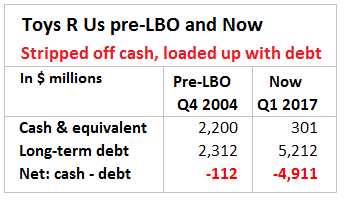 Unfortunately for the company, over the same period– 2004 through 2016–  when its debt has ballooned, its annual revenues have remained essentially flat at just over $11 billion.

Permit me to quote at length from Wolf again:

After extracting enough cash from Toys R Us and loading it up with a debilitating pile of debt, the three PE firms tried to unload it to the unsuspecting public in an IPO in 2010. They were hoping for an additional payday, the icing on the cake, so to speak. But they had to scuttle their efforts due to “challenging market conditions.”

Incapably managed by the PE firms, Toys R Us has been losing market share in its struggle with online retailers, particularly Amazon, and with Walmart at every level, and with other toy stores. Nevertheless, if the company weren’t overleveraged and didn’t have PE firms leeching off it, its slowly declining revenues and thinning profits turning to losses wouldn’t be the end of the world.

In poking around and looking at some of the financial filings, I was a bit surprised to see how the company’s post-LBO difficulties were astutely anticipated in its April 2006 10-K (p. 20), in which the potential serious, negative consequences of the leveraging it had assumed were spelled out, including:

For those more numerically inclined, let’s take a closer look at some of the numbers, which  make the size of the debt albatross with which Toys R Us was burdened especially clear.

I’m going to draw heavily on this post in Seeking Alpha, Private Equity, Not Amazon, Killed Toys ‘R’ Us, from which the exhibits are drawn (which were in turn generated from relevant company filings, e.g., 10-Ks and 10-Qs).

Exhibit A – Top-line sales are down $2 billion over the past five years. 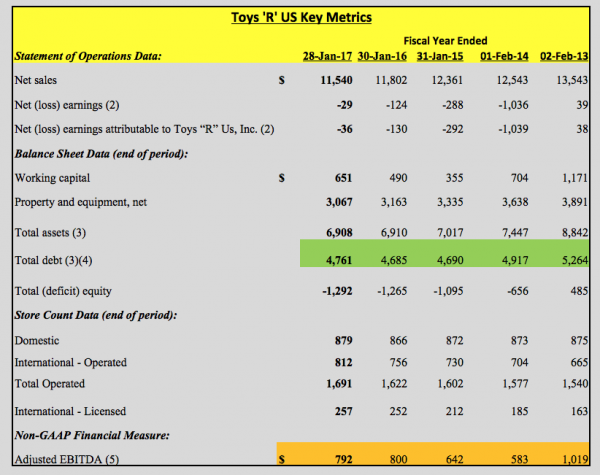 $5.2 billion in debt as of April 2017 is insurmountable, given the weak operating performance. As you can see, there is $400 million in debt maturing in 2018. 7.375% coupon debt isn’t exactly low interest debt, but that is what happens when the greedy private equity firms lever up companies with “Other People’s Money” (OPM). 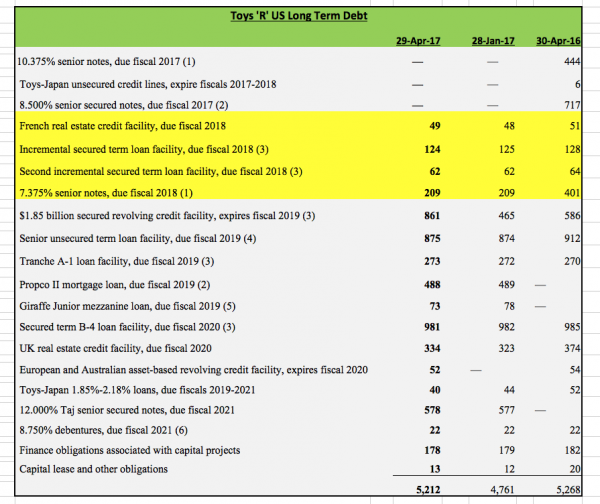 Seeking Alpha notes the company has been burdened with interest expense in the range of  $425-517 million per year since 2013, making it very difficult to operate competitively (Exhibit C).

Jerri-Lynn here: Allow me to repeat the last item in that list of important consequences that flow from extreme leveraging as outlined in the company’s 2006 10-K:

limiting our ability to adjust to changing market conditions and to react to competitive pressure and placing us at a competitive disadvantage compared to our competitors who are less highly leveraged.

There’s probably very little in this post that will strike anyone following this story closely as new or novel. Nonetheless, the blame for this latest round of retail companycide is clear, so that I thought when I saw the venerable pink paper’s account, it was worth a short post.