Princeton University economist Alan Krueger will present his latest paper, Where Have All the Workers Gone? An Inquiry into the Decline of the U.S. Labor Force Participation Rate,  at the Brookings Institution in Washington today.

The paper examines the labor force implications of the opioid epidemic on a local and national level.

Krueger’s  headline finding is that the increase in opioid prescriptions from 1999 to 2015 possibly accounts for about 20% of the observed decline in men’s labor force participation (LFP) in the United States over that same period, and roughly 25% of that for women.

Krueger recognizes these findings have huge policy implications.  As reported in The Wall Street Journal:

“The opioid epidemic and labor-force participation are now intertwined,” Mr. Krueger said. “If we are to bring a large number of people back into the labor force who have left the labor force, I think it’s important that we take serious steps to address the opioid crisis.”

Trump declared the opioid crisis to be a national emergency last month, as I’ve previously discussed here. Thus far, there’s scant cause for optimism that this rhetoric will be matched by a policy response adequate to the task at hand. Opioid overdoses account for nearly 100 overdose deaths a day in the US, the FT reports today, and cites Centers for Disease Control figures showing that prescription US opioid medication sales per person surged 356% between 1999 and 2015. This post, The American Opioid Epidemic, provides an overview of recent academic literature on the issue.

Krueger’s latest paper builds on earlier research he presented at a Federal Reserve Bank of Boston conference in October 2016. In that earlier work, Krueger found that nearly half of prime age men who are not in the labor force take pain medication daily. Two-thirds of those men—or about 2 million— take prescription pain medication daily.

According to the paper to be presented today:

The US LFP rate in the United States peaked at 67.3 percent in early 2000, and has declined at a more or less continuous pace since then, reaching a near 40-year low of 62.4 percent in September 2015 (see Figure 1). Italy was the only O.E.C.D. country that had a lower labor force participation rate of prime age men than the U.S. in 2016. Although the participation rate has stabilized since the end of 2015, evidence on labor market flows – in particular, the continued decline in the rate of transition of those who are out of the labor force back into the labor force – suggests that this is likely to be a short-lived phenomenon. 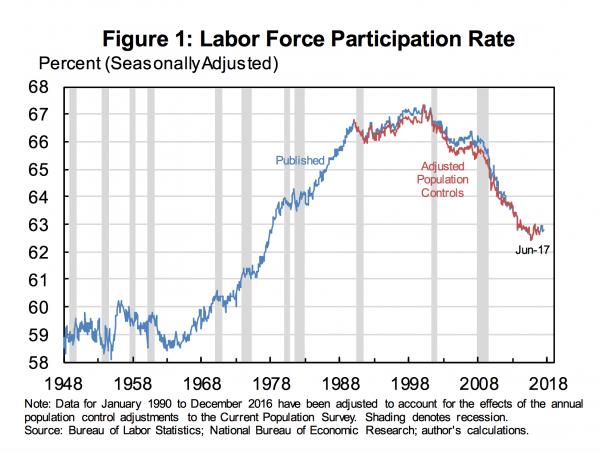 Source: Alan B. Krueger, Where Have All the Workers Gone? An Inquiry into the Decline of the U.S. Labor Force Participation Rate.

Regular readers are well aware of the landmark 2015 study by Anne Case and Angus Deaton on the mortality and morbidity consequences of the increasing immiseration of the American white working class and their follow-up published in March of this year, each covered extensively by Naked Capitalism (see here, here, here, here, here and here, among other places on this site). That study and the follow up discuss the rise in what  Case and Deaton call “deaths of despair.”

Krueger has found opioid prescription rates vary widely across the United States. In counties where health care professionals write more opioids prescriptions, pain medication is more widely used. The paper found  a 10% increase in opioid prescriptions per capita is associated with a 2%  increase in the share of individuals who report taking a pain medication on any given day. The effect is cut roughly in half, Krueger wrote, when individuals’ disability status, self-reported health, and demographic characteristics were accounted for, but remains statistically significant.

These findings support the CDC’s view that differences in health conditions do not vary enough across areas to explain the large cross county differences in the use of pain medication (paper, p. 34).

Krueger’s research examined linkages between these differences in cross-county prescription rates and changes in LFP. Over the 15 years covered by the paper, Krueger found that LFP fell more in counties where more opioids were prescribed (paper, p. 35). 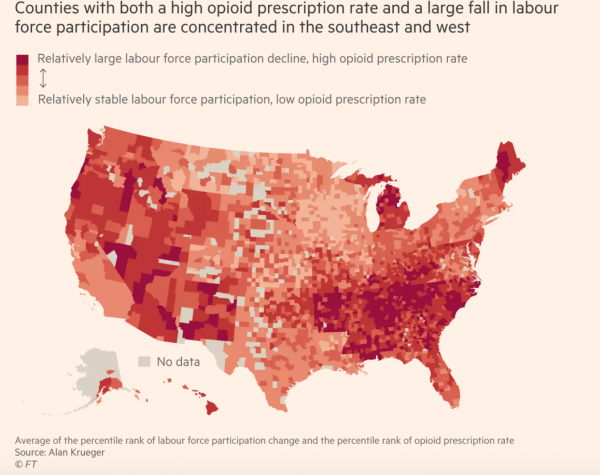 Whither Direction of Causality

Note that the FT highlights a key ambiguity:

Mr Krueger found that the fall in overall participation since 2007 was largely the result of an ageing population, something that cannot easily be reversed. But he also uncovered a link between falling participation and rising opioid drug use — even if it was difficult to pick apart exactly how the two inter-relate.

This Quartz article elaborates on the causality point:

To be clear, we still don’t know whether the explosion in opioid prescription is causing labor force detachment, or vice versa. And there’s mounting evidence that disengaged workers, especially prime-aged men, may have a serious health condition that precludes work.

More than half of prime-aged men who don’t want to work report spending their day in pain—and close to half medicated the day before. Prime-aged men in particular are significantly less happy and more stressed than their employed and unemployed counterparts, says Krueger. And they find their lives less meaningful. These men are more than eight times as likely to be in poor health than both employed and unemployed men. They also face substantially higher rates of disability, which have only worsened over the past decade.

Regardless of the initial direction of causality, Krueger notes that 40% of those men not in the labor force (NLF) who were surveyed report that pain prevents them from accepting a job (paper, p. 38). So addressing that pain is necessary to allow these sidelined individuals to return to the labor force.

Over to Krueger for the (next to) last word:

…[A]ddressing the decades-long slide in labor force participation by prime age men should be a national priority. This group expresses low levels of SWB and reports finding relatively little meaning in their daily activities. Because nearly half of this group reported being in poor health, it may be possible for expanded health insurance coverage and preventative care under the Affordable Care Act to positively affect the health of prime age men going forward. The finding that nearly half of NLF prime age men take pain medication on a daily basis and that 40 percent report that pain prevents them from accepting a job suggests that pain management interventions could potentially be helpful.

Evidence presented here suggests that much of the regional variation in opioid prescription rates across the U.S. is due to differences in medical practices, rather than varying health conditions that generate pain. Furthermore, labor force participation is lower and fell more in the 2000s in areas of the U.S. that have a higher volume of opioid medication prescribed per capita than in other areas. Although some obvious suspects can be ruled out – for example, areas with high opioid prescription rates do not appear to be only masking historical manufacturing strongholds that subsequently fell on hard times – it is unclear whether other factors underlying low labor force participation could have caused the high prescription rates of opioids in certain counties. Regardless of the direction of causality, the opioid crisis and depressed labor force participation are now intertwined in many parts of the U.S. And despite the massive rise in opioid prescriptions in the 2000s, there is no evidence that the incidence of pain has declined; in fact, the results presented here suggest a small upward trend in the incidence of pain for prime age NLF and unemployed men. Addressing the opioid crisis could help support efforts to raise labor force participation and prevent it from falling further (paper, pp. 38-39).

The opioid crisis and depressed labor force participation are indeed now intertwined throughout the US. Although Krueger tries to be agnostic on the causal issues — e.g., “regardless of the direction of causality”, it seems to me that he could equally well say that increasing labor force participation could help alleviate the opioids crisis. Better economic opportunities would reduce economic despair, and lead fewer people to turn to opioids to mask their pain.