…As the clever hopes expire
Of a low dishonest decade:
Waves of anger and fear
Circulate over the bright
And darkened lands of the earth,
Obsessing our private lives… –W.H. Auden, September 1, 1939

Well, here we are, four years after election day’s eve in 2016. Time to kick back, as some of you may already have done, although I would not advise drinking:

well it's the night before the election, time to eat one (1) gigantic mouthful of plain cottage cheese and put my head in a vice

First, some jokes. This one hurts because it’s true:

#BREAKING Polls are set to open in 48 hours across the US as the authoritarian regime of Donald Trump attempts to consolidate its hold over the troubled, oil-rich, nuclear-armed, north American nation. Analysts are sceptical the election will end months of political violence.

The whole thread is great — including classing the flag-waving Trump trucks as “technicals” — and it’s not like the West hasn’t earned it.

You have probably seen this, but ICYMI, this is most accurate election prediction map: pic.twitter.com/nq5tW2vVBY

A note to obsessives:

Unity. Pass it on. pic.twitter.com/U33tRRVjkF

Readers, this is really meant to be a live blog, so if any of you are following the events of the day, and the count, in the mainstream press, otherwise online (for example, on YouTube), or on podcasts, please leave links here. And if any of you spot anything interesting or irregular on the ground, please share.

While waiting on the main event, I’ve put together some material to instruct and amuse, to which you naturally may add. First, some jokes. Then, some useful links on the election itself. Finally, I’ll elaborate on the call I’ve already made, in comments.

“When To Expect Election Results In Every State” [FiveThirtyEight]. Handy map: 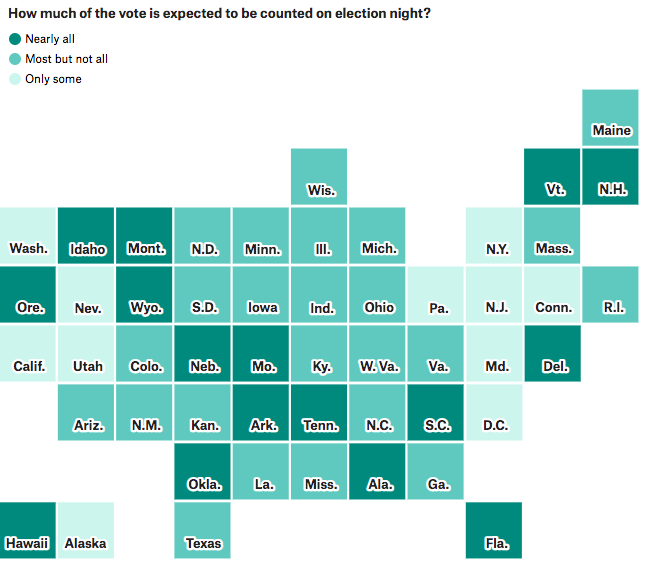 Note that Florida delivers results early. Biden can win without Florida. Trump most probably cannot. Patience is a virtue:

The upshot for the presidential race is that we should have a pretty good idea of where things are headed on election night, even if no candidate is able to clinch 270 electoral votes (which is the threshold required to win) until later in the week. We should get near-complete results in Florida in a matter of hours; Arizona and North Carolina will release the vast majority of their ballots very quickly, although if the race is too close to call they may not provide a final answer for days. Georgia and Texas should tally most ballots on Nov. 3, but counting may stretch into Wednesday or Thursday. We should know the winner in Wisconsin by Wednesday morning; Michigan and Pennsylvania, by contrast, will probably take until the end of the week. 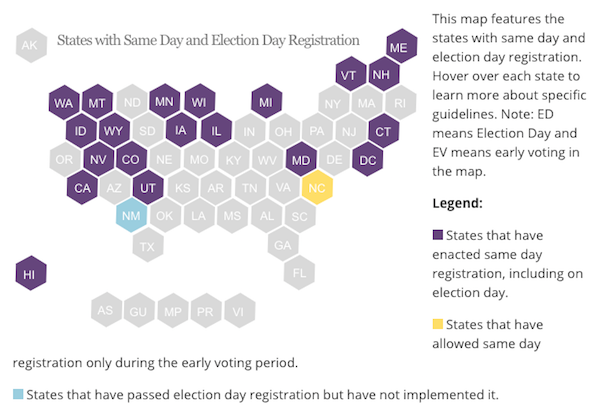 Note that you must go to the link to hover over each state to get detail.

“Here’s when each state starts tallying up mail-in ballots” [The Hill]. “Many states can start processing ballots before Election Day, even if they don’t start counting them until Tuesday. Either way, the results are never released until after polls close in that state.” • Sadly, there’s no map, but all the states are listed.

Next, my priors. I should say that I underestimated liberal Democrat appeal in the 2018 midterms, because I couldn’t stand their messaging. (“How could anybody fall for this?”) While the Blue Wave was by no means a tsunami, nevertheless it was more than a ripple. I don’t feel bad about guessing wrong because all the state polling was terrible, but guess wrong I did. Well, I can’t stand liberal Democrat messaging in 2020 any more than I could in 2020, so I may be erring on the low side this year, too.

I think the polling and the reporting is so corrupted that it’s too difficult to reverse engineer facts on the ground from it (due to the “airtight consensus” referred to by Thomas Frank).

… I think a Biden victory is more likely than not. First, Covid — regardless of systemic issues that should be, but will not be, raised — happened on Trump’s watch. Voters will punish him for that. Second, Trump’s messaging has been scattered and undisciplined (no doubt due to lack of the A/B testing he did with crowds in 2016). Third, we are seeing what looks like the birth of class consciousness in the PMC, and the suburban vote + Never Trump Republicans giving the country club permission to vote for Biden will help. Fourth, none of the potential Trump October surprises panned out: No (colorable claim of) a vaccine, economy not good enough, no foreign policy deal (e.g., North Korea), [and no Durham Report]. Hunter Biden’s issues wouldn’t have made the grade even without liberal Democrat censorship.*

I expect the Republican party apparatus to suppress as many votes as they can (which they do in the general; Democrats only suppress votes in the primaries), and I expect, from anecdotes, surprisingly big turnout by Trump voters on election day, but I expect Biden to escape that pincer movement.

NOTE * Here too the Trump campaign and/or its allies failed to execute. If Hunter Biden’s laptop had surfaced in September, there would have been time to construct a proper narrative, bludgeon the platforms, etc.

My second choice is the stupidest outcome imaginable: An “Electoral Commission,” a la the Hayes/Tilden election of 1876, which would involve the vilest backroom dealing you can possibly imagine. (I think Roberts will use all the influence in D.C. that he has to avoid a second “Bush v. Gore” because that would destroy the Supreme Court as an institution, so I don’t think this election will be decided by the Court. Trump and McConnell may intend that, but that doesn’t mean they will get what they want.)

And my view of the shortly-to-be triumphant Democrat Party:

My view of election 2020 — I think Trump is out of runway, feral though his ground operation may be — is that the Democrat Party, with its class basis in the PMC (see Thomas Frank) showed enormous political dominance, having seen off not one but two populist threats, one from the right and one from the left. (The Sanders campaign, and especially its funding model, has been carefully erased, though hilariously the Trump campaign is said to have adopted the Sanders technique of relational organizing.) In the day-to-day cut and thrust of politics*, Democrats compensate for the numerical weakness at the Democrat base — unlike the FDR coalition, the PMC is nowhere near a majority of the population** — with their control of the commanding heights of the media, an alliance with the intelligence community, and a structural requirement that our extremely broken systems all require highly-paid bubblegum and duct-tape operators with credentials to run.

If we think of Corey Robin’s idea that conservativism is “a meditation on lost power,” then we see clearly that the Resistance, leading to a Democrat Restoration led by the Obama Alumni Association, West Wing fans, and a necessary leavening of Bush-era war criminals, is a conservative reaction to Trump’s victory in 2016, with its concomitant rejection of Clinton, the “most qualified” candidate (and, as a [x] woman, a symbol of justice as conceived of by aspirational PMCs).

Assuming a Biden victory, the PMC will have re-asserted their natural right to rule (in service of capital, too, let us not forget). How will they exercise this power? More concretely, how will the Biden campaign exercise its power in implementing Covid policy?

History and PMC class interest together, as Romer argues and Frank shows, give the likely answer: “Not well.” Given past behavior, one would expect a doubling down on fingerwagging and shaming across the media spectrum, and (hence) a contact tracing program that doesn’t win the trust of those most in need of it. (Hero Fauci being lauded, because Orange Man bad, after having told his “noble lie” on mask effectiveness gives off a terrible stench of rot; what will “the experts” remorselessly lie about next, pray tell? Vaccine efficacy and safety?)

Naturally, I pray that I’m wrong, and that Rule #2 of Neoliberalism does not apply.

NOTE * That is, not at the level of abstraction required by Ferguson et al.’s industrial model, whose operations become evident only well after facts on the ground, because campaign finance is horridly obfuscated.

NOTE ** And willful Democrat refusal to expand their base shows they have no intention to become so.

Of course, if Trump wins Florida and Texas tonight, and puts Pennsylvania in play, Democrats will turn to have been a lot less dominant than I thought. But IIRC, McKinley (“airtight consensus”) beat Bryan (“populist”) like a gong. All that money helped.

UPDATE Are they trying to get me to vote for the other guy?

I think it adds more value if you take a moment, use your critical thinking skills, then comment, and readers can discuss what you say. That way, those who cannot watch the debate — or can’t stand to do so — can get a good idea of what really happened by reading what you write after the fact. This is what the NC commentariat is so very good at, after all. Last time, the times before that, and this time. Thank you!