Yves here. This is a persuasive forecast of what the next phase of the Ukraine war might look like and what the territorial disposition could be. Note that Helmer does not think the Russian plan is for a breakup but a reconstitution in a more federalized, or what the Brits might call devolved structure.

Many might depict a resolution of the sort Helmer sketches out as a Russian failure, but Russia never wanted to occupy or conquer Ukraine. The objectives were to make sure Ukraine would not join NATO and to demilitarize and denazify it. It was always unclear as to what the last goal might amount to. Scott Ritter has described one way it might be achieved. The neo-Nazis constitute a guesstimated 10% of the armed forces, by design well distributed across units.

As Russia surrounds various groups and it is clear their choices are to die or surrender, the incentives of the neo-Nazis are to keep fighting, since anyone with a Nazi tattoo is likely to be executed or sent to a gulag or if senior, tried for war crimes and then almost certainly executed.

So the incentives of everyone else are to kill the neo-Nazis and surrender. This sort of thing is hardly unprecedented; recall fragging in Vietnam.

Ritter thus thinks the odds are decent that the military will self-cleanse and use that as an argument for Russia winding up its operations sooner rather than later. 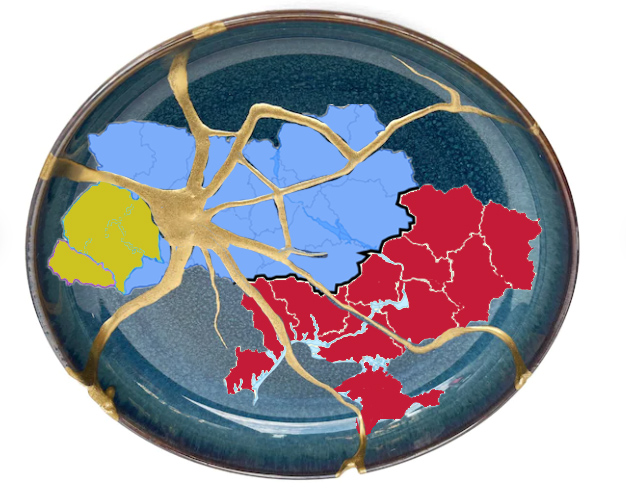 It’s a mark of civilized people that they keep and honour their old things.   When the things are broken, they put the pieces back together again.

In the 19th century rural Americans of northeast states like Pennsylvania did this with their old tablecloths, dresses, and curtains, turning the remnants into patchwork quilts. Starting several  hundred years earlier, the Japanese, having to live in an earthquake zone,  had the idea of restoring broken ceramic dishes, cups, and pots. Instead of trying to make the repairs seamless and invisible, they invented kintsugi (lead image) – this is the art of filling the fracture lines with lacquer, and making of the old thing an altogether new one.

Quite quickly, the Japanese turned cheap lacquer fillings (urushi) into gold (kintsugi) and silver (gintsugi). In this way, a frugal custom of the poor working classes turned into conspicuous consumption of the rich leisure classes.*

The Ukraine is a new thing. Depending on which region, language,  religion, class, and ideology is displayed, it’s newness and oldness are disputable. New or old, however, the civil war in the Ukrainian east since 2014, Russia’s special military operation since February 24, and the US war — currently directed by US officers in the tunnels under the Azovstal factory — to destroy Russia in a fight to the last Ukrainian mean that the country cannot be put back together again the way it was. The Ukraine will have to be repaired and the damage replaced.

Kintsugi requires gold filling for the repaired cracks (lead image). This may not be quite the Ukrainian outcome the Americans, their German and British allies are insisting on, but they must contend with the Russian plan after the battlefield operations of Phase 2 are completed.  This, according to a Moscow source who knows it, is that the Ukraine will be destroyed and preserved in that state. “They don’t need to patch it,” the source says, “they need to keep it broken.”

Colouring the map (lead image) in national colours is wishful thinking. The military manoeuvre maps published from both sides reveal tactical objectives with a lag time, but these don’t reveal strategic plans.

The Russian Defense Ministry, General Staff and their combination with President Vladimir Putin called the Stavka   have not announced what the map will look like; Putin’s most recent statement indicates they are taking their time to decide. This timing, Putin said on Tuesday, “depends on the intensity of the military operations.”   “A lot is said about the United States being ‘ready to fight against Russia to the last Ukrainian.’ This is being said there, and it is being said here, and it is true. It is the essence of the current events.”

But after the fight to the last Ukrainian,  what of the Ukraine?

“Our job,” Putin went on, “is to reach all our goals while minimizing these losses. And we will be acting smoothly and calmly, according to the initial plan of the General Headquarters [Генеральным штабом]. I have spoken about this many times. There is no need to repeat all this at the news conference.”

Putin’s map of the Ukraine? “Actions in certain areas of Ukraine [определённых регионах Украины] are only aimed at containing the enemy, strikes to destroy the military infrastructure and create conditions for more active operations on the territory of Donbass [территории Донбасса].  Meanwhile, the goal of our entire operation, I will repeat what I said in the early hours of February 24, is to help the people living in Donbass who feel inseparably linked to Russia and who have been subjected to genocide for eight years. The only question is how.” 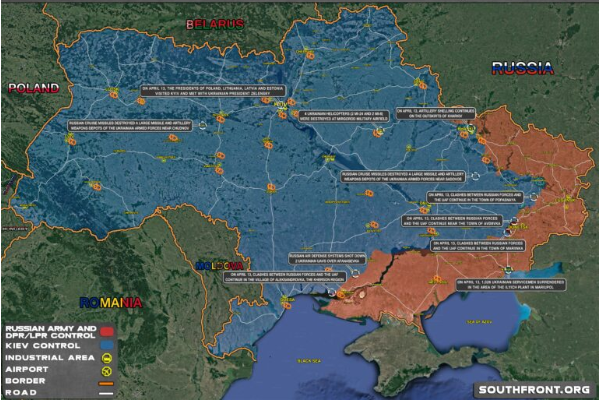 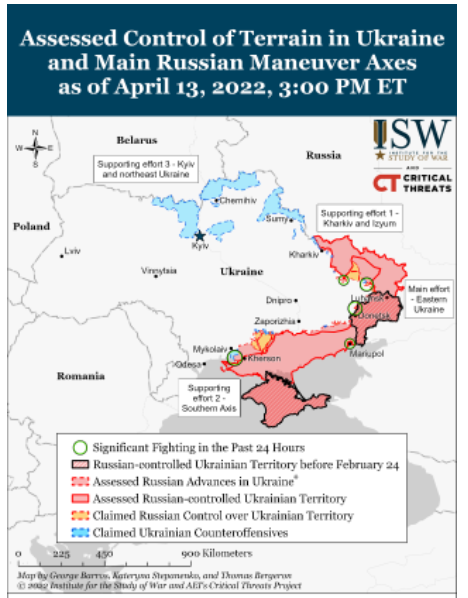 Source: https://www.understandingwar.org/
The Institute for the Study of War, Washington, DC, is directed by this group of state-funded Russia warfighters. 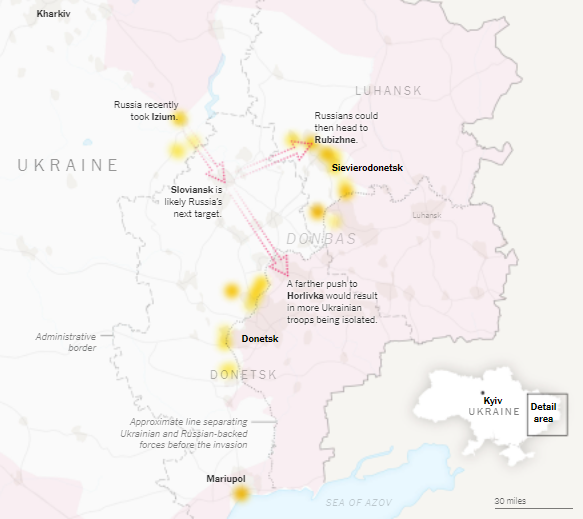 For the battlefield assessments of Jacques Baud, a Swiss Army colonel with NATO staff service now working with the French Intelligence Research Centre in Paris (Cf2R), start here.   For Baud’s analysis of how the Ukraine got to this point.

A Canadian military veteran with NATO warfighting expertise analyzes the operational map this way: “I believe that the Stavka is sucking the Ukrainians in by leaving the east-west corridors open so they are none too concerned, rightly or wrongly, about the deliveries coming from the west.  The Ukrainians are being drawn into the cauldron east of the Dnieper River; this move is also fed by their deep belief in their own propaganda – ‘we chased them away from Kiev!’ ‘We’ve stopped them in Kharkov and the Donbass!’ ‘Mariupol is still resisting!’ They also believe what their US trainers and advisers have been telling them is the effectiveness of NATO weaponry and other support. The constant nonsense about Russian weakness spouted by the media and politicians in safe havens over here does them no good either. This attitude seems to suit the Russians just fine.”

“One thing is certain – the Stavka is calling up very significant reserves while the Ukrainians are scraping the bottom of the barrel domestically and internationally in order to stiffen their lines. A huge fight is certainly brewing now.  Will there be a concerted attack on Ukrainian logistics in concert with the offensive in the East? This is a strong possibility. It also appears that the Ukrainians are feeling the impact of fuel shortages due to the sea blockade and Russian strikes on all fuel depots and stocks from the western borders to eastern hubs like Dniepropetrovsk.”

“What happens when the Stavka says Go! and all those Ukrainians, foreign white supremacists, and mercenaries  get bottled up and destroyed,  despite the weapons deliveries? What happens when the  major US tactic for this war – the establishment of the proxy army flying the SS and other fascist flags — is openly and soundly defeated in this relatively short period of time – a very short period of time for a war fought by a US-led army armed to better than NATO equipment, training and  readiness standards?

“What I am seeing are Russians rehabilitating civil authority, that’s Russian authority from Kherson in the south to Sumy in the north. I don’t believe the Galicians will end up with Odesssa or Kharkov and Sumy. If and when the eastern army is destroyed, Zelensky’s regime may collapse into infighting. He may be lynched or spirited away before the Russians get there.”

A well-informed Moscow source with close contacts among the Donbass leadership expects the future map of the Ukraine to become clear once the next two major battles have been closed – the first for Kramatorsk, the second for Kharkov.

THE BATTLEFIELD MAP FOR KRAMATORSK AND KHARKOV 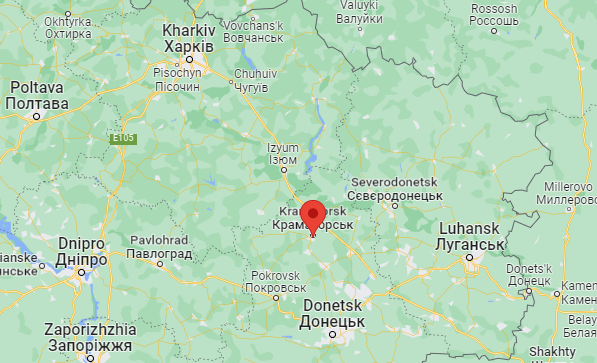 The Russian plan, according to the Donbass leadership, is to reform the Ukraine into “a loose confederation in which the controlling regions will be the eastern Russian-speaking, Orthodox regions of Kharkov, Lugansk, Donetsk, Zaporozhye, Kherson, Nikolaev, Mariupol, and Odessa. They will be run by newly installed administrations and locally recruited security forces, both controlled by Russia. Dniepropetrovsk, Poltava and Kremenchuk are likely to be part of this federal alliance, which will be strong enough to win the next Ukrainian presidential election, replacing Vladimir Zelensky.”  Zelensky’s term is scheduled to end in March 2024. It is likely to end sooner.

The future for Kiev in this new federal polity is still undecided, the sources acknowledge.

According to the Donbass leadership, the future of Galicia in the west is to become “a mini-federation of competing ethnic national groups – Catholic Ukrainians, Hungarians, Slovakians, Poles, Romanians,  and others. Landlocked, without exportable resources except refugees, mercenaries, and girls, blocked by Belarus to the north and Russia to the east, the Galician gun platform which the US and Canada have created around Lvov will be stripped of its political power in Kiev. Their heavy arms, fuel stocks and command centres destroyed, they will be motivated to turn their ideologies and their personal weapons on each other. Between them and the east, this Russian plan for the demilitarization of the country will prevent the return of mass threats and NATO bases east of the Dnieper River.

The sources say this is not a plan for the breakup of the old Ukraine, nor is it a plan for the accession of Novorussia.   It is a plan “to keep the Ukraine broken”, in which the big fracture lines will be moved to the west — and kept there.

[*] To understand and appreciate the Japanese art of kintsugi, look at this.