Lancet study: Fewer than three people a month infected with ebola will try flying out from West Africa [Guardian].

Sierra Leone residents note that ebola spreads around the same routes that the 1991 civil war did [ABC].

To me, it’s quite remarkable to see talks between student leaders and the Hong Kong government broadcast on big screens to thousands occupying Admiralty, no matter the outcome of the talks [Reuters]. What happens if (when) the Mainland takes this in?

Reaction quotes from all sides after talks end [South China Morning Post]. This is the first round; there will be more [BBC].

CY Leung’s problem with democracy: If the public nominates candidates, the population that earns less than the median could dominate the process [WSJ].

[LEUNG:] If it’s entirely a numbers game and numeric representation, then obviously you’d be talking to the half of the people in Hong Kong who earn less than US$1,800 a month.

Obviously, we in the United States have much to teach China, if only they would allow it.

Three arrested in smashing pumpkins protest [St Louis Post-Dispatch]. Pumpkins being a reference to the #pumpkinfest in Keene, NH, a terrifying example of white-on-white crime.

Cops give state legislators crash course in basic police training [St Louis Post-Dispatch]. Check the picture. Pulling out all the stops, aren’t they?

A compilation of Cointelpro-like incidents in Ferguson [Daily Kos].

Ds cave on Ebola both to counter R bedwetting and separate themselves from Obama [WaPo].

“The central bank put lives on”; Yves had explained here  [Bloomberg]. $200 billion a quarter. So where’s my cut?

Fed has no numbers on how many jobs have been crapified [Bloomberg]. Odd!

McDonald’s Q3 profit down 30% on U.S. sales slump, which is odd when you remember that hospitality was a bright spot for September’s retail sales. I guess the market for food-like products isn’t what it was….

Redbook, week of October 18: Retail sales in stores up year-on-year, but not month on month, despite cool weather apparel sales and Halloween on Friday [Bloomberg].

Readers, feel free to contact me with (a) links, and even better (b) sources I should curate regularly, and (c) to find out how to send me images of plants. Vegetables are fine! Fungi are deemed to be honorary plants! See the previous Water Cooler (with plant) here. And here’s today’s plant (Amos): 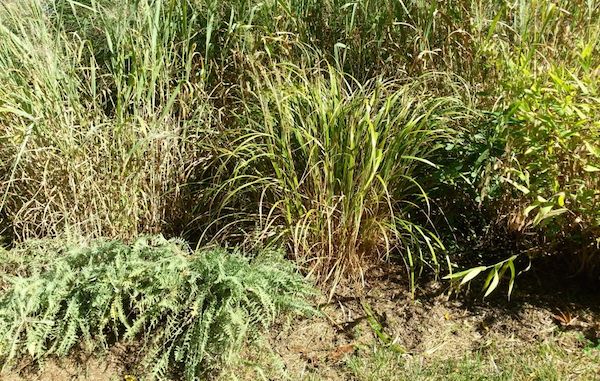 I only hate grass in the form of lawns.