At the end of this post, I’ve embedded a paper by Carl Benedikt Frey, Thor Berger, and Chinchih Chen, all of Oxford Martin, titled Political machinery: did robots swing the 2016 US presidential election? It argues that the propensity to vote for Trump is best explained by the exposure to the local economy of job losses to automation. From the abstract:

Building on the intuition that voters who have lost out to technology are more likely to opt for radical political change, we examine if robots shaped the outcome of the 2016 US presidential election. Pitching technology against a host of alternative explana- tions, including offshoring and trade exposure, we document that the support for Donald Trump was significantly higher in local labour markets more exposed to the adoption of robots. A counterfactual analysis based on our estimates shows that Michigan, Pennsyl- vania, and Wisconsin would have swung in favour of Hillary Clinton if the exposure to robots had not increased in the immediate years leading up to the election, leaving the Democrats with a majority in the Electoral College.

The paper includes an extensive discussion of the impact of automation on the incomes of working people and their political responses during the Industrial Revolution, and find it has strong parallels to the period that started in 1980. I’ve pointed out from time to time that in the first generation of the Industrial Revolution, workers’ standard of living fell. While the authors stress that the topic of the economic impact of the Industrial Revolution is hotly debated, it is extremely difficult to argue that workers wound up better off. As they explain, the automation of textile production ended well paid, skilled trades like hand-loom weaving. Older workers were allegedly unable to adapt to factory life. The result was displaced laborers piled into agricultural work, lowering pay levels there, and with many winding up unemployed

Any change in technology leads almost inevitably to an improvement in the wel- fare of some and a deterioration in that of others. To be sure, it is possible to think of changes in production technology that are Pareto superior, but in prac- tice such occurrences are extremely rare. Unless all individuals accept the verdict of the market outcome, the decision whether to adopt an innovation is likely to be resisted by losers through non-market mechanism and political activism…

During the first six decades of the Indus- trial Revolution, ordinary Englishmen did not see any of the benefits from mechanization: as output expanded, real wages stagnated, leading to a sharp decline in the share of national income accruing to labour. Notably, the trajectories of the American economy over the four decades following the revolution in automation of the 1980s almost exactly mirror the first four decades of the Industrial Revolution in Britain…

Between 1780 and 1840—the classic period of the Industrial Revolution—the lives of ordinary workers got nastier, more brutish, and shorter. The standard of living debate surrounding the Industrial Revolution will probably never settle for good, but the optimists have an in-creasingly difficult case to make as empirical evidence continues to accumulate.4 Almost by any measure, material standards and living conditions for the common Englishman did not improve before 1840. Output expanded, yet the gains from growth did not trickle down to the vast majority of the population. The best estimates suggest that while output per worker increased by 46 per cent over the classic period (Crafts and Harley, 1992), real wages rose by a mere 14 per cent (Feinstein, 1998).5 Meanwhile, working hours increased by 20 per cent (Voth, 2000), suggesting that hourly wages even declined in real terms.6 The main ben- eficiaries were industrialists who saw the profit share of income double (Allen, 2009).

As workers rioted to try to prevent the opening of new factories, the British government turned on them:

During the Luddite risings of 1811–13, rioters achieved nothing more than their predecessors, except forcing the British government to deploy an even larger army: the 12,000 troops sent to resolve the situation exceeded the size of the army which Wellington took into the Peninsula War against Napoleon in 1808.

The authors then turn to America, pointing out, as has often been noted, how the benefits of productivity gains have largely been withheld from ordinary wage earners:

Over the period 1979 to 2013, productivity growth was eight times faster than hourly compensation: as productiv- ity grew by 64.9 per cent, hourly compensation for 80 per cent of the American workforce grew only by 8.2 per cent, while the top 1 per cent of earners saw cumulative gains in an- nual wages of 153.6 per cent (Bivens et al., 2014). The real wages of the vast majority of Americans thus stagnated or even declined. With the exception of a brief period in the late 1990s, the wages of middle-income workers were either flat or in decline, while the wages of low-wage workers fell by 5 per cent. The greatest reversal of fortunes has taken place since the turn of the twenty-first century: between 2000 and 2013, hourly wages fell for the bottom 30 per cent and were flat for the next 40 per cent (Bivens et al., 2014)….According to estimates by Summers (2015), the income distribution of 1979 would leave today’s top 1 per cent with $1 trillion less in annual income, while adding on average $11,000 a year for a family in the bottom 80 per cent.

Although the causes of this detachment are still being debated, a growing body of work has identified automation as one of the prime forces driving the shifts in income shares along the occupational wage distribution. 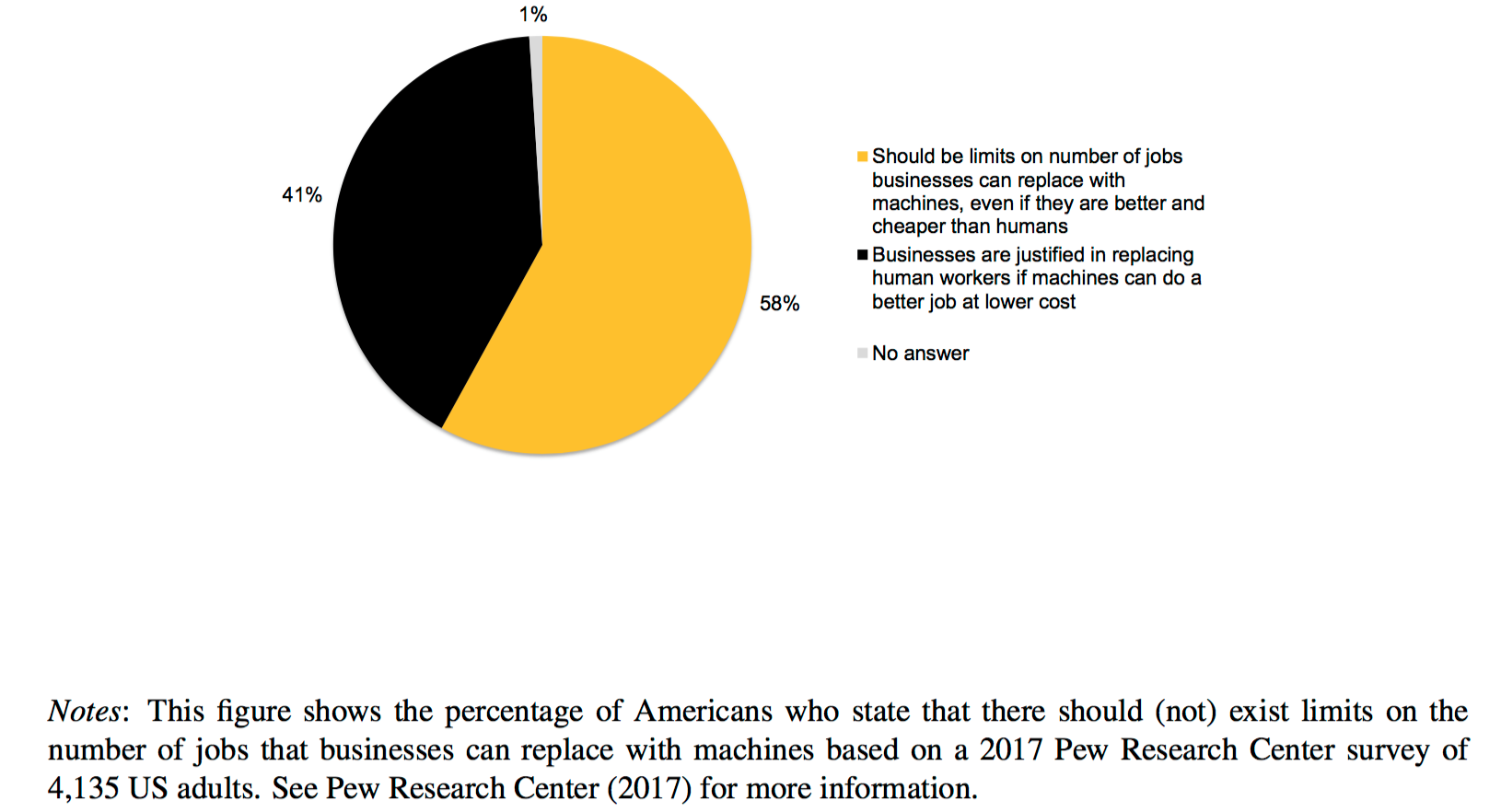 While Trump did not campaign on automation, he did stump for bringing back manufacturing and mining jobs, which are more stable and better paid that low skilled service industry positions. Similarly, exit polls found that 82% of the voters saw Trump as a candidate for change, versus only 14% putting Clinton in that category.

Of course, this disparity underscores the issue made obvious in so many other ways, such as Clinton’s “deplorables” remark, her refusal to stump in Rust Belt states, her focus on small group meeting with wealthy donors even when she did campaign. As Thomas Frank has stressed, the Democrats have become the party of the top 10%, the professionals plus the technical and managerial elite. And Hillary made no effort to pretend otherwise. She, like so many other pundits, offered at best hollow “Let them eat training” solutions to the problem of loss of skilled jobs and downward mobility.

The bulk of the paper goes though the analysis that identified county-level exposure of jobs to displacement by robots and in particular how that exposure changed between 2012 and 2016, as well as testing the exposure to offshoring, routinization, and trade competition. The final section of the paper looks at the counterfactual: What if exposure to robots had not risen in the years immediately before the 2016 election?

The authors warned early on:

This process of creative destruction, upon which long-run growth ultimately rests, has always created both winners and losers in the labour market. Because creative destruction comes with social costs—as some workers see their incomes disappear, are forced to migrate, and may experience episodes of unemployment—it may lead to social unrest, in turn threat-ening the power of incumbent political leaders.

To avoid further populist rebellion and a looming backlash against technology itself, governments must find ways of making the benefits from automation more widely shared.